Ernest Hemingway completed seven novels, six short story collections and two non-fiction works in his lifetime—and three more novels, four short story collections and three non-fiction works that were published after his death. He received the Nobel Prize in Literature in 1954 for The Old Man and the Sea, influencing generations of writers with his concise sentences and brash style.
Still, despite being one of the greatest literary giants of all time, Hemingway’s writing is only one arm of his legacy.

War hero and correspondent, big-game hunter, world-class fisherman, Nazi-hunter, boxer, football player, and reigning holder of the world’s most manly beard—Hemingway is without a doubt, one of the most interesting writers of all time.

Here’s a list of Hemingway’s top 8 interesting facts and exploits.

1. Hemingway patrolled the Cuban coast, hunting for Nazi U-boats with grenades and his machine gun. 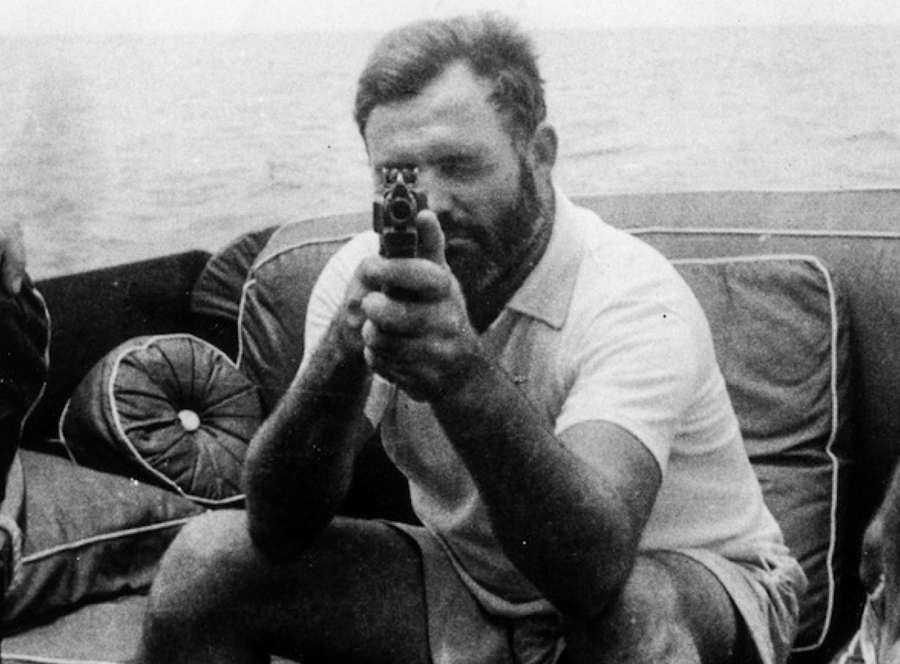 At the beginning of WWII, Roosevelt had asked for a number of volunteers to patrol the coast in search of enemy boats. If any Nazi ships or submarines were spotted, the volunteers would call for backup, remaining (relatively) safely out of harm’s way.

Though Hemingway was one of these volunteers, his idea of patrol followed a slightly bloodier repertoire—if he found Nazis, he wanted to be the one to take them down. So between the years of 1942 and 1943, Hemingway would sail Cuba’s northern waters looking for Nazi U-Boats, armed with his machine gun and a bounty of hand grenades.

Hemingway never caught sight of any Nazi boats. Lucky for him too, as—all valor aside—the odds of taking down a Navy submarine with a machine gun and crew of one would be, to put it lightly, near fucking impossible. 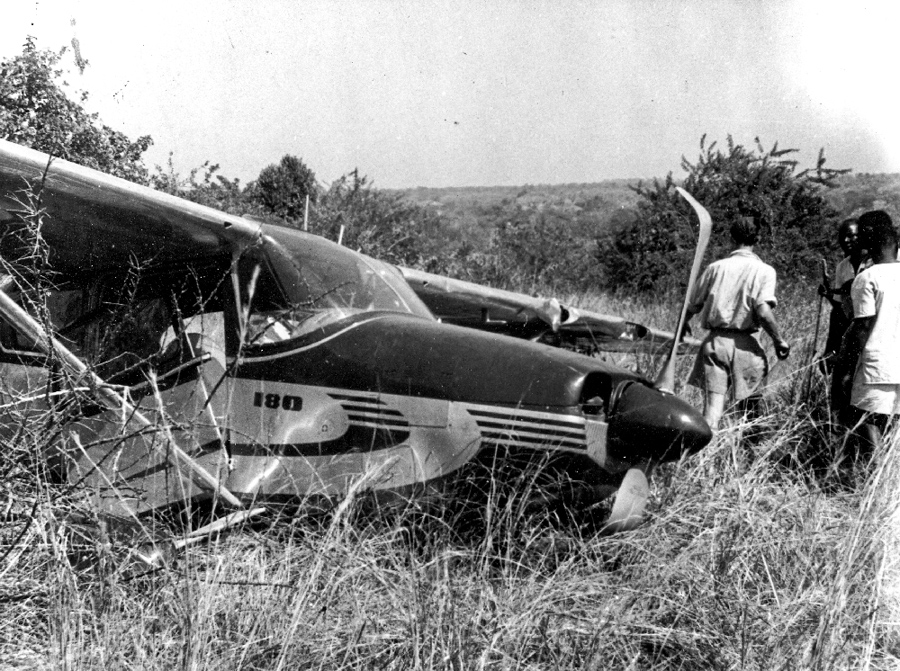 Hemingway was one tough, if unlucky, bastard. Throughout his lifetime, he suffered the following list of injuries:

It’s tough to believe that anyone could survive such a dreary series of injuries—especially the duo-plane crash incident. In fact, his survival was so unbelievable that he had the pleasure of reading his own obituaries in the paper the following day—a group of reporters having already assumed his death.

In fact, the only thing that could kill Hemingway was Hemingway himself with his tragic suicide in the summer of 1961.

3. Hemingway was drinking-buddies with numerous literary and artistic giants: 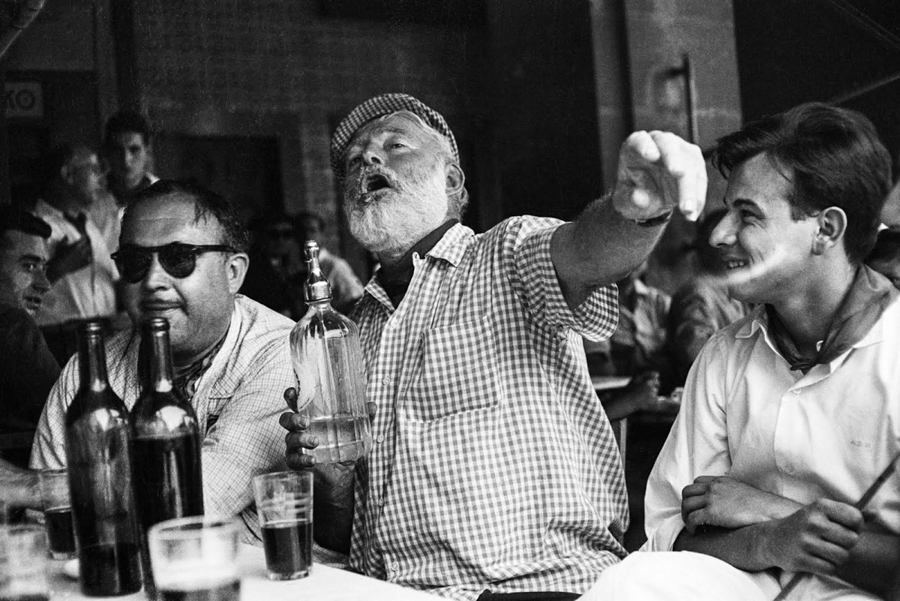 In 1921 Hemingway moved to Paris to do foreign correspondence, where he would meet, and work under the influence of literary giants including James Joyce, Ezra Pound, F. Scott Fitzgerald and Gertrude Stein. Hemingway also became acquaintances with Pablo Picasso, Juan Gris and Joan Miró.

In 1924, James Joyce and Hemingway became avid drinking partners, taking off on rampant binge drinking sessions. Allegedly, Joyce would get into arguments at the bar, and just before the fight broke out, he would call in Hemingway to step in and finish the job.

4. Hemingway stole the urinal from his favourite bar: 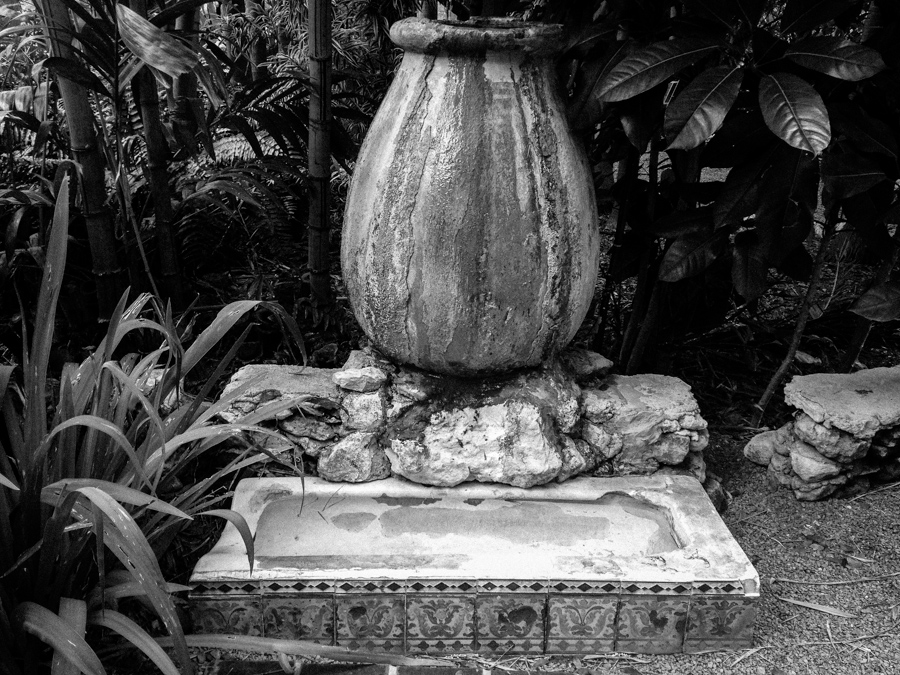 Hemingway was a notorious alcoholic, spending a great deal of time at his favourite Key West bar, Sloppy Joe’s. One time, while the bar was under renovations, Hemingway took the urinal home with him claiming ownership over it as he had “pissed away” enough money in the urinal to call it his own. Hemingway converted the urinal into a fountain, which he proudly mounted in his front yard.

5. On fishing trips, Hemingway would gun down sharks with a machine gun. 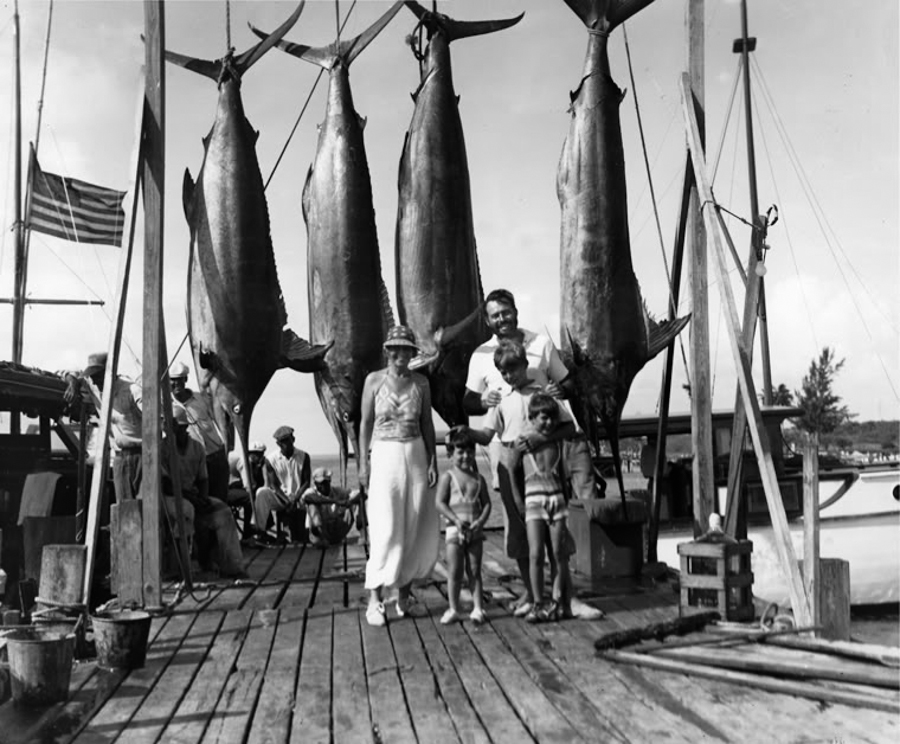 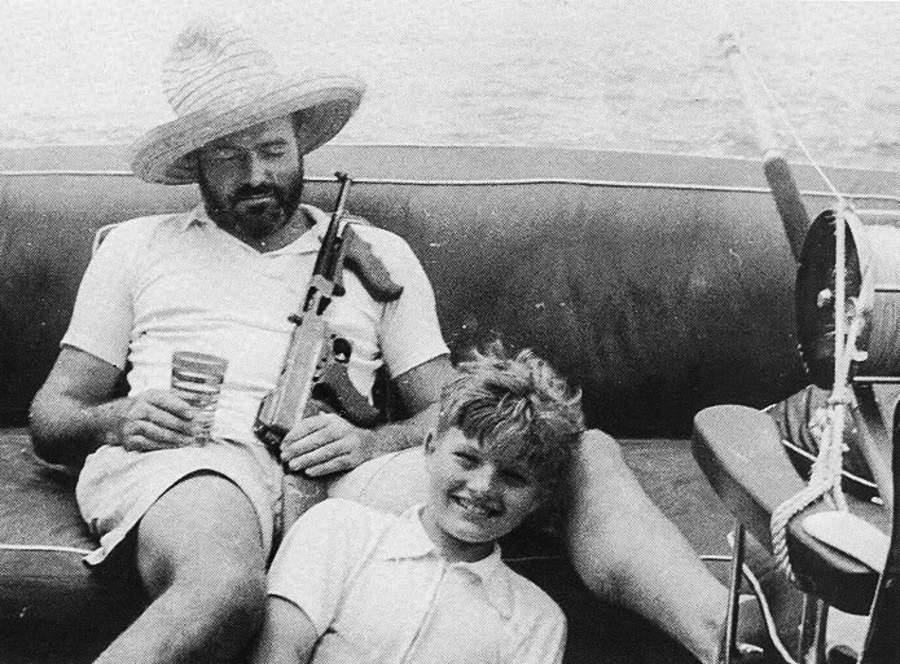 Hemingway was infamous for his big game hunting, which occasionally, even included sharks. In order to prevent the sharks from eating the fish he reeled in—and he reeled in a lot of big fish—Hemingway would take out his machine gun and pump the sharks full of ammunition. In 1938, Hemingway set a world record for catching seven marlin in one outing.

6. Hemingway was an ambulance driver, war correspondent and war hero in WWI and WWII. 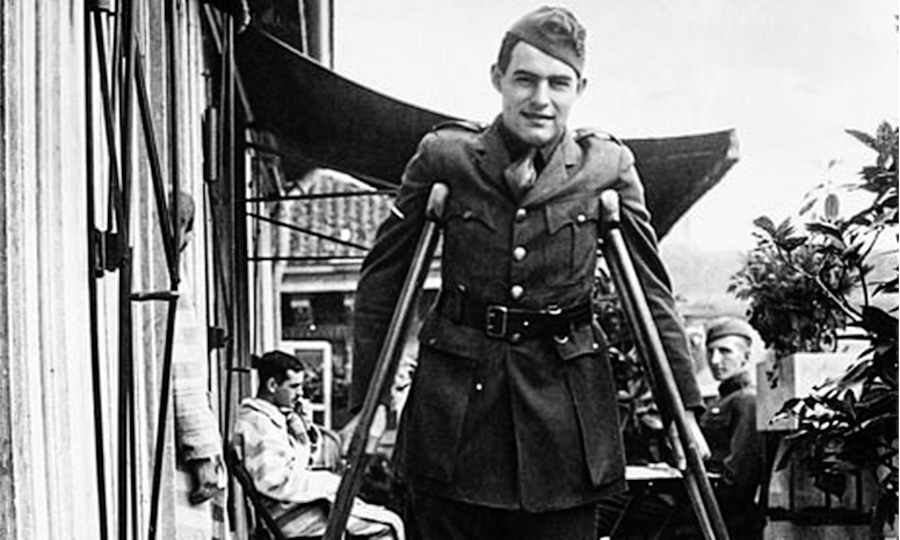 At 18, Hemingway enlisted to drive ambulance through the frozen valleys of the Italian Front in WWI—a bloody mess of trench warfare in the low-hanging pockets of the mountains. Despite being struck by mortar fire, resulting in severe injury, Hemingway continued to lead fellow soldiers to safety, earning him the Italian Silver Medal of Bravery before retiring home to complete his 1929 classic novel, A Farewell to Arms.

From this incident, Hemingway is quoted, “When you go to war as a boy you have a great illusion of immortality. Other people get killed; not you … Then when you are badly wounded the first time you lose that illusion and you know it can happen to you.”

However, this was only the beginning of Hemingway’s long list of war exploits. He went to war again, during both the D-Day Normandy landings and the liberation of Paris in 1944.

During WWII, Hemingway earned a Bronze Star, an award of bravery. He was thoroughly recognized for his immersive journalism, situating himself in areas of combat heavy with enemy fire. He was enthusiastic to attain an experience of war that accurately portrayed the conditions.

Hemingway was also a foreign correspondent for the Spanish Civil War.

7. Despite being a mere war correspondent, Hemingway (illegally) led a number of troops in WWII. 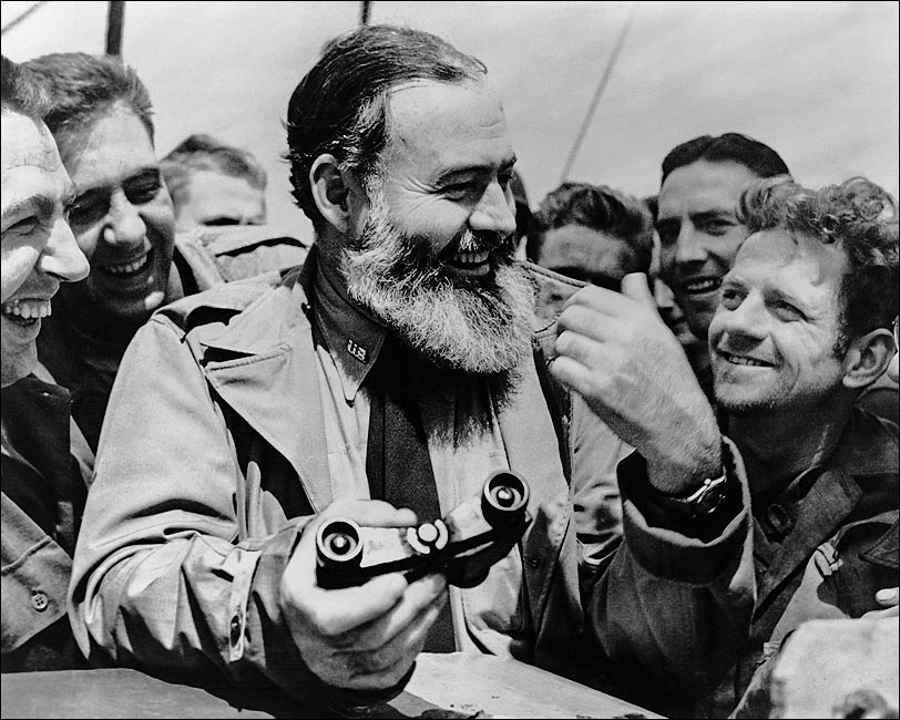 Harnessing an astute knowledge of war from his experiences in the Spanish Civil War and in Italy during WWI, Hemingway assisted ship officers with various initiatives, and adopted the roll of self-appointed infantry captain to lead “Resistance people” in WWII Paris.

According to historian Paul Fussell, “Hemingway got into considerable trouble playing infantry captain to a group of Resistance people that he gathered because a correspondent is not supposed to lead troops, even if he does it well.”

8. Hemingway joined the Soviet Union security agency, KGB, and was put under government and FBI surveillance. 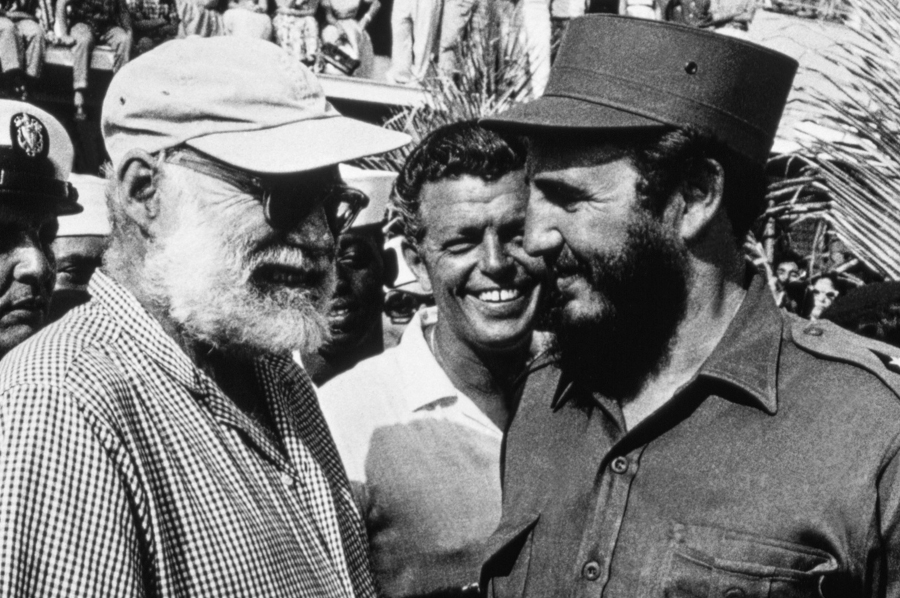 Hemingway’s dwindling years consisted largely of alcoholism and paranoia—the latter proving justified by J. Edgar Hoover’s personal orders to put Hemingway under FBI surveillance. These actions, too, may have been justified as Hemingway was listed as an American agent for the KGB, recruited in 1941 under the moniker “Argo.” Despite his alleged willingness to help the KGB, Hemingway never actually provided any useful information, leaving many to assume that his involvement was under the sole intention of gaining additional literary inspiration.