Football hooliganism: a contrasting tale of Brits, Russians and Irishmen

Smashed beer bottles, torn flags, blood spatters, broken chairs, empty tear gas canisters, and scraps of metal littered the streets of the usually tranquil seaside city of Marseille, France after a huge brawl between rival groups and police in mid-June. One look at the scene and you would think a war had broken out. The French Gendarmerie–a national arm of the French police–circled the scene the following morning, sporting military-grade riot gear, painted pitch black for tactical reasons. It’s a lot more intimidating than the “friendly” blue uniforms worn by the municipal police.

This wasn’t a war, however, at least not one that will make the history books. This was the aftermath of a full day of clashes between Russian and English fans, and subsequently the police, during the 2016 Euro Cup, which has so far resembled more of a curse for its French hosts than a blessing. As France deals not only with the normal security threats that come with hosting a large sporting event, but also  threats from extremist groups such as ISIS following the Paris attacks in 2015, it doesn’t seem French police were quite prepared to also deal with drunk, unruly hooligans.

If you’re a true football fan, then these types of riots and brawls may not seem out of the ordinary. The fact is they happen. John Brewin, a writer for ESPN, wrote in 2015 that although “hooliganism” is a “dying problem in English football,” its historical, cultural significance still rings true. Once referred to as “The English Disease” in the 1960s, English fans are known for their rowdy behavior on the football pitch and in the bars outside, but fans from other countries have also had their fair share of football hooliganism.

For example following Brazil’s loss in the 2014 World Cup final against Germany in Rio, Brazilian fans wallowed in their disappointment by setting fire to cars and buses. In 2013, football related deaths were reported in Argentina, Colombia, and Brazil, as well as countries in North Africa and Eastern Europe.  In some cases, football hooliganism is random, but in others, it is well organized and intentional.

In particular, the recent football riots in France have an ugly undertone that we would be remiss to ignore. There are real social issues that hide within the insults, curses, and bits of anger–particularly racism, ethno-centrism, and national resentment. These clashes come at a time when it appears Europe is slowly tearing at the seams–just weeks before the Brexit referendum, months following Russian President Vladimir Putin’s continued controversial actions in Eastern Europe, and in the midst of heated debates regarding the “migrant crisis.”

During the riots, British and Russian hooligans battled each other for hours. Many witnesses stated that the Russian hooligans appeared well prepared, organized and possibly supported (or at least encouraged) by the Russian government. Following the incidents, a senior Russian parliamentarian reportedly tweeted at his fellow Russian fans, “Well done lads, keep it up!” After a draw between the English and Russian teams in the Marseille match, a group of Russian hooligans reportedly charged at the English fans. Whether supported by their government or not, the animosity between the two groups was tangible. This type of national animosity flaring up during such sporting events isn’t rare however.

Athletic events are realms in which other major issues in society, often related to class, religion, ethnicity, politics, regionalism, historical rivalries, etc. can play out among supporters. Violence, rather than just being about the sport, can be interpreted as an expression of contrasts between populations. That means the conflicts are best studied within the societies where they occur.

This can be seen at all levels of sporting competitions, from high school football games to major international sports tournaments, such as the Olympics or the World Cup. As an avid sports fan myself (particularly the NFL’s Carolina Panthers), I’ve taunted my fair share of rival fans, but what turns small, nonviolent acts of vocal jeering into dangerous, physical acts of violence? Dr. Daniel Wann, a professor at Murray State University argues that fans can become violent during sporting events because they “see their team as an extension of themselves, and feel personally threatened by a loss.” Fans can also be egged on by overzealous security forces, dressed in riot gear to prevent the very violence their presence may encourage.

This theory fits well with the instances of spectator violence fuelled by racial tensions, such as the race riots that broke out following the defeat of American boxer James Jeffries at the hands of African American boxer Jack Johnson, in 1910.

Or the 1933 Christie Pits riot that erupted in Toronto, Canada during a local baseball game between St. Peters–a predominately white, Catholic team–and the Harbord Playground–a predominately Jewish team. The Pit Gang, a group of Nazi sympathizers and supporters of St. Peters, unraveled a large white sheet sporting a black swastika during the game prompting a massive brawl for several hours. It was an explosion of racial tensions that had been simmering for months and even years.

What the world witnessed in Marseilles this past June was another manifestation of similar types of social tensions as those seen in 1910 and in 1933, along many different lines, such as race, ethnicity, and regionalism. These bouts of violence do not always remain isolated between rival groups of hooligans, however. Several videos also appeared after the June 11 riots that showed English and Welsh football fans taunting what appeared to be migrant children who were begging for change in the French city of Lille.

In the videos, several children are seen standing outside a crowded pub where the fans had gathered ahead of a match. The fans, noticing the children, start to toss coins at them, laughing as the children scramble to pick them up. One fan in particular, purportedly taunts a child with a coin, by waving it in front of the child’s face and then throwing it away so he has to fetch it. To be completely honest, it’s an absolutely sickening scene to watch.

Although this type of behavior was perpetrated by only a minority of the football fans gathered in France for the Euro Cup, it has far-reaching negative effects, not only for those children who were mocked because of their desperation, but also for all of the peaceful and respectable football fans gathered in France to experience the sense of community and cultural exchange that football can provide.

Luckily, we have the Irish to restore hope in football fandom. 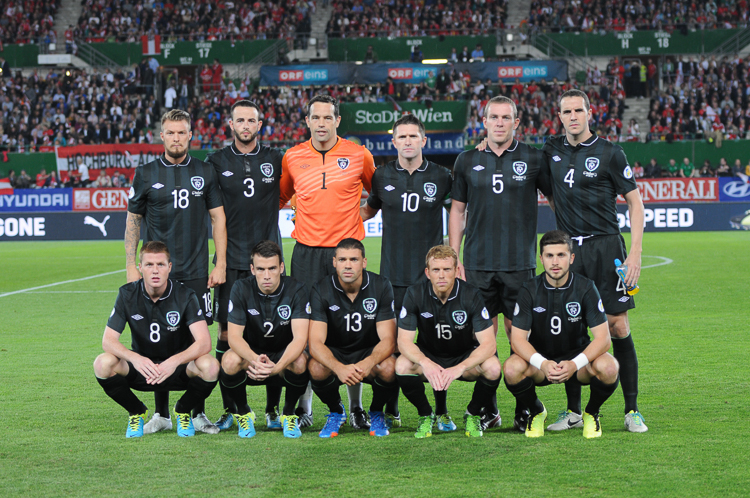 The Internet has been inundated over the past few days with reports and videos of fans from both the Republic of Ireland and Northern Ireland showcasing their good-heartedness, even when they are piss-drunk. In one video, Irish fans are seen stumbling around the streets of France following a match, but they’re not throwing bottles and chairs. Instead they’re dutifully cleaning up the trash left behind chanting “Clean up! For the Boys in Green!” They’ve also been seen singing “Twinkle, Twinkle Little Star” to a baby on the metro, serenading a French woman on the streets of Bordeaux, and reciting “Holy Father” to a nun on a train.

Unfortunately, Ireland has a historically bad record when it comes to international football matches, but they’ve learned to lose with grace. After their most recent loss during the Euro Cup, a patch of green was still seen from the sky in the stadium as the fans continued to chant and sing to their beloved team. In fact, the Irish fans have done so many good deeds during their short run in France, that European media outlets have dedicated articles lamenting their departure. Prophetically, Stephan Reich–a journalist for the German magazine 11Freunde–wrote in 2015 after the Republic of Ireland qualified for the 2016 Euro Cup, that the world would indeed “need the Irish fans” in France the following summer. He said:

The qualification of the Irish is a godsend. The Boys in Green can celebrate like no other nation, always peaceful, always sympathetic and emphatic, with an infectious childlike joy. They’ll bring huge numbers of good-humored people prepared to experience a piece of joy. For this then, we look forward, even if pleasure is difficult at this moment. But as Paris is about life, football is also about life. And the Irish are the best proof.

Reich couldn’t have been more right. Despite the bouts of hooliganism and riots between English and Russian fans, the intense security threats facing the event, and the social tensions manifesting in Europe, the Irish were proof that football–and indeed the world–is more than just rivalries, divisions, and violence caused by drunken assholes. Camaraderie, joy, and sportsmanship have a place too, even after a few rounds of Guinness.