I have yet to meet someone who actually loves flying. Waiting at the airport, squishing down those tiny aisles to find your seat, which usually ends up being in between the woman with the screaming baby and the man who can’t stop farting and sneezing, having your ears pop when the plane takes off, turbulence that makes your stomach shake, and don’t even get me started on the hassle that is trying to use that tiny bathroom, while a line forms behind you in the aisle. Long story short – the quicker the flight the better.

Now, quick flights could be coming our way very soon. Richard Branson, founder of the Virgin Group, recently announced that he wants to launch supersonic passenger flights that would speed up travel exponentially. 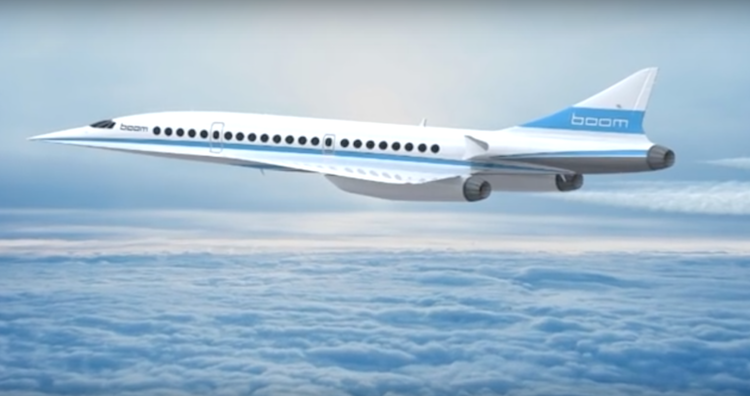 According to IFLS, the plane will use three engines and be capable of flying at speeds of 1,451 miles per hour. In other words a plane ride from New York to London would only take three hours and 15 minutes – cutting the current flight time in half. Similarly a flight from San Francisco to Tokyo would only take five hours and 30 minutes, and Los Angeles to Sydney would be six hours and 45 minutes.

Virgin Group will partner with Colorado-based Boom Technologies to develop a passenger plane called XB-1, also known as “Baby Boom”. If all goes according to plan, it will be in the air by late 2017. The Baby Boom will be able to accommodate 45 passengers and will be decked out with “home comfort technology”.

Of course one of the biggest concerns is how environmentally-friendly the plane actually is. According to the website, “Fuel efficiency and operating costs go hand in hand. Since our aircraft has the same fuel burn as subsonic business class, it also has the same fuel consumption and emissions profile. We continue to innovate toward lower fares—which will mean further reductions in fuel consumption and emissions.”

The Baby Boom has been branded as offering “affordable” prices, but a round-trip flight from New York to London will set you back $5,000. Which is actually a lot cheaper than former supersonic passenger airliner, the Concorde. According to Inhabitat, the average price of a flight with the Concorde was $12,000, and the Baby Boom is even faster than its predecessor.

Blake Scholl, the CEO of Boom and Branson’s business partner, said that tickets will end up costing about the same as business class.  “Ultimately I want people to be able to get anywhere in the world in five hours for $100,” Scholl told the Guardian. “To get there you have to improve fuel efficiency, but step-by-step supersonic air travel will become available for everyone.”