At 9am you stumble into your office through a sea of relentless morning “hello’s!” from cheery co-workers who evidently don’t know how to enjoy a late night cocktail. Though you show up at 9:00, work doesn’t start until at least twelve, the next three hours dedicated to keeping your eyelids off your cheeks and maintaining the illusion of focus. Unfortunately, your body is desensitized to caffeine from years of abuse and excessive sleep deprivation rendering coffee useless.

For anyone who doesn’t identify as a morning person, one of life’s greatest struggles is reoccurring between the hours of nine and noon. However, it turns out that napping—in your car, at your desk, behind the copy machine—is by far the quickest launching point for productivity. Although napping on the job is frowned upon and most frequently replaced by caffeine, if you’re sitting at your desk, your eyelids growing heavy with the weight of mid-day exhaustion, the 10 – 20 minute power-nap will rejuvenate you to a significantly higher degree than a coffee or Red Bull.

Companies are starting to realize that napping is by far the quickest launching point for productivity.

Although many people reject the idea of a nap—likely due to experiences of waking up more exhausted than they were before—the secret is accurately measuring your sleep time to fall within the first two sleep cycles. There are four main stages of sleep: the first two are light, and the third is a gateway into a deeper state that will eventually escalade into R.E.M. sleep. For this reason, naps that last 30 minutes or more reportedly launch your mind into a state of “sleep inertia” where it’s difficult to wake up, and you suffer the ills of post-nap grogginess, cotton mouth and a general disdain for being awake.

Stage one is also useless, but stage two is just long enough for your subconscious to begin sorting your thoughts and memories, and allocating them to useful compartments in your mind. The benefits of this stage include an increased capacity for memory, creativity, cognitive function and overall productivity, according to ASAP Science.

There are four main stages of sleep: the first two are light, and the third is a gateway into a deeper state that will eventually escalade into R.E.M. sleep. 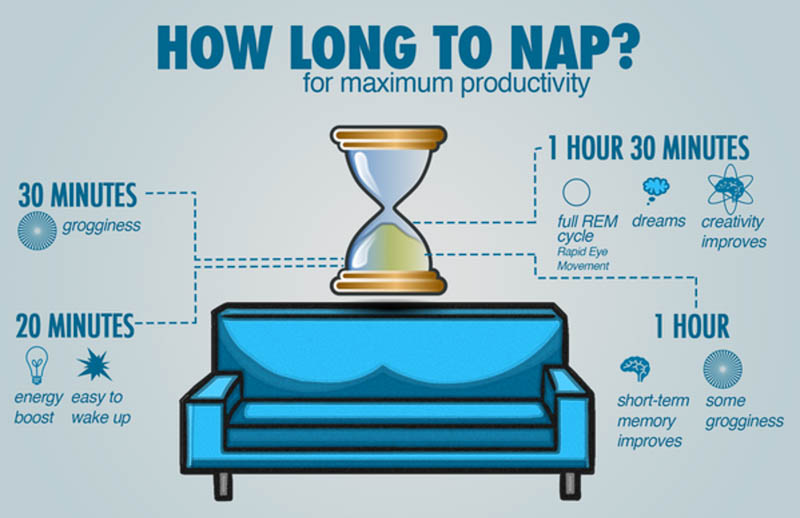 As sleep expert, Dr. Michael Breus, tells the Wall Street Journal, “If you take it longer than 30 minutes, you end up in deep sleep. Have you ever taken a nap and felt worse when you woke up? That’s what’s happening — you’re sleeping too long and you’re going into a stage of sleep that’s very difficult to get out of.” However, According to Dr. Sara Mednick, assistant psychology professor at the University of California, Riverside, a long enough nap has its benefits as well. In comparison to the 10 – 20 minute sleep cycle, “the 90-minute nap will likely involve a full cycle of sleep, which aids creativity and emotional and procedural memory, such as learning how to ride a bike.” The trick is timing your nap properly to fall within a beneficial duration. However, one should be wary about napping after 4:00pm, as it could interfere with your ability to fall asleep later that night.