Why do Artists Have to be Poor and Fucked Up? A Portrait of Author Andrew Kaufman

Andrew Kaufman writes in a notebook, seated at a tiny circular table in a courtyard. The tiles below him are stone, and the building above him is beige stucco. It’s a mere façade, though, standing above a bakery display and a case of cold soda and water bottles. This fake courtyard in the Loblaws at Christie and Dupont Streets is where Kaufman, a 40-something Toronto author, writes. Because once he’s done, he can grab groceries for his wife, Marlo, and young children Frieda and Phoenix. He doesn’t have to separate his two selves—writer and father. Here, under the too-bright fluorescent lights of a supermarket on a Sunday night, these two parts of him are one and the same.

Kaufman is the internationally published author of four books. His first, 2003’s All My Friends Are Superheroes, a beloved novella, is one of Coach House’s bestsellers, published in 13 countries. Its success led him to a two-book deal with Random House, and to become the first Canadian author to publish a novella with Massachusetts-based Madras Press. Kaufman writes a hybrid of literary and magical realism, and it’s not uncommon within his work for a talking frogwoman to coexist with themes of grief and loss. Kaufman has scruffy brown hair and thick black glasses, and he uses a typewriter; he easily fits the hipster Toronto writer archetype. But he loves the comforting life he has created with his wife and young children. That is all he ever wanted. 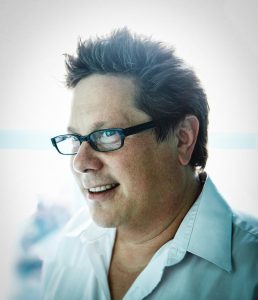 When I meet Kaufman in the Loblaws café, he closes his notebook. “I came with a list,” he says cheerfully, wearing a brown CBC Radio T-shirt, jeans, sneakers, and a black coat. He rushes outside and comes back with a shopping cart. The moment we begin our walk around the store, he runs into another father from his neighbourhood. They discuss plans for an upcoming children’s birthday party. Kaufman mentions he’s flying to Vancouver in a few days for a reading at the University of British Columbia Bookstore.

Kaufman’s work defies conventional Canadian literature—those stories of the Prairie landscape and hockey played on frozen-over ponds—and yet he’s doing okay. When his first book was published, he was single and living in a bachelor apartment; now, he is married with young kids and a house behind Christie Pits.

Kaufman always wanted to be a writer. He grew up in the small town of Wingham, Ontario. His mother was a librarian, his father an accountant. It was a stable, normal childhood. He was a good student and loved long-distance running. His friends called him A.J. (and still do). Once, at a concert in Toronto, a girl asked what the initials stood for and Kaufman said, “Andrew Jesus.”

Kaufman knew he wanted to be a published author at age 12 but told himself he wouldn’t worry about it until he was 35. After graduating from Waterloo’s Wilfred Laurier University in 1991 with a B.A. in English, he moved to Toronto and submitted short stories to literary journals. He was rejected every time.

He had three serious relationships and three bad break-ups. In the mid-’90s, he wrote short radio pieces for CBC and eventually landed a job there. He had faced so much rejection that he focused on making well-received short films. In 1999, he met the film editor Marlo Miazga at a directors’ residency at the Canadian Film Centre. Now she’s his wife. “In the ’90s, it was easier to get a short film made or funded. I finished the residency and never wanted to make a film again,” says Kaufman. He put together a greatest hits package of his short stories and turned them into All My Friends Are Superheroes. Remember the published-by-35 rule? He was 34. 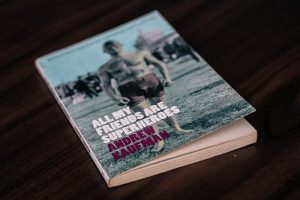 “The day after my 35th birthday, Alana [Wilcox, editorial director of Coach House,] called me,” says Kaufman. “At first I didn’t believe that she was real. It was just too much of a coincidence. I believed the superstition so much that the day I sent it out, I took the afternoon off work and literally stared at the clock. I’d spent a lot of emotional energy writing and got nothing but rejection. I set the 35 limit and said to myself, you have to admit it’s not going to happen for you and you have to decide what your real grown-up career is going to be.” He pauses and smiles. “So yeah, that was a long night.”

By his second novel, 2010’s The Waterproof Bible, Kaufman was channelling the emotions from his life changes into his fiction. His novella, The Tiny Wife, is about a woman who keeps shrinking until she disappears completely. His latest book, Born Weird, examines what it means to be part of a family that knows how strange you are. He had always respected the middle-class lifestyle, and now it was his.

But like the moments of charm in his work, Kaufman brings humour to his role as a father. “Now for the embarrassing stuff,” Kaufman says as we meander through the store. “I’m going to buy the children hot dogs.” He grimaces at the lettuce. “Is that it?” He picks up a head of lettuce and makes a face. “Uck! Horrible romaine.” His humour also comes out when he discusses writing for television—he says the threat of being fired is always there. “Whenever I get too convinced of my genius, it’s great to take a TV gig and get fired. Like, man, I think I suck.”

Kaufman’s office and nearby neighbourhood, Toronto’s St. Clair West, symbolizes him: part hipster, part middle class. His office has distressed brick walls, Starbucks cups on his desk, an overflowing garbage can, his children’s drawings on one wall. There are stacks of records and plenty of novels. We go to a nearby café and by the time the Café Con Leche he orders is gone, he’s decided that the typical story of an artist is one he doesn’t lust after.

“Growing up, the idea of being a drunken poet, trying every drug you could, that sort of bohemian lifestyle was what an artist was supposed to be,” Kaufman says. “That is still the accepted pattern. I don’t do that. I’m much more happy with the middle-class life. I feel like the only way for an artist to rebel right now is to have and explore the middle-class life. I don’t want to be poor and fucked up. Why do artists have to be poor and fucked up?” He pauses and grins. “I could go on and on….” And he does.

The list of writers who have succumbed to drugs and alcohol and mental illness is long. There’s Hemingway, a heavy drinker. Many of Stephen King’s novels were written while in a cocaine or alcohol-induced haze. That has never been Kaufman’s life. He credits his happy childhood with giving him space to learn how to write. At his book launch for Born Weird, CBC’s Nora Young called his family “so nuclear it glows.”

We stand in line at the cash, and Kaufman notices the skinny man in the nearby line wearing tight pink pants and a puffy highlighter yellow ski jacket, holding a bag of Cheetos. His grey hair sticks out. Kaufman invents the man’s life story, and I get the feeling this is part of his routine. He muses that the man was part of a band, local heroes that never got over their lack of success. He says it scares him—that you could think you look great, but then you’re wearing pink pants and a yellow ski jacket in the middle of Loblaws. He wonders if he’s doing that, too. He loads his groceries onto the conveyer belt. He likes to pack them in the order of what will go in the fridge and the pantry.

We leave the store and Kaufman waves before pushing his cart into the parking lot. The scene is a contradiction: a hipster-ish writer whose rebellion is raising his kids and writing in a busy, over-lit supermarket café. “That’s the myth,” he says. “Someone who drinks a bottle of Scotch in the morning is for some reason thought of as a more noble storyteller than someone who cooks for their kids.”