Drive a few hours north of San Francisco and you will find an untouched landscape.

As the morning light breaches a thick layer of fog, the winding rivers and towering redwoods of the iconic American Coast slowly begin to reveal themselves. There are tourists who drive their RVs up and down these logging roads all summer long, unaware of a secret world that does not exist on any road map. It takes a keen eye to recognize the unmarked dirt roads that welcome you to Cannabis Country, a magical place where communities of marijuana growers cultivate giant plants that grow in full sun.

H. Lee arrived in Humboldt County in 2004 and lived on a farm there until 2010, when California seemed as if it might not only permit medical marijuana but also legalize weed across the board. She had been in the “Emerald Triangle” long enough to gain their trust, and with growers becoming less fearful of police raids in a growing culture of acceptance, they allowed her to spend a year photographing a full season of plant production.

“The first time I entered this world, I was totally ignorant to the world of pot farming and riddled with judgment. It took some time for my outsider eyes to adjust to see what was all around me—behind locked gates and camouflaged cabins, past generators and barking dogs, protective firearms and diesel trucks is an eclectic group, bound together by a deep knowledge of growing techniques, along with a strong distrust for outsiders; suspicion is a necessary survival trait. These farmers are lured by the single magical and medicinal plant; a plant whose cultivation or possession holds the promise of profit, coupled with possible jail time. As state and local laws, along with public acceptance, are now changing, this once-furtive farming community is coming out of its greenhouses, building bigger ones and growing giant plants in full sun, less fearful of the hum of helicopters, more exposed and confident than ever before.”

Cameras are obviously unpopular up in those hills, so H. Lee published Grassland under a pseudonym to protect her identity and that of her subjects. She has come to understand and celebrate this unique and protective community so strong in its connection with plant life. Perhaps these photos will reveal that making a plant illegal is but a cruel joke on Mother Nature—and on us. 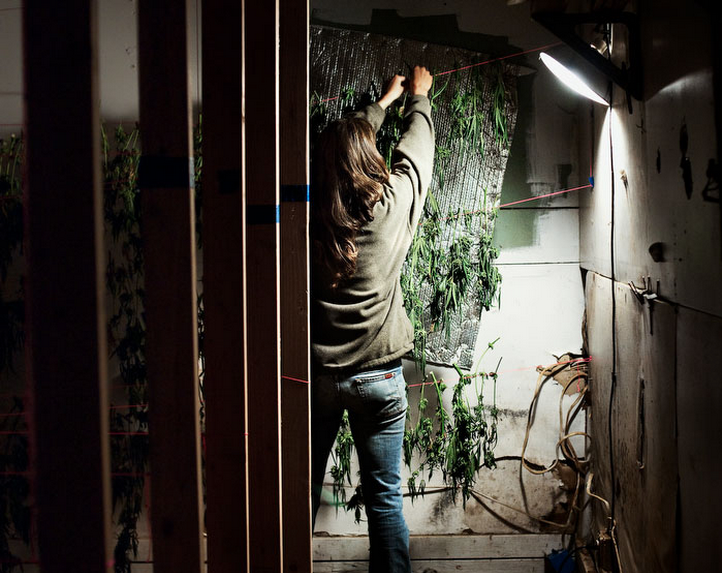