This Toronto bar lets you play with Legos while you drink

I’m hunched over in a corner of the Gladstone Hotel’s Melody Bar taking deep sips out of my copper beverage. I’m desperately pulling a thin piece of Lego from a thicker brick, but they’re not separating. “You need nails,” the woman next to me says. I sigh deeply.

Late last January, the Melody Bar began hosting a weekly ‘Lego + Lagers’ night, combining beer with the classic childhood toy. Every Tuesday after 5 p.m., anyone can show up, grab a box of Lego and go nuts. People seem to like the idea; the event has hit capacity before and had to turn people away at the door, staff member Justin Maguire told the Ryersonian.

I show up around 9 p.m. Two frescoed pillars stand proudly in the room’s centre, their mottled exterior contrasting against the rest of the aesthetically pleasing, stylistically indefinable room. Sofas and rugs sit across corners and among tables. The space is huge, easily holding 75 seats.

But I’m not here for the view. And after my first beer, my bartender Molly redirects me to a DJ-turned-Lego master who is overseeing the entire process in his booth. He asks me what I want to build. I tell him something that flies. He helps me pick out a light blue box filled with a bunch of random Legos that seem to have a space theme. Now we’re talking.

Molly has refilled my drink by the time I’m back to my seat. Boneshaker’s 7.1 per cent alcohol content has already got me feeling light-headed and I’m cursing myself internally for not ordering something with a little less hops. On the flip side, I realize that I’m in a bar, drunk, with a bunch of Legos. Things could be worse.

I open the box. It’s been close to a decade since I’ve indulged and instantly, I’m transported back to a world where my bedtime was 9 p.m. and The Simpsons was considered inappropriate television. In classic childhood fashion, I spread my haul of multicolored plastic goodness across the bar surface to get a better idea of what I’m working with. Lots of gun attachments, check. Those translucent green circular pieces that make guns look like lasers, check. Two triangular pieces that can act as wings, check. Things are looking good.

I begin constructing what I decide early on will be a Millennium Falcon-inspired ship. I notice that my method of building with Lego hasn’t changed much. I still start bottom up, making the base first and then adding onto it. Before long, I have a ship hull. Then laser blasters. Finally, I create a pilot (I had a body, but no head, so I improvised with a tiny cylindrical piece).

“What’s a guy got to do to get some Lego like you?” My eyes dart up. I am so buzzed and into my creation that I completely forget I’m in a social setting. At least 20 minutes have passed since I started building. Two guys sit down beside me at the bar. We make the promise that we can combine our Lego hauls together for the ultimate ’90s nostalgia treasure trove.

Around 11 p.m., the bar starts filling up. I notice the faces around me. They’re mostly part of the 20 to 30-year-old crowd, but there are some older couples here as well. I notice that just about everyone playing with Legos is there with someone else and, almost instantly, I regret not finding someone to bring with me on my plastic-filled adventure.

But despite my internal anxiety, everyone else seemed to be having fun. The table behind me, filled with Ryerson engineering students, showed me an “improvised crane” they made. Though it looks about as feasible a device as Donald Trump does an arbiter of U.S. foreign relations, they seemed to have had a great time building it. They tell me that their favorite part of the event is how it stops people from using their phones as much at the bar. I look around, it does seem like the majority of people are actually talking to their group.

I head back to my seat to marvel at my creation. I pause for a second, wondering if this could be the cure for a nightlife saturated by smartphones—introducing nostalgic tokens to social outings, reminding people how we interacted before. With a little help from my third beer, I’m reminded about what I think, in retrospect, drew me to Lego as a kid, being limited by your imagination, not your qualifications. I do not have a mathematically-inclined mind. I was never going to be an aerospace engineer or make high-speed submarines for the military. But with Legos, I can do all those things and more. I can create things, real or hypothetical, dangerous or benign. What’s more, Lego allows you to work with others, not against them. Can the same be said for smartphones and social media? When we aren’t swiping left, we’re constantly trying to one up each other on social media. 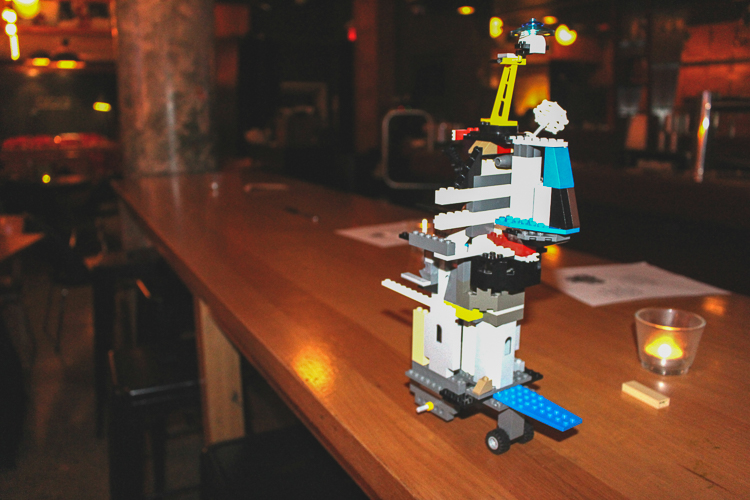 As I force the last of my third beer down, I begin thinking that more co-operative activities like ‘Lego + Lagers’ could be just what the nightlife scene needs. Let me throw something out here. Maybe people like smartphones because they make them feel connected. Maybe, we need to find ways to do this without smart technology and social media. And hey, maybe if we find ways to supplement smart technology with social interaction, people will start using less of the former. Or who knows, maybe I’m just a no-good, cereal-hating millennial who likes Lego and fancy beer.