Many Native American peoples are witnessing the tragic decline of their culture as less and less of them grow up learning the traditional language, and some of the elder storytellers are unable to share their knowledge and stories before they pass on. That’s why many Native American authors, such as Joseph Boyden and Eden Robinson, include elements of their traditional cultures in their novels – in order to keep the stories and traditions alive for future generations. Though similarly motivated, the Iñupiat of Alaska decided to take a different, more interactive route to preserve their traditional stories.

Iñupiat elders and storytellers worked together with video game designers to create Never Alone, or Kisima Innitchuna, a side-scrolling platform that depicts the adventures of Nuna, a young Iñupiat girl who is struggling to survive in the Arctic, and Fox, who helps and guides Nuna.

Though many people disparage video games as mindless entertainment with little intellectual value, the Iñupiat recognized the potential inherent in this medium. Like other forms of storytelling—books, radio, theatre, and television—video games can be considered literature, capable of conveying ideas and broadening its audience’s understanding.

Video games offer a unique approach to the transference of knowledge. Not only do they benefit from the audio-visual outputs that have made television and film such a success, they also include another attention-grabbing aspect: interactivity. The Iñupiat have taken advantage of all three of these aspects of video games to tell their story.

Though the gameplay and cut-scenes of the game are rendered in a 3-D Pixar-esque style, the introduction and “off-stage” animations are drawn in the traditional Iñupiat style. 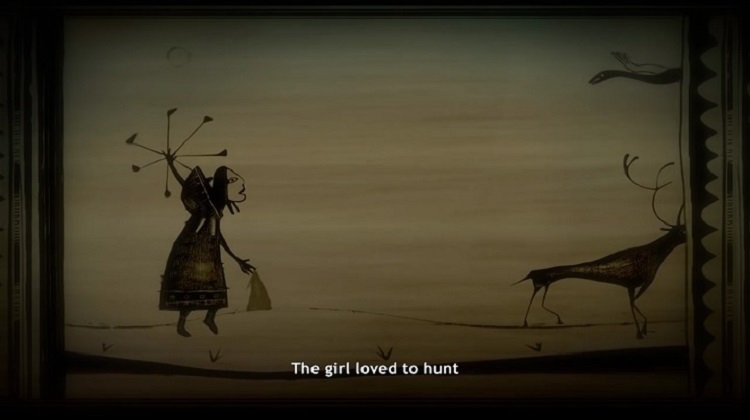 The story is narrated by an Iñupiat master storyteller in his traditional language, with English subtitles. The sound of his voice in the background constantly reminds the audience that Never Alone is not just a game, it is a story. The sound effects for the animals and the harsh Arctic wind create a chilling atmosphere so that the player can almost feel the snow crunching beneath Nuna’s boots.

Furthering the audience’s association with Nuna is the interactive element. As the player controls Nuna’s actions – they run away from the polar bear with her, and take cover from the wind with her – they feel both her desperation, and her sense of adventure.

The game includes collectable extras that unlock “Insights,” each of which explains the cultural significance of an object or idea that Nuna encounters on her adventure, such as respect for animals and nature, and the significance of drums in Iñupiat society. These Insights provide video footage of Iñupiat people explaining that aspect of their culture, providing credibility and context for the events and characters in the game.

Never Alone is considered the first of a new genre of games that records and explores small, unique cultures. In the future, as their status as a legitimate means of telling stories becomes more widely recognized, video games may become a standard method for preserving cultures.