Joe Mellen laughs from his side of our Skype call when I ask him what the sensation feels like today, “I’m not aware of the difference anymore. It was 45 years ago.” He had run into Bart Hughes then, a medical student in Ibiza in 1965 and one of the few people he had met who had actually tried acid. A lot of people were beginning to talk about the drug then, but not many had taken it. Hughes was also someone Mellen had heard of, as the man who drilled a hole in his own head—claiming a number of benefits, primarily a permanent state of enlightenment, could be achieved by increasing blood flow in the brain.

“The key moment for Hughes,” Mellen tells me, “was seeing this jazz drummer stand on his head at a party. When Newton saw an apple fall from a tree, it clicked. He realized then there was a law of gravity. Hughes asked the drummer “why did you do that?” and he responded simply, saying, “When there’s no grass to smoke I stand on my head to get high.” Hughes thought about this for a while. There’s more blood in the head when he stands that way. When we stand in the upright position, with our heads directly above our heart, the heart has to pump blood up into the head…similar to the laws of gravity.” 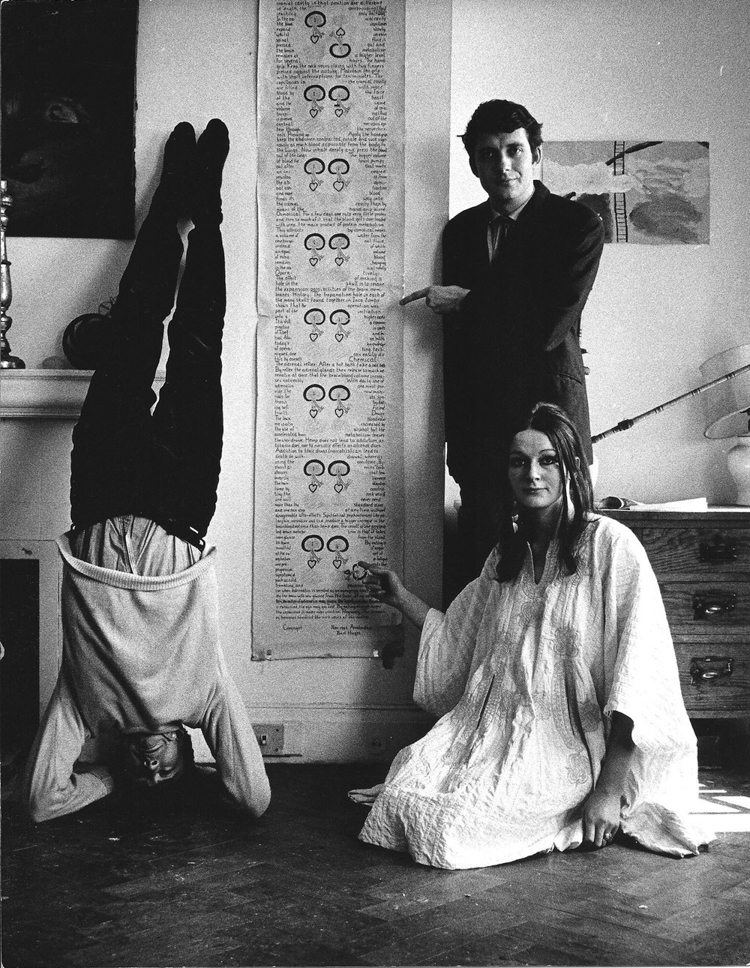 Mellen thought Hughes was nuts at first, naturally, but after learning more and more he found out pulsation in the intra-cranial arteries is suppressed by the sealing of the skull at the end of growth, the onset of adulthood. “I think at early adulthood I began to feel a bit flat,” Mellen admits. “I felt I always needed something. I used to drink quite a bit, and I smoked cigarettes too. I had a girlfriend who was always trying to turn me onto pot but I always resisted. I said I don’t get into that. But I eventually did smoke pot and when I did I thought…this is really nice. I just liked the perception it gave me, I liked particularly listening to music. And once I smoked pot I never really looked back. I just wanted to get high. The higher I got the better I felt.”

In his book, Bore Hole, which details his attempts at self-trepanation (the process of making a surgical intervention in which a hole is drilled into the human skull, exposing the tough, outermost membrane enveloping the brain and spinal cord), Mellen explains the problem we have as humans is the sealing of the skull completely once we have fully grown into adulthood. According to Mellen, it is the nostalgia for the extra energy of youth that is behind the urge to get high. He believes we get high in order to get back to that fun, youthful state we had as children before the suppression of the intra-cranial arteries when our skull is sealed-off.

“It was interesting that the feeling I had after the operation was one of increasing lightness, literally as if a weight was being lifted from my mind.” It does this a bit like a sponge, he explains. “If you constipate the water in one part of the sponge, you constrict the function of that specific part of it in order to concentrate it to another part. The same thing happens to the brain. The ego constricts the arteries in order to concentrate blood to parts of the brain it requires. But the part of the brain that dominates everything is the speech system. Speech systems include talking, writing, reading, listening, etc. It’s where you think and how we become what we are. All of our action is through speech systems and these speech systems become a tyrant, a dictator—dominating brain activity. It assumes control of our brain at the expense of other senses. Speech centers monopolize the supply of blood. They were the last to develop in our evolution, in the cerebral cortex, far away from the heart. To ensure constant blood supply to speech centers, the ego creates priority of the distribution of the speech system.”

In layman’s terms,  the reason he took a drill to his own skull was to apparently rise above his ego.  He believes that being constantly high gives him an objective view instead of a subjective one.

“A hole in the head is not a very big high,” Mellen explains, “it’s not like an LSD trip.”

In his first couple attempts at trepanation Mellen, with the help of his girlfriend at the time, Amanda Feilding, tried using a hand drill. “It was a bit like a corkscrew but with a ring of teeth at the bottom of the drill,” he laughs. “It was very difficult to get the teeth of the ring to grip into the skull, and eventually, after two or three chances I managed in the end to do it with an electric drill.”

When the operation was finally successful years later, Mellen remembers, “In the first hour I began to feel mightier, and I thought wow this is nice. And I kept feeling a little bit more and more and after three to four hours I went to bed and still woke up feeling good. It changed my state of mind forever.”

Glucose is the sole source of energy for the brain. Millen believes that consciousness is a product of brain metabolism, which is oxidation of glucose. According to Mellen, “blood volume not blood flow is the key to expanded consciousness.”

At 76, Mellen is extremely well spoken, despite having had a hole in his head for over 45 years. According to Mellen, the operation was his first step to enlightenment saying, “ you can see through the absurdity of the world.”

The Plaid Zebra does not endorse trepanation. We don’t condone attempts.