I worked in Sudan’s Nuba Mountains as a humanitarian. It was in 2011 just months before the secession of South Sudan. The scorching heat was thick with tension. What would happen to the Nuba people, who were not in favour of President Bashir and his leadership? The 2005 peace agreement wasn’t cooked to deal with them. I was there to work with protection of the people’s rights. During the week I left, an open conflict arose with indiscriminate bombing of the civilian population. Russian Antonov bombers dropped heavy bombs from their shiny metal bellies from high altitude. Already in staggering poverty, the Nuba people are now largely living in fear hiding in caves. Many have been killed. Journalists and humanitarians have had extremely limited access. Since 2011 the situation in South Sudan has been deteriorating.

The old man buried his head in his hands in resignation when we asked him what he expected from the future.

Gold Traders. An hour’s drive by dirt roads outside the main town, the dust-covered Kadugli, there’s a gold rush. The brown-red dry soil is riddled with human size wormholes, where men pop in and out of the darkness. It is a dangerous business and only few find wealth.

Gold digger looks up from his mining hole.

Witchcraft – Avoiding the mines and other explosive remnants of the war I went for my regular run up the hill, when I bumped into a procession of men and women carrying riffles and machetes. Some of the women had dead animals tied to their backs. An old lady with a dead cat hanging loose from her body distorted her face, while a younger woman tossed some liquid at the procession and me. They danced around me for a little while. Witchcraft is common around here, but rarely observed by outsiders.

The bicycle man collected water among shepherds, women and children, while I was meeting the elders of the community under the thick banyan tree in the background.

I conducted focus group discussions with the women in a small village community to better understand their needs. This young woman was sitting in the outskirts. She was suffering from mental illness.

Two young girls with dust in their hair were curious. On my journey in the Nuba Mountains it was not rare to meet people who had never met a white man before.

Kadugli town. The Nuba Mountains are beautiful. Large boulders are spread on top of the hills throughout the area. 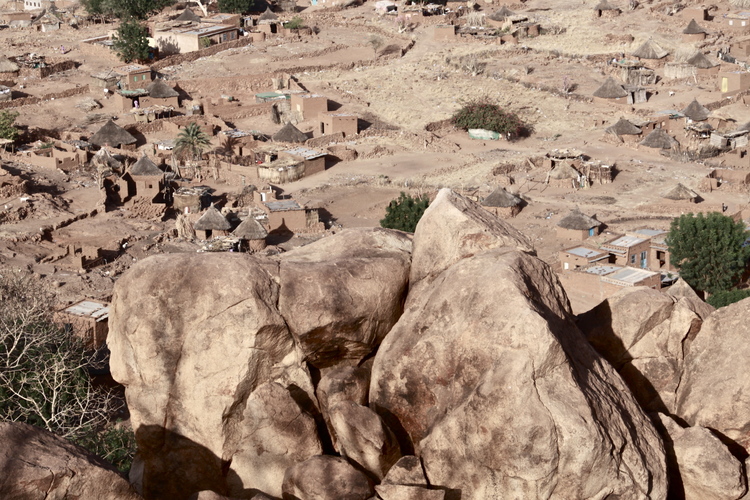