What was once a crumbling deserted building, rotting in a rural area of South Korea is now a thriving children’s centre that promotes healthy living and education while providing adolescents with a safe, creative atmosphere.

The South Korean-based company UTAA created the design after finding the building – which was abandoned by its previous owner for over two years – in the small town Gyeonggi-do, just two hours north of Seoul. Not only did they construct a useful space that would otherwise be wasted, they turned it into an architectural masterpiece.

The architects expanded on the original name of the building “Pinocchio” and devised a plan to create tiny homes within the larger home, inspired from Pinocchio being inside the whale’s stomach. Although the concept is slightly morbid, the building is now widely revered by architects and children alike.

Instead of using a basic space and plastering colourful pictures on the wall along with installing typical plastic jungle gyms, the design actually uses the structure itself through cutouts and gabled motifs to create a massive play area. The children are free to explore hidden passages and multi-leveled tiny homes to increase curiosity. 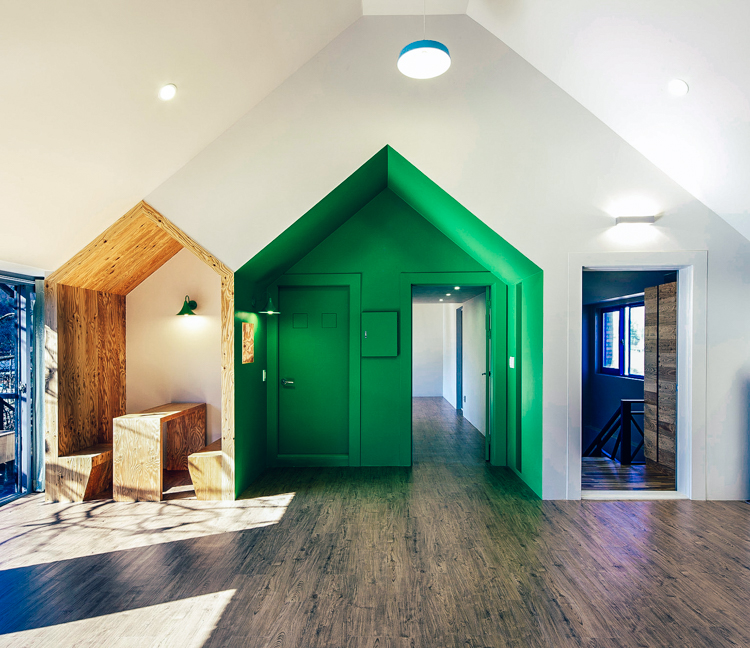 The tiny homes were constructed to match the adolescents’ height and the design “stimulates the imagination and susceptibility of children,” according to UTAA. Along with expanding their insight while exploring the hidden treasures throughout the centre, the children are exposed to quality education opportunities through the centre’s art programs, educational classes and a library also referred to as a book café.

The children’s centre that was once an eyesore with empty space is now a safe haven for kids to enjoy their youth while also receiving the opportunity to further their education. This landmark design not only displays architectural brilliance, but it also influences society’s perception of deserted outmoded resources.