A lubricant company got itself into a slippery situation earlier this month, when its sensationalist claims about its product caught the attention of some intrepid sex bloggers.

Lube-makers, I Believed After Using It, allege on their website that their product, ProLube, protects users from sexually transmitted infections (including HIV), prevents precancerous cell growth on the cervix, treats yeast infections and bacterial vaginosis, alleviates menstrual cramps, and eases vaginal dryness for 12 hours. The company promises that their product’s “unique formulation” creates “an environment in which certain virus[es] and bacteria cannot prosper.”

The company has not provided evidence for their claims, or even a list of their product’s ingredients. When concerned sex bloggers tweeted at I Believed After Using It to demand more details about the formula, the company replied, “Even I Provide your those studies [sic], it is so advance that you will not understand… Please don’t ask again.” The company’s own website admits that their product has not been put through clinical trials, and that their claims are apparently based on anecdotal evidence from customers. 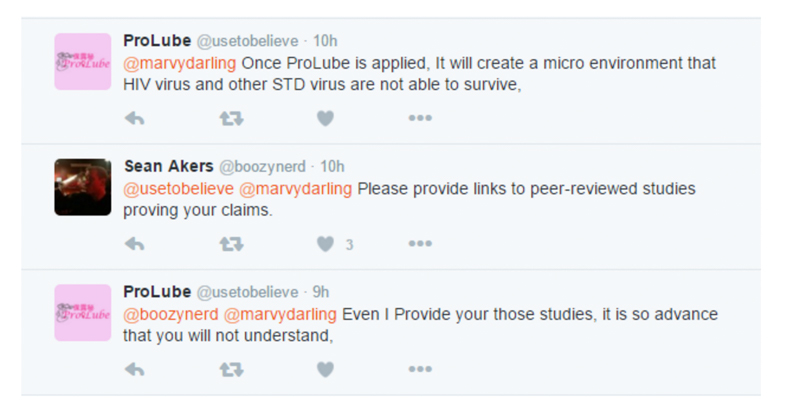 Part of what has allowed this to happen is that ProLube is sold as a cosmetic product, rather than a medical one. The FDA has fewer requirements for cosmetics than it does for drugs. However, it defines drugs as products intended to cure, treat or prevent a disease, so ProLube falls into that category even if I Believed After Using It isn’t marketing it that way.

In a blog post on her website, sexual health researcher Dr. Chelsea B. Polis urged readers to file complaints with the FDA about ProLube, in the hope that the company will be shut down when the FDA comes knocking and it can’t back up its claims.

The company’s Twitter feed has been a PR disaster throughout the evolution of this scandal. In response to consumer complaints, @UseToBelieve replied with dismissive quips including “Please believe in reality,” “You know nothing, you better shut up,” and “STFU.”

It didn’t take long for the sex blogging community to spread news of the company’s misdeeds. Sex toy reviewer Emmeline Peaches wrote a comprehensive post on the fiasco on Jan. 2. By Jan. 3., the news had reached heavy-hitter sex columnist Dan Savage, who tweeted out encouraging his followers to report the company to the FDA. Sex writer, Eva Sless decimated the lube on her blog: “The fact that this company is making these outrageous claims is worse than just irresponsible,” she wrote, “It’s deadly.”

It’s good, then, that Internet vigilantes caught the company’s wrongdoings before it began peddling its product in larger markets, where it could potentially harm more people. The FDA doesn’t have a perfect track record when it comes to lube – it initially approved spermicidal ingredient nonoxynol-9, which was later found to increase the risk of contracting STIs including HIV. But sex bloggers and sex product consumers alike are pushing for the FDA to intervene in the production of ProLube, before it can make its way to North America.