Being a night owl is not always by choice. Sure, sometimes I will find myself in a late-night Pinterest spiral, pinning pictures of cats, motivational quotes and recipes that “I’m definitely going to try tomorrow.” But more often than not, it’s just me and my thoughts, spinning loudly, resulting in another sleepless night.

Melatonin is a hormone produced by the pineal gland in the brain that controls your sleep and wake cycles. Normally, melatonin levels rise in the evening, remain high for most of the night, and then drop again in the early morning. People with sleep disorders such as insomnia or Delayed Sleep Phase Disorder, may require more melatonin than their body is producing or at different times. Melatonin is available as an over-the-counter pill and soon will be available in another form: spray.

Sprayable Sleep contains three ingredients: water, melatonin and tyrosine, which is a natural amino acid. The spray differs from the pill form of melatonin in that it will give you a more accurate dosage and deliver it gradually over time through the skin, which sends it directly into the bloodstream. It attempts to mimic how the body naturally produces and uses melatonin. 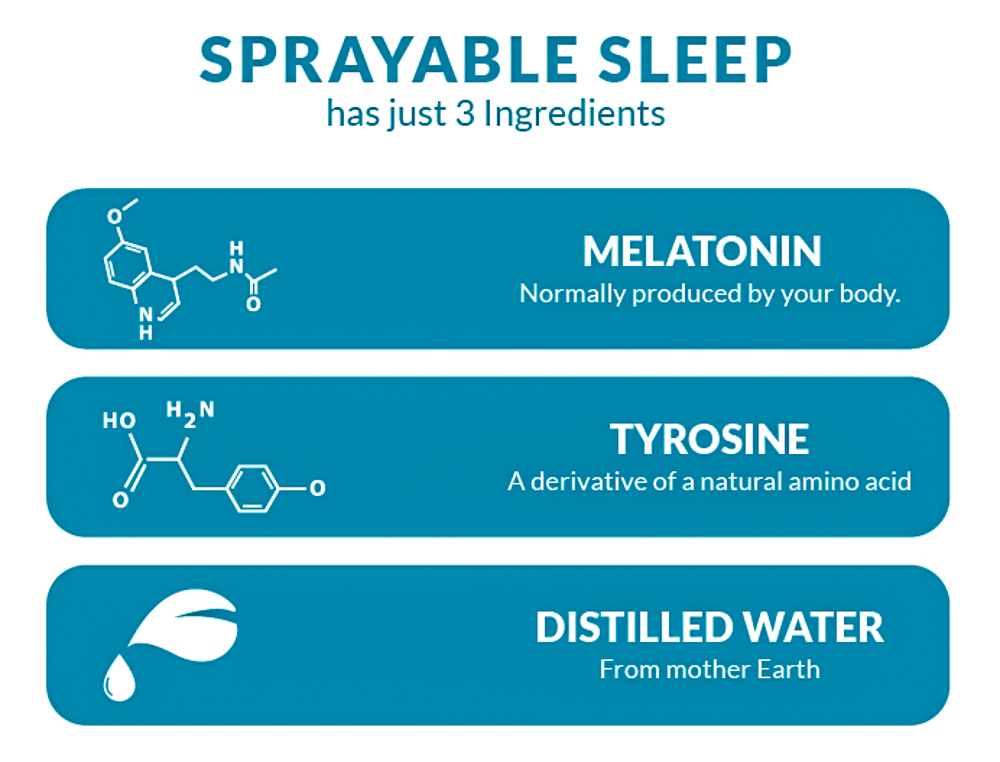 According to Daily Mail, the creators of the spray say that unlike sleeping pills, Sprayable Sleep won’t leave you feeling groggy in the morning. The spray allegedly contains 30 times less the amount of melatonin than most pills. “Those who have already tried taking melatonin in pill form might have felt as if they had hangovers the next morning,” writes Julianne Chiaet in the Daily Mail article. “For some, the extreme dosage throws their circadian-rhythm off and keeps them awake instead.”

The idea has gained a lot of popularity online. Sprayable Sleep’s Indiegogo campaign has raised over $300,000 in just a little over a month, which is more than 2,100 per cent of its original fundraising goal.

According to Mashable, one bottle has about one month worth of “promised sleep.” “Although the scientific evidence for melatonin in insomnia is generally weak, the best results have been achieved with an extended-release formulation,” says Dr. Emerson Wickwire, director of the Insomnia Program at the University of Maryland School of Medicine, in an interview with Mashable. “The keys are how much do you take, and what time do you take it?”

The spray will be available worldwide this July. Until then, counting sheep will have to do.