Microloans Could Save Tired Starving Artists. How ROSCAs Can Save Music, Art And Film.

$2400 for a Conveyer Dryer for screen-printing
+
$2000 for a film output printer with colour separation software plus a 6-pack of ink cartridges
+
$600 for micro-registration attachments for the 6-colour press
+
$150 for supplies and equipment for sticker printing
+
$80 for specially sized platen for printing custom koozies
Total Cost= $5230.00

The above items are just a few of the investments that RC Krueger needs to upgrade the equipment used for his indie record label, Villains Records. Currently, Krueger has already spent thousands to design and produce shirts, posters, CDs, and buttons for the bands on the label. And although the bands contribute their own money for supplies like blank shirts and button parts, Krueger doesn’t expect them to help with the equipment purchases, which makes it next to impossible to upgrade unless he personally receives a financial windfall.

So why not get a loan? The answer might be obvious for those who consider themselves poor artists, writers, and musicians, much like RC Krueger. First, most bank loans are for large amounts. Think ten thousands and more. That’s overkill. Consequently, we don’t want to be indebted to a bank for years. And let’s not even talk about those of us with awful or no credit. And finally, not all of us trust or understand the workings of a major financial institution.

What is a ROSCA?

There are a couple of varieties, but the simplest is the “random ROSCA.” Participants of this type promise to contribute a certain amount of money at regular intervals, say every month. Each month, a different participant, picked at random, receives the cash until everybody has had their turn. For example, if ten people contribute $100 each month, Person A gets $1,000 the first month. Then person B gets $1,000 the second month. And so on until all ten participants have received their share. In the end, everybody puts in $1,000, everybody receives $1000. In this system, early recipients in the ROSCA can be considered “borrowers,” since they have yet to pay back the $1000. Later recipients can be considered “savers” who only receive their $1,000 back once they have put in most or their entire portion. 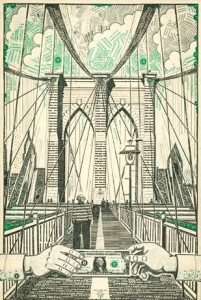 With the help of like-minded individuals, artists can borrow or save enough money to make big purchases without the help of a bank. So why haven’t more arts groups embraced the concept?

Let’s look at the people who already use and benefit from ROSCAs: close-knit immigrant and minority groups. San Francisco-based Mission Asset Fund is a non-profit that organizes ROSCAs and then reports lending and payment activity to credit bureaus. Their work helps people create or fix their credit scores, not to mention pay rent and utilities. According to MAF’s Chief Development Officer, Tara Robinson, most of their clients are low-income immigrants with difficulty accessing financial services. And eMoneyPool co-creator Francisco Cervera would not have started the business if he hadn’t learned about cundinas in his Hispanic community in Chula Vista, CA. They were so pervasive that he assumed everybody, not just their neighborhood, participated.

ROSCAs have helped these communities pay off debt, make car purchases, fund business upgrades, and more. They are a powerful, people-based way to fund our needs.

First reason: logistics. Organizing a ROSCA is daunting. Lien Vo-Tran is a first generation Vietnamese American. Ever since her hui organizer moved away, Vo-Tran has not participated, citing her aversion to taking up the responsibilities of an organizer, who must collect and distribute everybody’s portion. In addition, if a participant drops out, Vo-Tran would be responsible for making up the amount.

Second: trust. Vo-Tran, for example, would have to find participants who she trusts could regularly pay into the circle. Trust explains why many ROSCAs in immigrant and minority communities are created with close family members. However, trust may not be as huge of an issue as Vo-Tran assumes. Even with sites like eMoneyPool, where you may be grouped with strangers, dropouts are “surprisingly rare,” says Cervera.

Last reason: community. Not everybody has a built-in community to take advantage of. According to the Federal Reserve Bank of Philadelphia’s 2006 discussion paper on ROSCAs, the U.S. is now a geographically mobile nation. Americans move from neighborhood to neighborhood, and as a result, have looser social ties and community identification.

And Krueger’s reason for not starting a ROSCA? “It’s not worth it,” he says. If he organizes a ROSCA, he sees two less-than-ideal options: find a lot of people to contribute small amounts, or find a small group to contribute large amounts. Each is problematic. The first would increase the risk of less trustworthy participants. The second is financially impossible for his core group of friends.

Those who are geographically mobile can take part by using payment sites like PayPal or Google Wallet. And if an artist is still worried about trust and logistics, a site like eMoneyPool takes care of organization and guarantees payment even if a participant drops out. In our tech savvy world, community is not exclusive to the people in our neighborhoods. We can create a community right here on the Internet.

ROSCAs are a way for artists, musicians, and writers to not only invest in themselves, but to invest in their friends and future. By creating a community tied to our art instead of our geographic location, we can uplift ourselves to do bigger and greater things.