Ted Cruz is simply not one to make friends. The US Senator from Texas is widely known as the most hated man in Congress, and between old college roommates dragging out his seedy past and a room full of Republicans ignoring his speech at a party gala, the past week in New York has not been kind. But on the other side of the country, Cruz might expect a warmer welcome with the help of a Los Angeles street artist.

It’s not often that you find an artist who can proudly say they support a Republican candidate for president. In 2008, Shepard Fairey’s “Hope” poster for the Obama campaign appeared all across the country: on T-shirts, dorm room walls, street lampposts—everywhere. This year the same can be said of a tattooed image of Cruz—which the candidate himself has promoted—created by California street artist Sabo.

“People are sort of indoctrinated,” he says, when asked why more artists don’t identify as Republicans. “If you want to be a young artist, everyone tells you, ‘well then you have to believe in this and you have to think like that and you can’t think like [Republicans], and then, before you know it, everyone who knows how to paint a picture or edit a movie or write a poem is a leftist.”

Sabo has proven to be a controversial figure in the Los Angeles art scene, creating pieces that tackle abortion, drone warfare, and gay rights with a considerable shock factor and an emphasis on free speech. So when Cruz mentioned Sabo at a CNN town hall in South Carolina and began to sell his art on the campaign’s website, even he was surprised: “I am actually shocked that he even put my name on his website,” Sabo said. “I continue to be shocked when he mentions me on the campaign trail.”

“Growing up I kind of figured the right was more repressed,” Sabo remembers. “Back in the sixties and the seventies [Democrats] were the hell-raisers…after a while you find out that the whole thing was just a sham,” he says, speaking on what he considers a betrayal of the revolutionary spirit of the sixties. “I think it’s tragic that I wake up one day and, all of a sudden it’s the left with all the social justice warriors telling me what I can and can’t say.”

Sabo claims that his critics are relentless, and that internet’s ‘social justice warriors’ have made any form of open debate impossible. He points to examples like the recent YouTube video in which a black student confronted a white student at San Francisco State University over his dreadlocks, considering the hairstyle to be a form of cultural appropriation.

Controversies sparked online have had a history of making their way into the real world. Perhaps the most famous example of this real world crossover was when Minnesota dentist Walter Palmer was sent into hiding after receiving death threats and having his home vandalized for killing Cecil the Lion.

However, after Ted Cruz brought Sabo into the national spotlight, Sabo has also stirred enough controversy to have the campaign remove his merchandise from their website. Though he maintains that, “I’m not a racist, I’m an artist,” the tweets that caused the Cruz campaign to remove his art from their website include language that says otherwise.

While Sabo’s Twitter account, @unsavoryagents, is public, it appears to have been brought to the Cruz campaign’s attention only after a report from the popular YouTube channel The Young Turks (TYT).

“The only thing The Young Turks are interested in is using me as an albatross around Ted Cruz’s neck in hopes of hurting him and that’s really what this game’s about,” The LA artist says.

But it’s not hard to understand why a presidential campaign would want to distance itself from tweets like, “A black man with a gun is not a scary thing, a nigger with a gun is.” Which Sabo says was a reference to a Chris Rock joke from his 1996 routine, “Bring the Pain,” in which Rock differentiates between the two.

“What The Young Turks didn’t do is refer you to the links on those tweets that they showed you,” Sabo says, referring to one tweet that included a link to an article about a US Marine who had been assaulted in Washington DC after being asked if he thinks black lives matter by his assailants.

When asked about the TYT report, Sabo said he finds it amusing that TYT believes the way the word was spelled in his tweets ought to make a difference. At one point in the report TYT host Cenk Uygur says, “By the way [Sabo spells the word] not with an A,” and again in a follow up segment, “he spells it out as N with an ER.”

The Young Turks did not respond to a request for comment, but despite his use of the racially charged word on Twitter, Sabo insists that he doesn’t condone racism.

“To begin with, I’m a Republican and they’re going to call me a racist simply because they believe I’m a racist for being a Republican,” he says, “I grew up in the South, the word nigger is a horrific word—I don’t use it. As a matter of fact I tell people, ‘I would appreciate it if you didn’t use that word around me.”

“If I was a true racist, I’d be a Democrat,” he says, referring to the policies of the Clinton administration which he and many others, including Bernie Sanders, believe had a disproportionately negative effect on African Americans.

“What’s racist is when the [Bill] Clinton administration enacted Midnight Basketball when Republicans were trying to enact welfare reform,” he says, referring to a program meant to use sports to take inner-city kids off the street at a time when crime and unemployment rates among minorities were through the roof. “What’s racist are policies that took the black man out of the home – that replaced him with the government,” he says.

When asked if he still supports Ted Cruz after the campaign removed his art from their website, Sabo says he does. “I believe that he’s the person who’s going to protect my right to say what I want to say more than anyone else on the campaign trail,” he says, claiming that he and the candidate are still on good terms. “He’s never once thrown me under the bus.”

The Cruz campaign has remained silent on the issue and did not respond to a request for comment.

Most of Sabo’s art is critical of Democratic candidates, but when it comes to political art he believes that any politician should be fair game regardless of their party and has also attacked some of this year’s Republican dropouts.

“I think it’s kind of hypocritical for a lot of artists these days. Because after seven, going on eight, years of the Obama administration, when he was using machines to drop Hellfire missiles on wedding parties, not one damned artist who claimed to be a rebel said or did a thing about it.”

For Shepard Fairey at least, enthusiasm for the Obama administration seems to have died down. In September of 2013 when asked by TMZ whether he would replace the word HOPE at the bottom of his Obama poster he said, “I could think of a few words…how about DRONES.”

“I remember when Bush was in office they were doing Hitler – all kinds of horrific shit,” he says of artists like Robbie Conal who featured the former president and members of his administration in several critical pieces. “When their party was in power they kept their mouths shut.”

As for Trump, like the Republicans in the #NeverTrump movement, Sabo believes that the Donald is not a real Republican calling him a demagogue. Among his hand-crafted Obama toilet seats and “Free Shit” Bernie Sanders T-shirts, you can also find an image of Trump as Italian dictator Benito Mussolini with the caption, “Il Douche.” 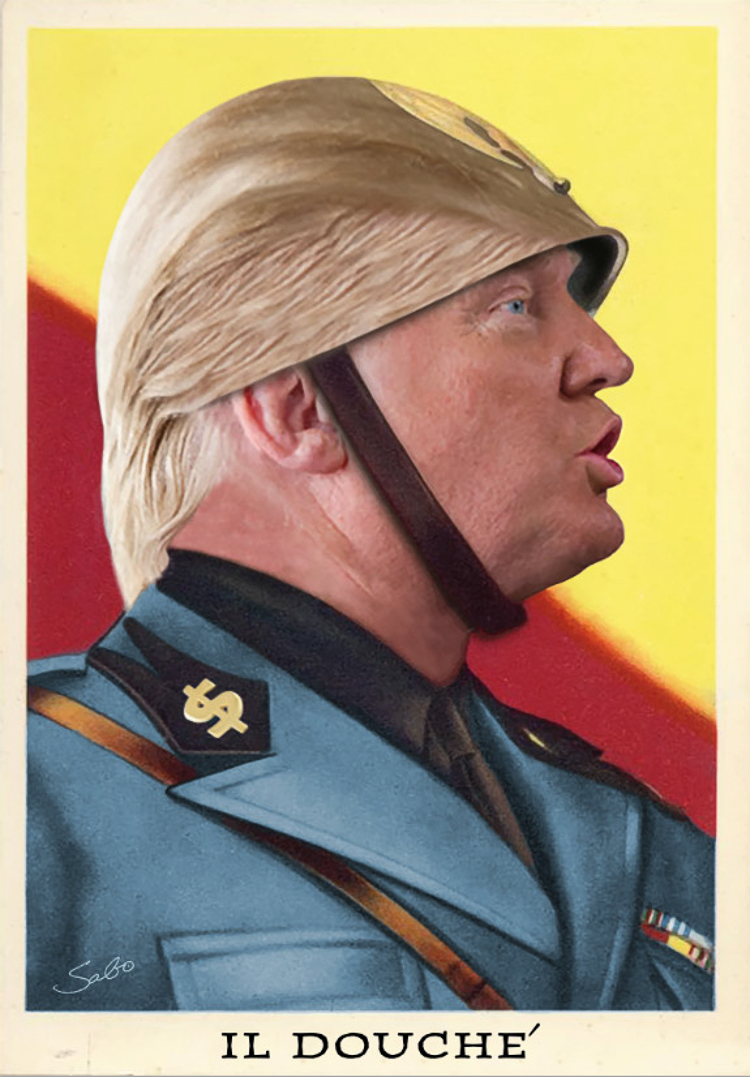 “I understand why people support him, but he’s an actor reading a script and, unfortunately, there are a lot of stupid people out there,” he says. “I can’t convince a Donald Trump supporter of the evils of Donald Trump any more than I could have convinced an Obama supporter about the evils of Obama. So you just have to let that train ride.”