There’s still a lot of value in attending college or university these days, but not in the same way it used to be. Not in terms of earning good money by landing a well-paying job, the way we’ve always been told it would. When it comes to attending college, the value now lies in experiences like developing lasting relationships with like-minded people, being able to rack the minds of professors and professionals around you and the general fun and good times you’re likely to have in your four or so years at school. But in terms of being able to land a well-paying job, and being able to make an earning from the investment of education—post-secondary school may not be the best bet anymore.

Goldman Sachs, a large investment-banking firm, has calculated that the reward of earning a college degree simply isn’t worth the cost anymore. Today, students are better off skipping university and striving to jump straight into their desired fields, instead of waiting for years in order to see the benefit of their investment. According to their report, Goldman Sachs says it will take about eight years for students who started their college degree in 2010 to begin making money from their degree. Students graduating in 2015 will have to wait about nine years just to be able to break even with the money they’ll make from their jobs after the cost of an undergraduate degree today. And that’s not even the most disturbing part. After their calculations, Goldman Sachs has projected that if the current trend continues this way, by 2030, students without some form of financial assistance won’t see the rewards of attending university until they’ve reached the age of 37. That’s over a decade of waiting to see the benefits of tens of thousands of dollars invested getting a post-secondary education. 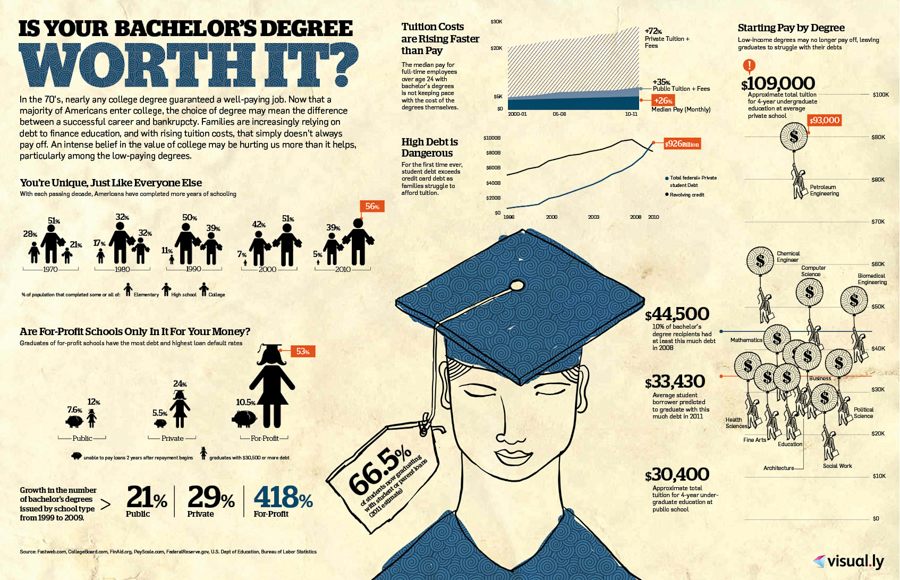 Of course, that’s not to say all post-secondary degrees have little success in landing students high-paying jobs. Most students with degrees related to business, health care and technology are more likely to see earnings right away after graduating. But students completing a degree in studies such as the arts, education, psychology and history have a high chance of seeing negative returns on their the investment of post-secondary education, according to the study done by Goldman Sachs. The rapidly climbing cost of education is a primary reason for the long wait on returns students face after graduating and it won’t be slowing down any time soon. Although post-secondary school used to be the blueprint for earning a good sum of money and securing your future with a high paying job, it’s just not the case anymore. Times are different in 2015 and it might be best to skip the process of ongoing payments and the stress of clawing your way out of debt by finding a way to use your talents and interests to reap rewards immediately, rather than wait.