In the male-dominated world of auto racing, this environmental activist has made her mark. 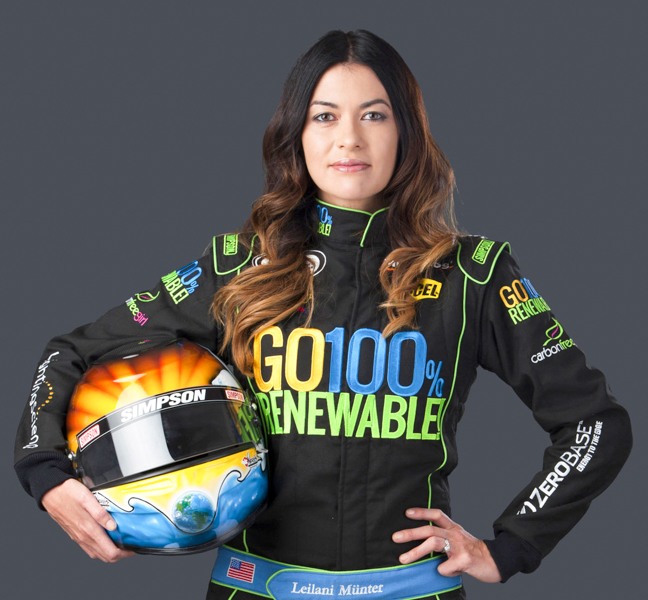 It’s difficult, I know, to reconcile the gas-guzzling, rubber-burning world of car racing with the idea of being a responsible steward of the environment; it’s almost a contradiction. But the Minnesota-born beauty Leilani Münter has managed to balance both worlds very well. To make it in the world of auto racing, you need sponsors to pay the bills and the salaries, but when Münter and her team go looking for sponsorship money, there are a few simple rules: no fossil fuel companies, no companies that test their products on animals, no companies that sell fur or leather and no companies that sell meat products.

Münter lives life in the fast lane, but armed with a degree in biology and ecology from the University of California, the 40-year-old Catherine Zeta-Jones lookalike could have embarked on a quiet career in a laboratory, decked out in a white lab coat and peering through a microscope. Destiny, however, had other plans for her, when, in 2001, she sat behind the steering wheel of a racing car for the first time. And the high-stakes, male-dominated world of racing hasn’t been quite the same since. In 2004, she finished fourth in the Texas Motor Speedway competition, setting a new world record for a female driver. And it wasn’t long before she sped her way to the Holy Grail of NASCAR racing, the Daytona International Speedway in Florida, competing alongside the likes of Danica Patrick and navigating speeds of up to 200 mph. The youngest of four girls to a Hawaiian mother and German father, she’s collecting records, awards, accolades and fighting for the other passions in her life, environmental and animal rights.

Off the track, Sports Illustrated has named her among the top female sports personalities in the world. She is the 2012 recipient of Elle Magazine’s Genius Award, and she has been featured in publications as eminent as The New York Times, USA Today, The Washington Post and Esquire.

But as successful as Münter has been on and off the racing circuit, it is her dedication and contribution to environmentalism and animal rights that have set her apart from the crowd. Against the advice of her marketing team, she has lobbied for environmental legislation on Capitol Hill and has volunteered with the National Wildlife Federation, The Solution Project, and the Oceanic Preservation Society, to name just a few of the causes she has given her time to. She has been a contributor to the Huffington Post on environmental issues. She has championed the use of zero-emissions hydrogen fuel cells, and her off-track car is a battery-powered Tesla.

And Münter doesn’t just talk the talk. A vegetarian since childhood, she has used her sport as a platform for her animal rights support. The 2009 Academy Award-winning documentary movie, The Cove, exposed the cruelty perpetrated by the Japanese whaling industry on dolphins and porpoises. She teamed up with the producers of the movie, and in a 2012 racing event in Daytona, she brought the story to racing fans everywhere.

“If you were really an environmentalist, you’d be racing a bicycle instead of a car” is a refrain Münter hears a lot. But her answer is very simple, “If I wasn’t doing what I love – racing cars – I couldn’t bring my message to the 75 million racing fans out there.” Point taken. And you can check out her own website here.

Leilani teamed up with the producers of the Academy Award-winning documentary movie, The Cove, and in a 2012 event in Daytona, she brought the story to racing fans everywhere. 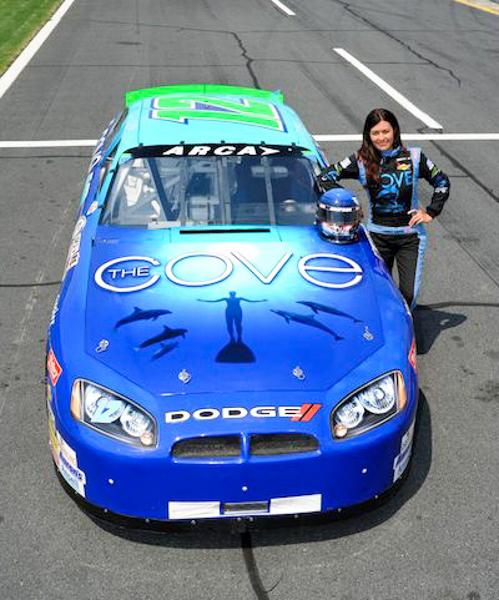 Leilani at the Holy Grail of NASCAR racing, the Daytona International Speedway, in Florida.

In her off-track life, Leilani drives a battery-powered Tesla. 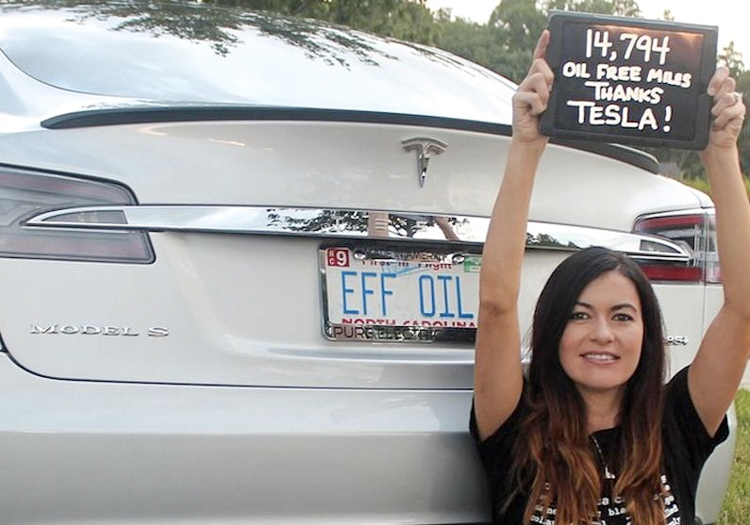