“What a time to be alive.” Words associated with the growing modernity of our age, our advancement as the human race as well as the progress we’ve accomplished—it’s also the name of Drake and Future’s newest mixtape. Today, we can see the grand achievements that technology has allowed us to undertake. Things thought impossible just a few decades ago such as robotic limbs, biometrics and Rob Ford have now become a reality. However, there is sometimes still a need to go back to the roots from which society is based on.

Previously the co-founders of the now Microsoft-owned telecommunications application Skype, Janus Friis and Ahti Heinla created the startup Starship Technologies to advance the delivery of local goods and grocery services. Instead of delivering merchandise by air, much like Amazon’s planned Prime Air delivery system which delivers packages by drone carrier, Friis and Heinla decided to deliver stuff the good ol’ fashioned way—by traversing the sidewalk. Instead of employing humans to do so, they have another delivery method in mind.

Their idea: introduce an entire armada of autonomous, self-controlling delivery robots to the streets.

“Our vision revolves around three zeroes—zero cost, zero waiting time and zero environmental impact,” said Heinla in the company’s press release. “We want to do to local deliveries what Skype did to telecommunications.”

The small 6-wheeled robots can carry an equivalent of two grocery bags per delivery, and are conceptualized to transport loads to the receiver in a 30-minute time frame. The electric powered rover can roll at an average of about 6 km/h and will be able to drive themselves in a 5 km radius, as well as carry a front facing sensor that will allow them to sense obstacles in their way. Starship Technologies says that the robots will be able to operate autonomously 99 per cent of the time, meaning that even though the machine can function on its own, a human will be looking over the bot if it ever gets lost or confused.

Starship Technology expects that this invention would allow them to lower the cost of local delivery by “10-15 times per shipment.” 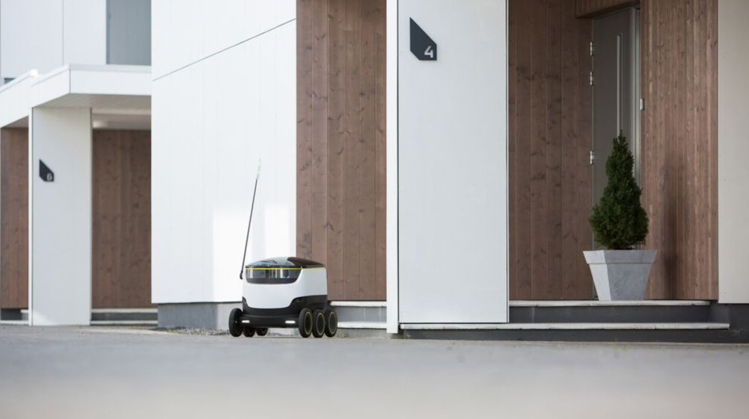 “With e-commerce continuing to grow, consumers expect to have more convenient options for delivery—but at a cost that suits them,” continued Heinla. “The last few miles often amounts to the majority of the total delivery cost.”

Parcels would be delivered to Starship hubs that would be set up around a city or area, with the bots picking the items straight from the hubs and delivering them to the eagerly waiting customers. Any of the packages being carried would be sealed inside of the robot until the completion of its delivery, where the recipient would use an app on their phone to open it. There would however be a need for the bots to be operating from multiple hubs due to both their leisurely speed and finite range.

Previous iterations of the idea have been conceived, such as Kobi Shikar’s concept of the Transwheel and Aethon’s TUG mobile delivery robot, which is primarily used for logistical delivery of items within an organization.

Starship Technologies plans to launch its first pilot services for the bot in 2016.

“Our robots are purposely designed using the technologies made affordable by mobile phones and tablets—it’s fit for purpose, and allows for the cost savings to be passed on to the customer,” said Heinla in the release.