How to spot the difference between a tourist and a traveller

It’s very easy to spot the differences between a tourist and a traveller. A tourist stands out; fanny pack, I heart NY T-shirt, head buried in a map or admiring the view through the lens of a smartphone. Tourists take pictures of absolutely everything they see, because they never want to forget.

Travellers never forget; they blend into their surrounding so seamlessly that you would think they were one of the locals. Maps aren’t needed because getting lost, and finding your own way is half the fun. Travellers don’t need 1,000 pictures on their iPhones because they have the memories in their mind. They soak in the culture, ask questions, try new things, make new friends, adopt new outlooks, and look at everything as a new, exciting discovery, instead of as an Instagram opportunity.

I love being a tourist. I will openly admit that I have that I heart NY tee, I’ve taken a selfie in front of Cloudgate – or as I call it, the giant bean – in Chicago, and I’ve been to the lookout level of every famous structure, in every city I’ve been to. But I also love being a traveller – and have to admit that it has a much bigger payoff. There is nothing more rewarding than slowly wandering through an unfamiliar place without a map or timeframe, and stumbling across something amazing in serendipitous fashion. It feels like a secret that only you know about.

Whether you consider yourself a tourist or a traveller, there are major differences, and they are further outlined in the following infographic: 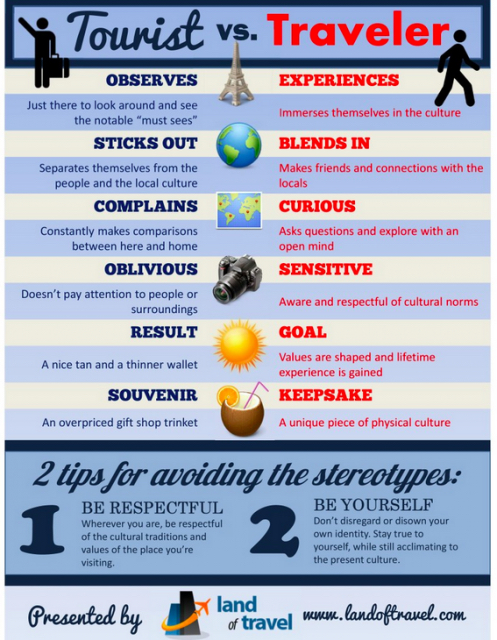