How supermarkets trick us into buying more than we really need

Gone is the day when a grocery store was a place where you’d just go to pick up your weekly groceries. Times have changed, and today’s supermarkets use every trick in the book to get you separated from your hard-earned cash. Behavioral psychology, marketing science, neuroscience and biometrics are now as important a part of business strategy as those crisp veggies that grab your attention or the aroma of freshly-baked bread.

When it comes to how most of us buy our groceries, at least in North America, the supermarket has all but replaced the friendly mom-and-pop corner store and your local butcher shop and bakery. More and more of these outlets have added ancillary services to their aisles and aisles of shopping convenience – it’s now commonplace to find a florist, a bakery, a sushi counter and a drug store inside the supermarket. Many even have an area where you can sit down and have a meal. And added to this is the increasingly obvious fact that this supermarket chain has bought up that supermarket chain, or these two giants have merged to form a super-giant. Maybe “supermarket” is no longer the term to use – “megamarket” may be more appropriate. At any rate, these behemoths of the food industry have become very, very good at getting you to buy more stuff than you probably need, or worse yet, to buy stuff that you don’t need at all. They’re using science to get their way, and here’s how.

Most of us are creatures of habit. Next time you’re in one of those large grocery chain stores, note the direction that most of the shoppers are walking. It’s probably counter-clockwise. Why? Who knows? It’s just the way most of us are wired; it’s probably the same reason why most running tracks also go counter-clockwise. The big grocery chains know this, and that’s why the main entrance is usually (but not always) on the right-hand side of the store – right away the shoppers are subconsciously drawn into a comfortable counter-clockwise walk, and that just feels “right.” Even if the main entrance is on the left, or in the centre, you’ll still be drawn into a counter-clockwise walk. You’ll also notice that more often than not, the first thing you’ll see as you enter the supermarket is the fresh produce department. And those shelves and displays full of lettuce, tomatoes, apples and blueberries will immediately put you in a good mood; I mean, who wouldn’t feel perky in a sea of bright and fresh looking greens, yellows, reds and blues. So, between that comfortable counter-clockwise walk and being surrounded by all those shelves and counters of fresh-looking fruits and veggies that are designed to make us feel good, there’s a better than average chance you’ll spend a little more time in the store. And more time spent in the store means more money spent in the store.

Staying with the fresh produce for a moment, you’ll notice that colour is used to get your attention. The marketers know that our eyes are naturally drawn to a potpourri of colour, so you’ll seldom see all the green produce – lettuce, cabbage, kale, cucumbers and broccoli – all together. The colours will be well mixed, so you’ll see some bright yellow peppers, rosy-red tomatoes and purple eggplants scattered among all the greens. The same, of course, goes for fruits; you’ll be more inclined to buy strawberries if they’re sitting next to the blueberries than if they were sitting next to the raspberries. Mixing up the colours like this subconsciously grabs our attention and increases the chances that we’ll hang around just a little longer and, you guessed it, spend a little more money.

Mixing up the reds, yellows and greens in the fresh produce area is purposefully designed to get your attention and spend more money. 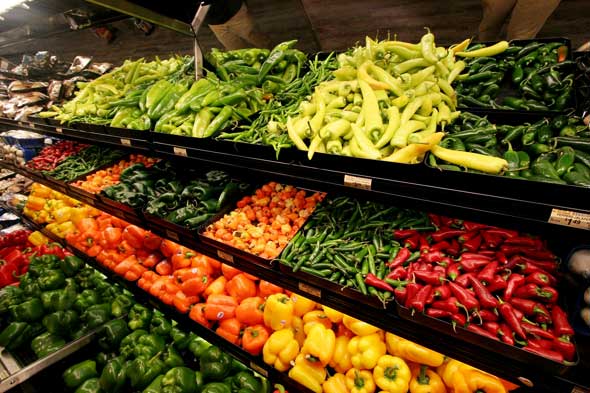 So, if you go to the store to pick up some dairy, cold cuts, bread, cheese and your favourite giant-sized bag of nachos, there’s a good chance that you’ve already put a few goodies from the produce department into your shopping cart – a few goodies that you had no intention of picking up at all. And speaking of shopping carts, you may have noticed that they’ve gotten quite a bit bigger over the years. In his book Brandwashed, marketing guru Martin Lindstrom noted that when stores doubled the size of their carts, shoppers on average bought 19 percent more stuff. Anyway, getting back to your shopping list, you’ll see that those staples of dairy, bread and meat – the things that many of us go to the market for in the first place – are usually tucked away in the back of the store, forcing us to walk past all kinds of products that we had no intention of buying. And guess what’s also tucked away in the back…the public washrooms. So, if you have to heed the call of nature, you’ll have to walk past aisles and aisles of more temptation.

And now that you’re in a store-designed good mood, feeling just a little carefree as you meander around the counter-clockwise circuit and maybe taking a nibble from one of those imported strawberries that you had no intention of buying in the first place, there’s a whole host of tricks that the merchandisers still have up their collective sleeves, all concocted to get your attention and leave your wallet just a little thinner. To get your undivided attention (even for half a second, because that’s all it takes) price tags and “specials” tags are frequently brightly coloured – shades of red and yellow are favourites. Props like fresh flowers in the produce department and bottles of wine scattered haphazardly throughout the cheese section will appeal to that part of your brain that says “spend, spend, spend.” But I’m saving the black-belt tricks for last.

The decoy is a tried-and-true device that puts money in the supermarkets’ bank accounts every time, and this is how it works. There are two very similar products, Brand ‘A’ and Brand ‘B’ (olive oil, for example), and they are placed side by side on the same shelf. Brand ‘A’ olive oil is the product that the store is trying to sell more of (maybe the store got a great deal from its own supplier and there’s a better-than-normal profit margin for the store), and they do this by posting an artificially higher price sticker on Brand ‘B’. Suddenly, Brand ‘A’ looks very attractive to the shopper, and who can resist a bargain, right? Brand ‘A’ flies off the shelf and Brand ‘B’ – the decoy – looks like a loser. But there are no prizes for guessing who the real loser is.

The decoy is a tried-and-true device that puts money in the supermarkets’ bank accounts every time. 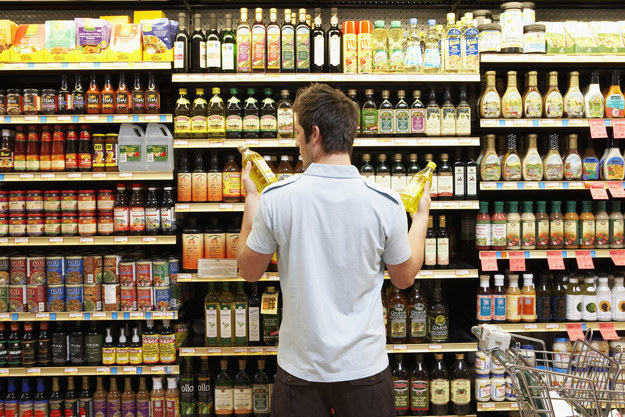 Next, there’s what’s referred to as “end of aisle placement,” sometimes known as “end caps.” The supermarkets know that we don’t go up and down every aisle in the store, but an eye-catching arrangement at the end of, or entrance to, an aisle will demand your attention. These products seldom have anything in common with the rest of the products in the aisle and are frequently near their expiry dates. And if they’re not near their expiry dates, then there’s the illusion that somehow these end-of-aisle products are on sale; the fact is that the end of an aisle is prime real estate, and the companies that actually make those products frequently pay the supermarkets big bucks to have their products placed there to begin with. But worst of all is the fact that because these end-of-aisle products sell significantly more than if the same product were on a “regular” shelf, the prices are often artificially jacked up.

Don’t get lured into the “end-of-aisle” traps.

Whether a particular product is placed at eye level, high up or low down on the shelf is the next trick that supermarkets have learned. We are inherently lazy shoppers, and once again the supermarkets know this. If there are three brands of breakfast cereal stacked up vertically, nine times out of ten our eyes will be attracted to the brand that’s at eye level. And because we’re lazy, we just grab that one, and that’s exactly what the supermarkets expect us to do. A quick look up or down will often get you an equally good product, and often at a better price. And if you have kids with you, their eyes will land on the lower levels, where the goodies that are known to get their attention lie.

And there’s a whole lot more in their bag of tricks. Free samples are a ploy that the big chains use to either promote a new product or get rid of older products that weren’t selling at all. The intent here is to make you feel guilty for not buying that box of cookies or jar of jam. By all means, grab a free sample (or two or three if you can); just don’t make eye contact, grab your freebie and move on. As you walk around the store, the background music is often slow, making you more likely to walk around at a slower pace. And then there’s the check-out counter – maybe the biggest trap of all. Don’t get tempted into the infamous “impulse purchase” trap. When you’re waiting in line at the checkout, leave the candy bars and magazines behind. 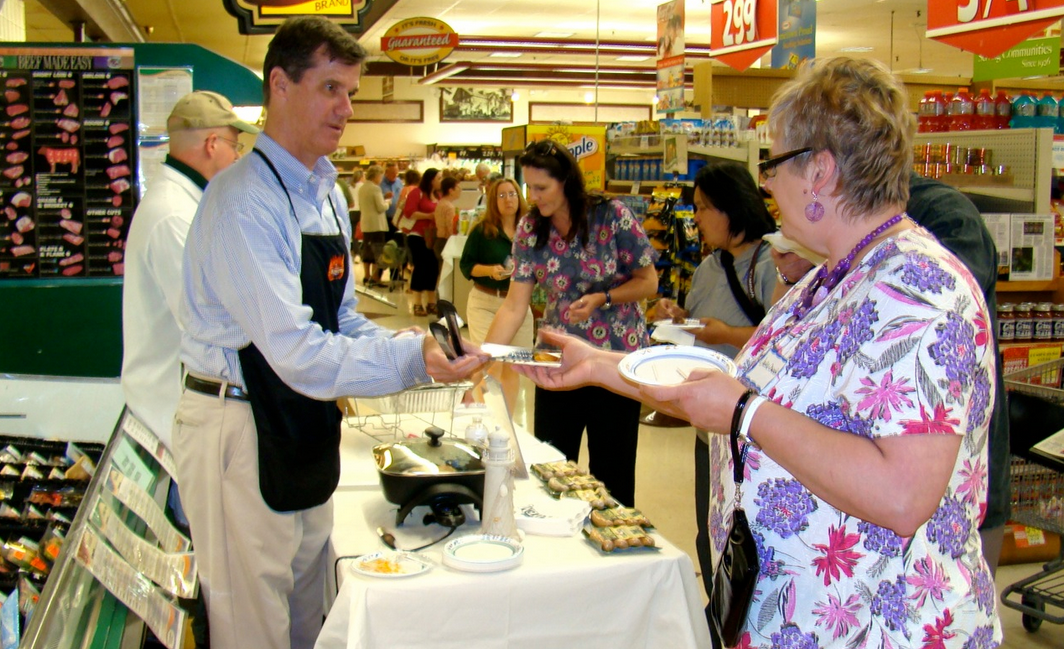 Don’t get tempted into the famous “impulse purchase” trap. When you’re waiting in line at the checkout, leave the candy bars and magazines behind. 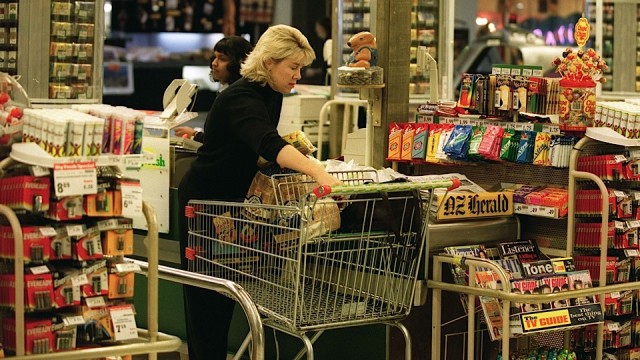 So, next time you’re planning a quick trip to the supermarket, or even if you’re doing some serious weekly shopping, here’s a few tricks of your own that you should consider:

1. Make a list of what you need and try to stick to it.
2. To minimize going astray, stick your ear buds in to avoid the store’s distractions.
3. Before you buy your usual cereal or can of tuna, check around for a different and cheaper brand.
4. Be the contrarian and walk around the store in a clockwise fashion.
5. Don’t fall for well-lit and well-placed “specials”. There’s usually nothing special about them at all.
6. Unless you have a lot of stuff to buy, use a carry basket instead of a buggy.
7. Don’t fall for the “free samples” trap.
8. When you see a sign that says 2 for $4, you can still usually buy one for $2.
9. Avoid those last minute temptations at the checkout counter.
10. Never, ever, ever go grocery shopping when you’re hungry.