How cats came to conquer the world

Who doesn’t like cats? They seem to embody everything we like about ourselves in a smaller, cuddlier form. They have personalities of their own; they can be affectionate, standoffish, shy, gregarious, aloof, or just plain absurd – sometimes all in the same hour. Cats and dogs have vied for our affection for centuries, their popularity waxing and waning with different cultural trends and historical events. It’s hard to say which one is the “better” of the two, but let’s just leave the debate at this – have dogs ever had a Broadway musical dedicated to themselves?

For thousands of years, however, we kept cats around for convenience rather than for companionship. For the bulk of human history, we’ve stored food in grain silos and barns – prime breeding grounds for colonies of mice and rats. Cats, both wild and domestic, gobbled these little rodents, keeping their population under control and our grain stores safe. Early European farmers probably brought them into Europe from the Middle East some 6,400 years ago; that’s the oldest known cat skeleton we’ve found. Approximately 1,500 years ago, another wave of cats arrived overseas from Egypt, and they joined, interbred with, and supplanted the first wave of cats. Ever since then, we’ve been stuck with the little mousers.

In some ways, the relationship we have with cats mirrors our domestication of the dog – some fifteen thousand years ago, a group of intrepid wolves realized it was easier to scavenge from midden piles than to run down caribou in the woods. Humans took a liking to the canines, and before long a rigorous campaign of eugenics and selective husbandry ensured that their descendants would stick with us. But unlike dogs, we don’t have very much to go on regarding the earliest history of the cat and its domestication. Or rather, we didn’t… until now.

Molecular biologists Eva-Maria Geigl and Thierry Grange of the Institute Jacques Monod in Paris collected and compared mitochondrial DNA from 352 ancient cats and 28 modern wildcats, a sample spread across 9000 years and three different continents. Scientists use variations of mitochondrial DNA called mitotypes, to track maternal lineages. These mitotypes have led us back to the Middle East and to a close cousin of the modern housecat.

Just as dogs are the stunted cousins of wild wolves, modern housecats can trace their kitty lineage ten thousand years back to the African wildcat. Taller and more bandy-legged than your average housecat, these intrepid cats are adapted for hunting in arid uplands – including dunes, kopjes, and dry grass. It’s not hard to surmise that ancient African and Middle Eastern wanderers found a kindred spirit in the social cats and adopted them into their “families.” In addition to dealing with household pests like rats, mice, and bugs, it’s likely that these early cats also tackled nastier problems like snakes or scorpions – ancient Egyptian paintings frequently depict household kitties battling cobras and other desert-dwelling threats. 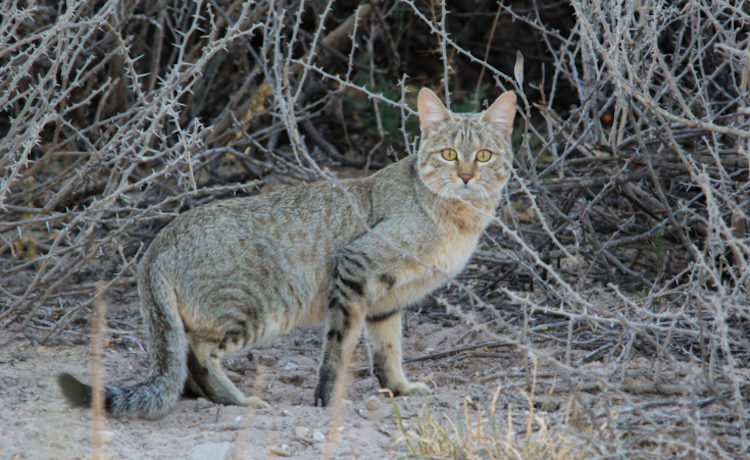 Domestic African cats, the second wave of cats, possess a common mitotype scientists have dubbed IV-C. That Egyptian cat signature bounced from continent to continent over several millennia. By 800 BCE, IV-C cats arrived in the Middle East and Europe, and had entirely colonized those same regions by 1300 CE. By that point, seven of nine European cats analyzed possessed the IV-C mitotype, some as far flung as Viking country in Scandinavia and Denmark. As cats are territorial and not disposed to long migrations, it’s logical to assume that humans brought their kitties with them on long voyages, guarding stocks of food in a ship’s hold from any marauding rodents. From there, it was only a matter of time until cats reached the New World with their owners in the 1600s, after hundreds of years of selective breeding and other population pressures.

Nowadays, the cat genome has split into a dense and diverse family tree, and few of these many breeds resemble their distant ancestors. British shorthairs, Himalayans, and Maine coons are just some of them, but years of selective breeding, one-off deformations, and a bit of incest have produced fascinating mutant breeds such as Japanese bobtails, and, of course, those pink, wrinkly, saggy, scrotum-like sphynx cats. But really, as the Internet can attest, they’re all pretty cute.