Hitchhiking movies that will motivate you to hit the road

Just like many stories about hitchhiking, movies about hitchhiking often focus on the negative. The Hitcher comes to mind immediately. That scene in Pee Wee’s Big Adventure when Large Marge’s face explodes makes an impression. Perhaps worst of all is George Carlin teaching Jay and Silent Bob about the “rules of the unwritten book of the road.” These movie moments all highlight the deadly, scary, or humiliating possibilities of getting into a car with a stranger. This is a list of movies that show the life changing possibilities of hitchhiking. They might even inspire you to travel by thumb. 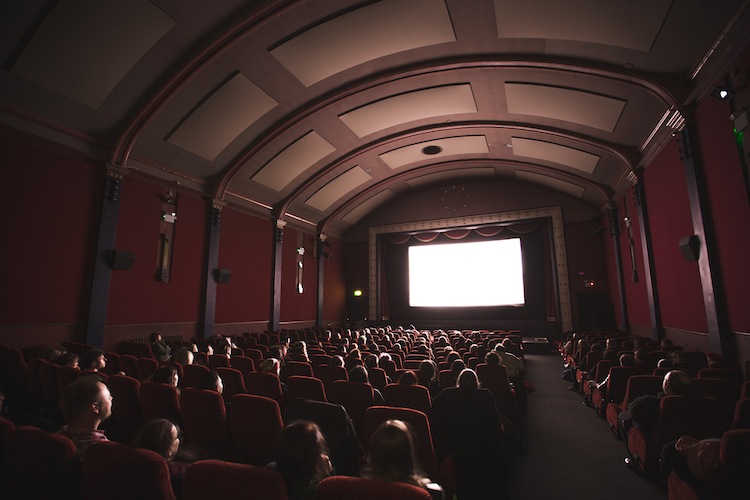 This is a beautiful film about a random group of travelers in Bhutan, all on the road for different reasons. Dundop is trying to get from the village where he is stationed as some sort of government official to the city to take advantage of an opportunity to get to America. He only has two days to make the trip. When he misses the bus, hitchhiking is his only option.

Dundop is quickly joined by an elderly farmer trying to get his harvest of apples to the market. He is annoyed because no one has room for both of them. He moves up the road to a new spot only to be joined by a young monk also looking for a ride. The increasingly impatient Dundop is irritated by the monk. To pass the time and calm him down, the monk begins telling a story.

The story he tells is unrelated to hitchhiking but is a magical tale about being lost on your search for something else. The film jumps back and forth between the monk’s telling of the story and the travelers’ slow journey catching rides.

Along the way, Dundop, the farmer, and the monk are joined by a man and his daughter, makers of rice paper on their way to sell their product in town. Dundop becomes interested in the daughter and starts to question whether he’s in a hurry to get to America, after all.

This film is about striving to advance, yearning for movement and newness, but being trapped by a slow pace. Hitchhiking, which can take a lot of patience, is a great vehicle for the message. The interrelationships that develop among the travelers are touching, and the scenery along their journey is beautiful.

Kamen is an art student hitchhiking across Bulgaria to attend his friend’s funeral. On the way, he meets Avé, a teenager who is on her way to see her ill grandmother. When they share a ride Avé tells their lift a different story and even tells lies that include Kamen.

While Kamen is disturbed and concerned by Avé’s dishonesty as they travel together across the country, he’s oddly drawn to her. The conflicting nature of their personalities makes for an interesting character study.

The film has seven out of ten stars on imdb. One critic says the hitchhiking story, “works very well to bring the couple in a variety of situations and in contact with all sorts of people.” It was nominated for the Critics’ Week Grand Prize at the Cannes Film Festival in 2011. 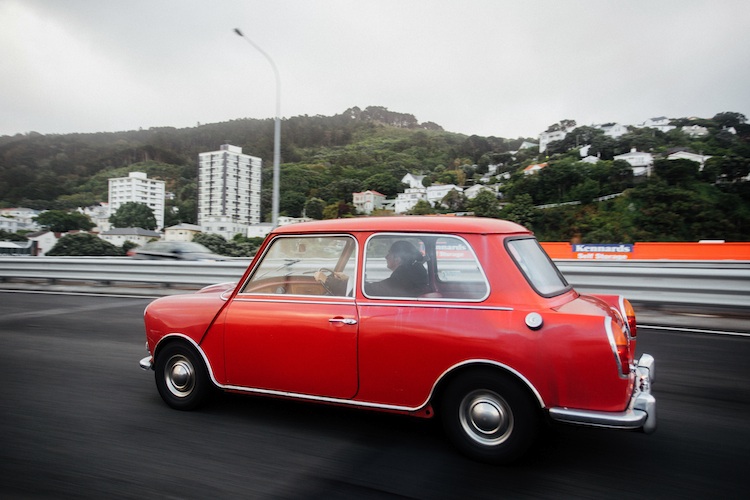 There’s more to Living is Easy With Eyes Closed than hitchhiking but it does set up a great story about three strangers on the road. Antonio is a lonely teacher in Spain who uses Beatles lyrics to teach his students English. When he finds out that John Lennon is in Spain shooting a movie he decides to drive cross county to the set to try to meet him.

Along the way, he meets Belen, a young pregnant woman who has run away from home. She’s hitchhiking to nowhere in particular when Antonio picks her up. Further along they meet Juanjo, a boy who left home to escape his overbearing father.

Antonio is an extremely beneficent lift for the two young people. Not only does he offer them rides without exactly being asked, but he also does his best to help get them on the road to a better future. The three of them bond through their shared expedition and have some truly emotional moments.

Hitchhiking takes a back seat to the drama that plays out, but this movie makes the list anyway. It’s a solid film, and none of the lessons and insights would have happened had the young runaways not gone to the road with their thumbs up.

The Forest Prince and the Pig Man 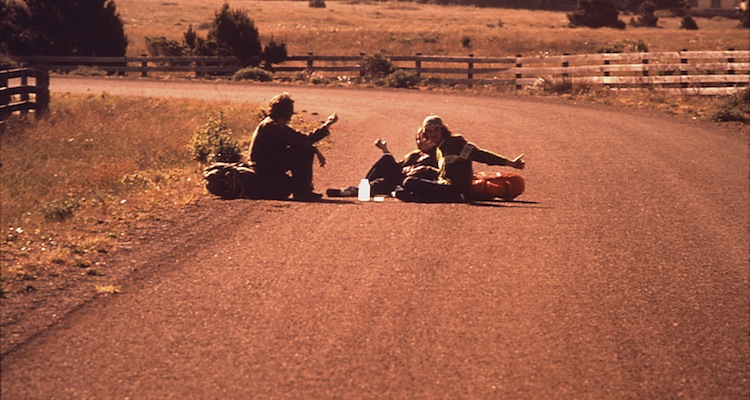 Billy Jack’s trip gives a cross section of the country and the intrepid souls who travel by thumb. He meets “teenage thrillseekers, a cop blasting ABBA, an acclaimed sculptor and a wayward Oscar winner.”

Even Cowgirls Get the Blues 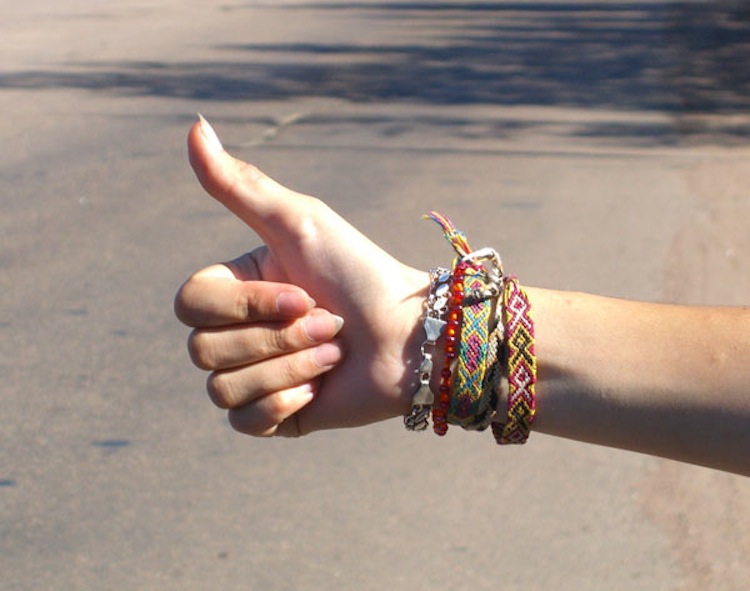 Sissy Hankshaw must be the most committed and accomplished hitchhiking character ever imagined. Born with grotesquely oversized thumbs, hitchhiking is her destiny. If she doesn’t catch a ride at least once a day her thumbs begin to ache. When she’s on the road she is “in a state of grace.”

Even Cowgirls Get the Blues is based on the spectacular novel of the same name by Tom Robbins. It follows Sissy from discovering the magic of thumbing for rides as a young girl to finding her way to the Rubber Rose Ranch where a group of self-styled cowgirls is on a mission to bring down the patriarchy.

While the film can’t compete with the novel, it’s a fun movie. Gus Van Sant directs and Uma Thurman, John Hurt, and Pat Morita star. It even has a bit of Keanu Reeves and the debut performance of Rain Phoenix, the younger sister of River and Joaquin. The scenes of Sissy commanding cars to pull over with the intricate dance of her thumbs makes it well worth a watch.