Graphic Content and The Moral Gap In Western Journalism

The Radio Television Digital News Association (RTDNA) says news subjects should be treated with “respect and dignity”; however, graphic content has journalists struggling with this task, particularly when covering stories abroad.

Journalists, already facing possible scrutiny when publishing graphic content, are being accused of unfairly publishing disturbing videos, images and audio recordings in crises occurring outside of the Western world.

Reporters are urged by the RTDNA to only use graphic content when it contributes to the understanding of a story, regardless of location, writing, “Powerful pictures can help explain stories better or they can distort the truth by blurring the important content of the report.”

Some stakeholders, journalists and critics believe graphic content isn’t needed to explain stories better, viewing it as “sensational.” Others go further with their critique, saying this sensationalism applies especially to stories of non-westerners, where disturbing content is overused and fails to show “compassion to victims of crime or tragedy.”

Since the 2010 Haitian Earthquake, the publication of graphic content has become a hot topic. Valerie Payen-Jean Baptiste, a survivor of the disaster, spoke to the American Journalism Review on the footage taken by journalists.

“My critique is about the tone of unnecessary pictures and videos that show pieces of bodies, dying people, the nudity of people, of the misery/tragedy of people in line for food and water. Seriously, is this cruelty really necessary to mobilize massive humanitarian action?” Baptiste said.

The earthquake killed 230,000, injured three million and caused over $14 billion in damages. Many of the videos and images captured bloody bodies sprawled over Port-au-Prince streets crushed under the rubble of tumbled buildings.

Seattle Times guest columnist Manoucheka Celeste also says this is a problem greatly applying to the Third World, believing the coverage of the Haitian earthquake turned “ridiculous.” Celeste said she hoped the event would destroy stereotypes towards the Third World; she says the coverage instead associated Haiti with “helplessness, danger, poverty and hopelessness.”

Criticism about the earthquake coverage caused some news organizations to reconsider their boundaries on the use of graphic content, but other sources were resilient.

Michele McNally, assistant managing editor of photography at The New York Times, sent five photographers to the natural disaster, defending the disturbing images her publication used by saying, “(The photographers) wanted the world to see, to know how horrible it was.”

More recently, many news publications and even politicians have supported McNally’s views. After the Sept. 2013 Syrian gas attacks, a US congressional panel published grotesque videos of Syrian civilians vomiting and convulsing from nerve gas. The footage was used by CNN. US Secretary of State John Kerry defended the content’s publication, saying it makes sure “everybody understands what is at stake.” 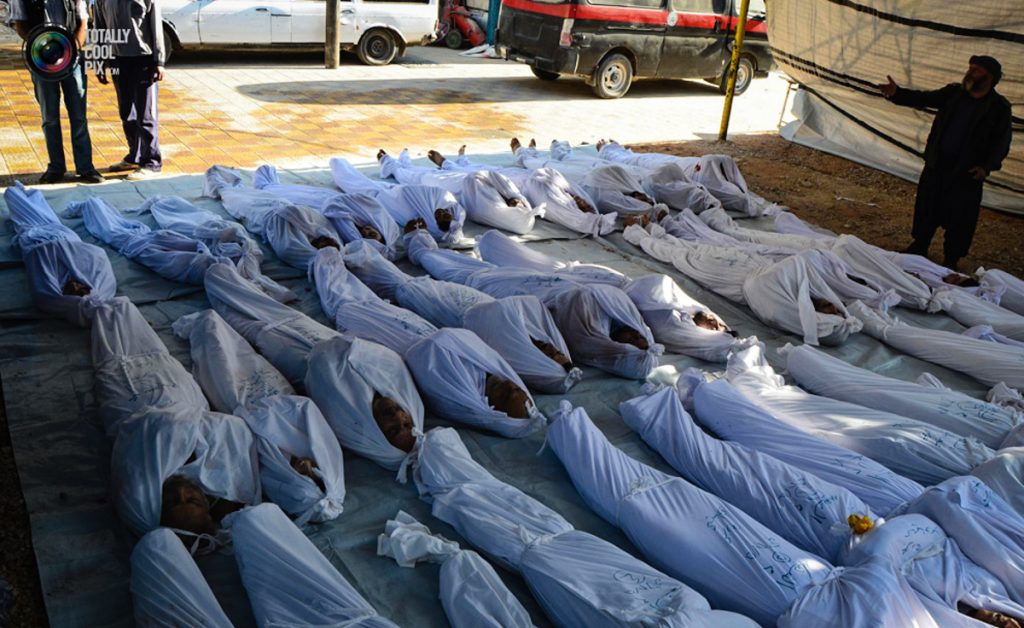 However, it’s questionable if footage of an American would be given the same support.

Andrew Alexander, an omsbudsman at The Washington Post, questioned the use of graphic content in articles, asking if location influences a photo editor’s decision to publicize disturbing footage. He presented this idea in February 2010 on Talk of the Nation, a radio show held on the National Public Radio website.

Alexander cited Hurricane Katrina as an example where graphic content was scarce. He says the Post did not publish, to his knowledge, many pictures or videos of bodies from Katrina.

“That may be because in this country and in many nations, authorities are quick to cordon off areas and it’s more difficult to see things,” Alexander said.

Social change website Do Something says 1,836 died in Hurricane Katrina although the number is deemed controversial due to the amount of missing persons and unidentified bodies.

The Post said it would publish graphic content regardless of location. Realistically, journalists looking for photos of Katrina’s aftermath were faced with barriers implemented by the federal government.

United States Army Lt. Gen. Russel Honoré oversaw the relief efforts, having a member of his staff state, “We don’t have any legal recourse to do any kind of law enforcement or anything like that in our role. So the only thing we can do is control who goes with us.”

Photos and videos still found their way into the news, but the coverage of Katrina victims was miniscule compared to Haiti’s and was rarely on the front page, Alexander says.

Stephanie Walsh Matthews – the Ryerson Program Director for the Department of Languages, Literatures and Cultures – says this “censored” coverage of disasters in the western world is problematic. Matthews says it distances us from non-western citizens culturally and distorts our perspective of them.

“There’s a barrier between the West and the Third World,” says Matthews. “When we display so many horrors in the Third World and not at home, it creates a stereotype that these places are falling apart, leaving us as role models. There’s a de-familiarization going on.”

A photo of Jusko accompanied the article—dead on his back, a pool of blood streaming off the sidewalk he laid on. The photo has been taken down after Nolan received hate mail from readers and a request from Jusko’s family for its removal.

Nolan responded to critics, saying he used the photo because it was exclusive and belonged in the story.

“The fact that the photo was unpleasant and graphic does not mean it was not newsworthy. We posted a warning and we didn’t sensationalize the story,” Nolan said in response to hate mail he received.

Matthews says we criticize journalists like Nolan who shoot disturbing footage of western victims because it’s closer to home and easier to respect the victim.

“In this case, it’s New York looking out for New York, and shows that we become hyper-protective when something like this happens close to us. When tragedy occurs in the Third World it’s like a zoo; the horrors are used to make a scene and stir emotion. This contradictory approach towards the use of this kind of multimedia content is disrespectful,” says Matthews.