Can Empathy be Taught Through Toys? This Toy Company Thinks So.

How do you teach empathy?

Is it, like other skills, disseminated in schools? Does it breed in ethics classes or religious environments? Or is the product of caring, considerate child rearing?

Ilana Ben-Ari, for one, is putting her money on blindfolds, guidebooks, and a collection of wooden arrows and triangles. After all, those are the components of the Empathy Toy, the debut creation from Twenty One Toys, the Toronto-based toy company she founded to teach under-practiced, abstract skills like creativity, collaboration, and even failure.

SEE ALSO: Uniformity is not our friend: The Centre for Social Innovation

The unorthodox toy and the company behind it, which is based out of Toronto’s Centre for Social Innovation, have won a lot of attention in their relatively short lifetime. They have a laundry list of awards to their name, they’ve garnered countless plugs in the press, and their customer base—hundreds of units in more than 30 countries—is ever expanding.

So how does the Empathy Toy work? It sounds easy—given a puzzle, the first player attempts to instruct a second, who is blindfolded, on how to replicate it—but isn’t. Through communication, problem solving, and a post-game debrief, the toy is meant to be what Ben-Ari calls a “play metaphor.” “When you have a real, tangible experience with something, you can relate it to how you would deal with that situation in your day-to-day life,” she says.

The single toy is just the beginning for the company, which began in part from Ben-Ari’s own educational experiences. “I was a very good student, but being good at school had very little correlation with how well I was doing in life,” she says. “The skills and things we put value on and press on kids seem so far removed from the skills you actually need for life. And I just thought, ‘Why aren’t we teaching these skills?’ Toys can be that Trojan Horse to teach those key skills that people are now recognizing do matter.”

She came up with the idea for the Empathy Toy as an industrial design thesis project while studying at Ottawa’s Carleton University. She originally intended it for children and visually impaired players but, as she tested it on adults with full vision, she “realized very quickly it was just as challenging and rewarding for people of various ages and abilities.” (And, she jokes, “I know it’s a good, fun drinking game.”)

After graduating, though, she shelved the idea, unable to find an existing company that might be interested in buying her invention. The project stuck with her, though, so she returned to it and set out to make it a success—even if she didn’t have incredibly high expectations. “I thought, for sure, schools aren’t going to talk to us,” she explains. “Who am I? I’ve got a toy, I’m not an educator, I have some teeny-tiny artist grants to make a website.”

But then it took off. Ben-Ari did a TED Talk, attended conferences, and won an increasing number of grants and awards. A successful Kickstarter campaign and massive orders from schools and boards in Toronto, Dufferin-Peel, Manitoba and elsewhere have helped, too. “Everything that we’ve done, someone at one point has told us we can’t do it,” Ben-Ari says, listing off people’s warnings: don’t use Kickstarter, don’t make the toy out of wood, teachers won’t understand it, it will fail miserably. “It’s funny how many things we’ve done that shouldn’t work.”

Like many CSI members, Twenty One Toys is intrinsically underpinned by the space it calls home. Ben-Ari moved to Toronto because of CSI, which awarded her a free membership based on the merits of her company. She’s since hired staff from within the community and taken advantage of the fact that legal and logistical help are just down the hall.

Bolstered by the success of the Empathy Toy, the company is working on its next project: the Failure Toy. “We’re called Twenty One Toys and we have one toy. That needs to get remedied really quickly,” Ben-Ari explains, adding that the next logical step was failure. “Everyone’s going to go through failure in their lives, so maybe we should talk about it.” 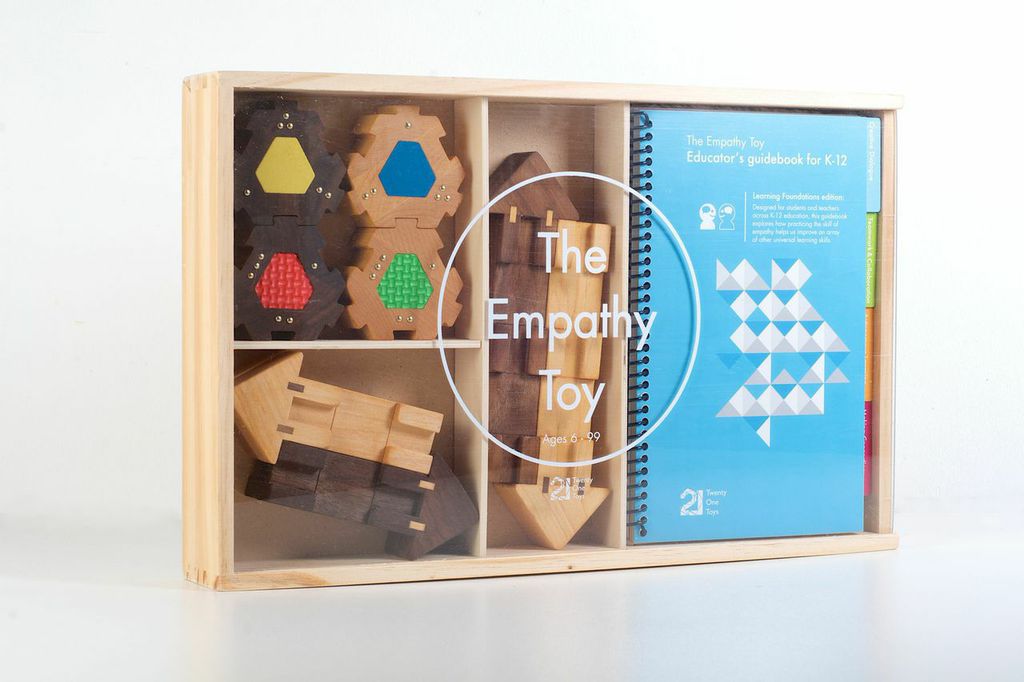 The new toy, which is still in prototyping and will “look like a cousin of the Empathy Toy,” will envision failure not as something to be ashamed of, but as a skill that can be learned and mastered. “True failure is not about making mistakes,” Ben-Ari says. “True failure is about being stuck, not wanting to change and avoiding that because it’s uncomfortable or scary.”

But change is necessary, particularly in a world where we’re unsure what education will look like in even five years from now. “[In schools], the focus is on reading, writing, and arithmetic,” Ben-Ari says. “But we should really be focusing on creativity, collaboration, and complex problem-solving. [Twenty One Toys is] not the be-all and end-all. But we want to be part of that movement.”

This story part of a series of profiles on members of the Centre for Social Innovation.