24 photos of the coldest village on Earth

Located a few hundred miles from the Arctic Circle, and in the dead of the Russian Tundra, Oymyakon is the world’s coldest village on earth. It isn’t exactly a top priority travel destination, but for photographer Amos Chapple it was a photo project he couldn’t resist. He admits the temperature was abrupt and shocking, leaving the saliva frozen to the tip of his tongue.

Six time zones away from Moscow, the town has only one major road leading in and out of it. Known as the “Road of Bones” the road was built by Gulag inmates under the Stalin regime.

Arriving in Oymyakon, Chapple was struck by the village’s utter emptiness. “I had expected that they would be accustomed to the cold and there would be everyday life happening in the streets, but instead people were very wary of the cold,” he says.

In December, the days are shortened to a mere three hours, with visibility constantly impaired due to a thick layer of fog. Residents must leave their cars constantly running so the mechanics don’t freeze up, and bathrooms are mostly located outdoors due to the risk of frozen pipes. How people poop in this weather, let alone survive is beyond me.

1: A frozen Bus Stop in Yakutsk 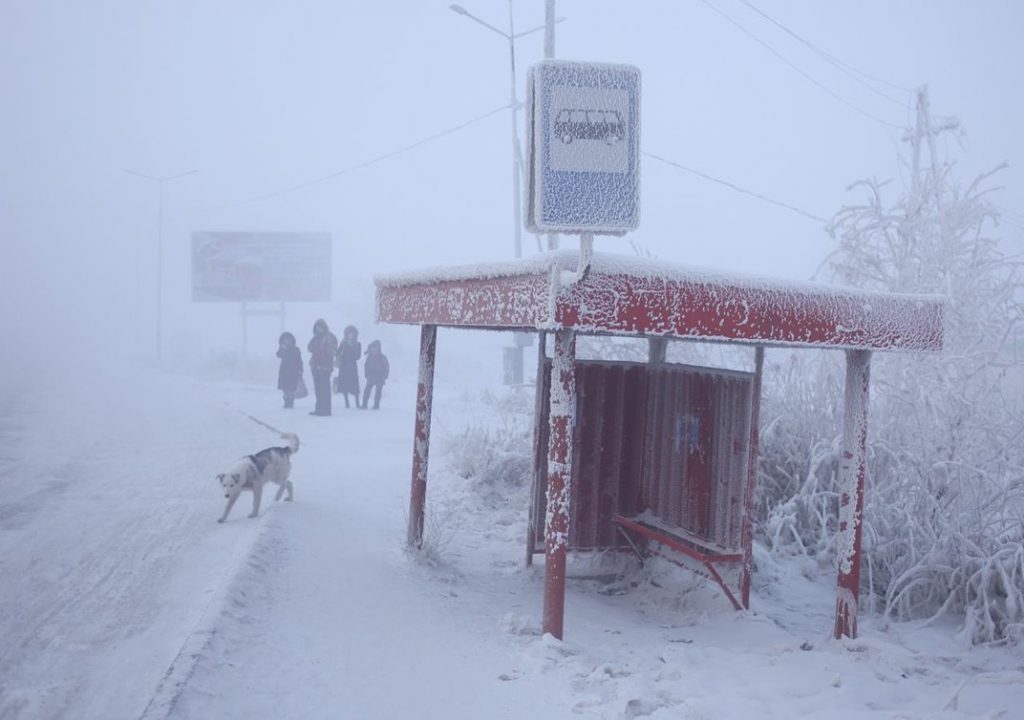 2: Ice-crusted statues in a park commemorating the fallen of World War 2 in Yakutsk 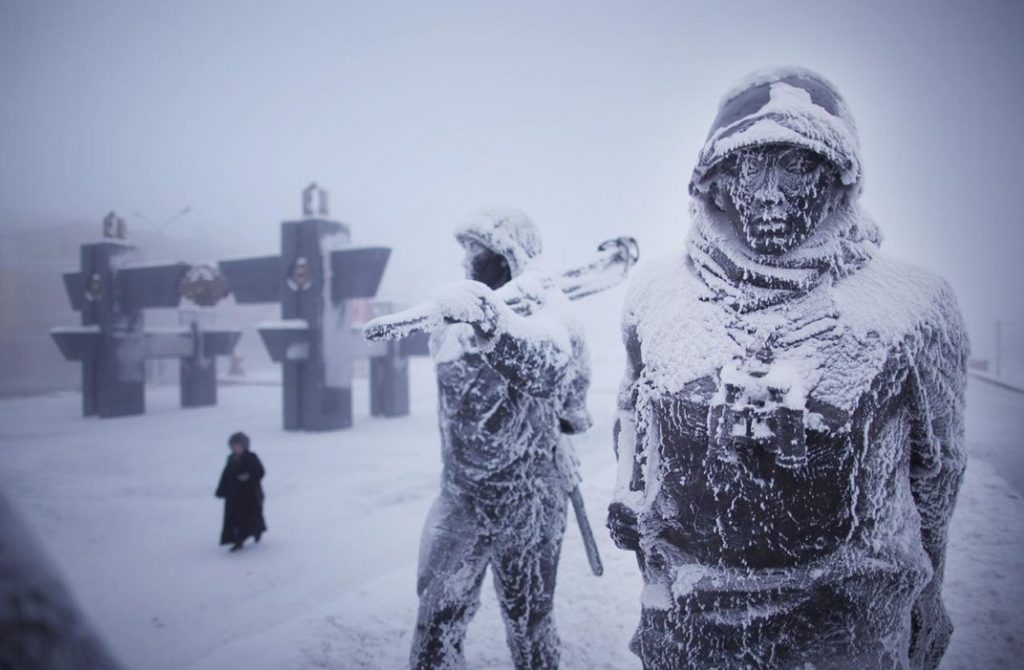 3: A Yakutian woman in the city centre. Steam from the factories, cars and people creates a thick fog in winter, which lingers through the coldest weeks. 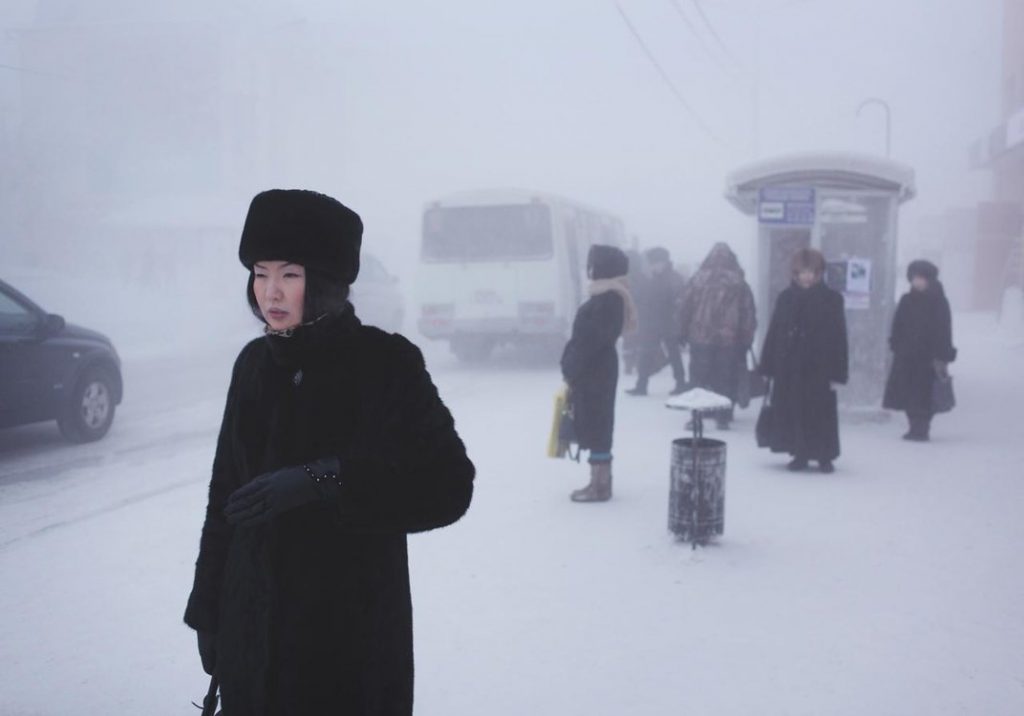 4: A statue of Ivan Kraft, one of the first governors of Yakutia, stands caked in frost most of the year. 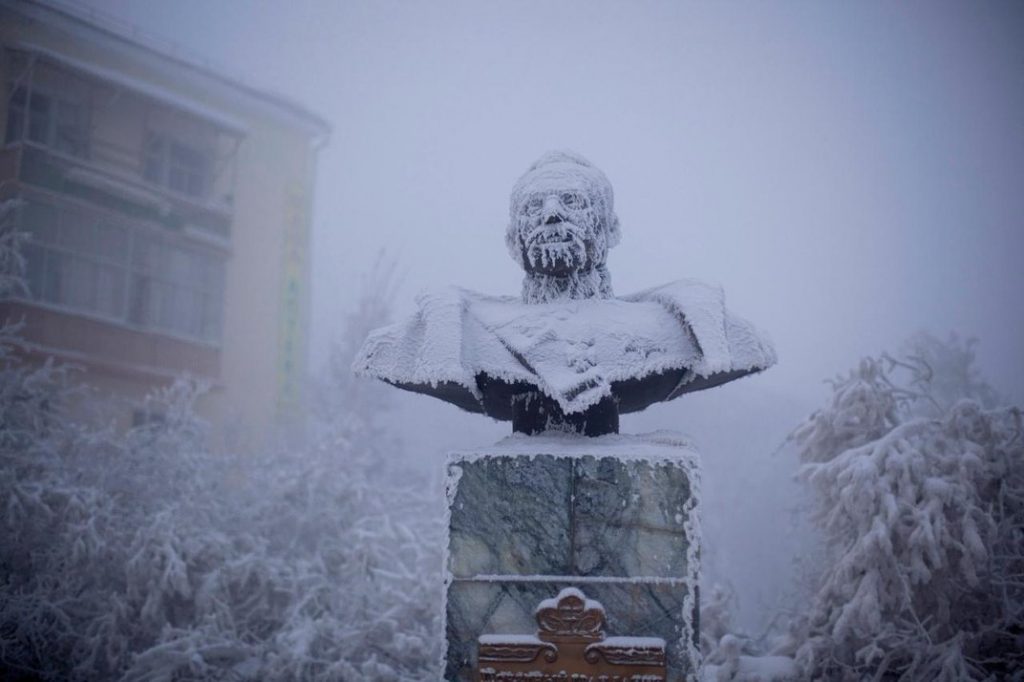 5: A  guard dog in the suburbs of Yakutsk. 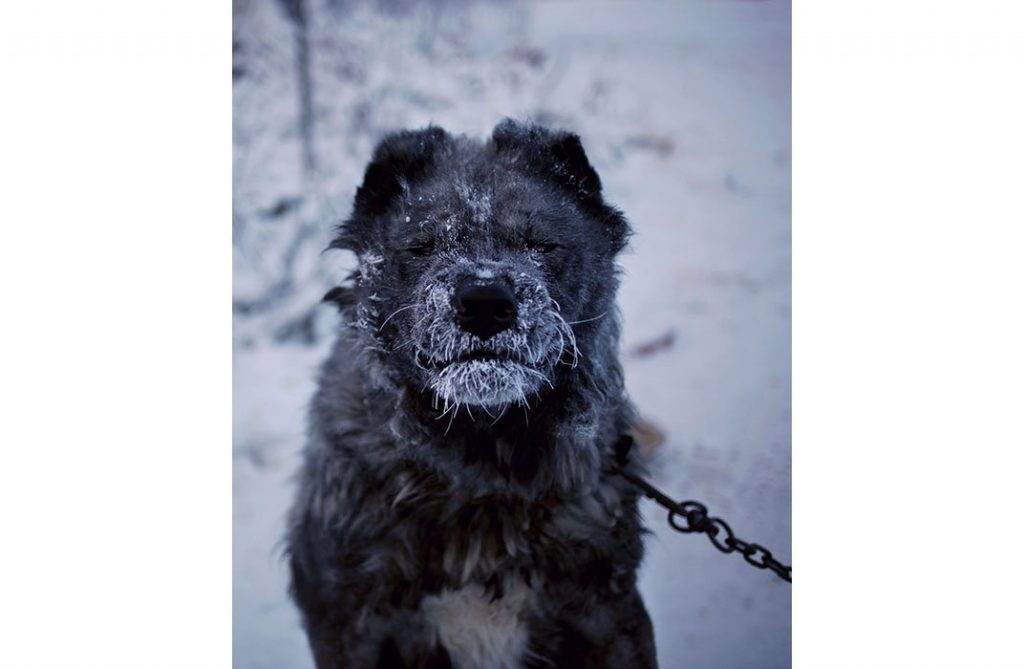 6: A local girl returning home from university. While the majority of the city’s population are indigenous Yakutian, many ethnic Russians and Ukrainians moved to Yakutsk during Soviet times, lured by high wages for working in harsh climate. 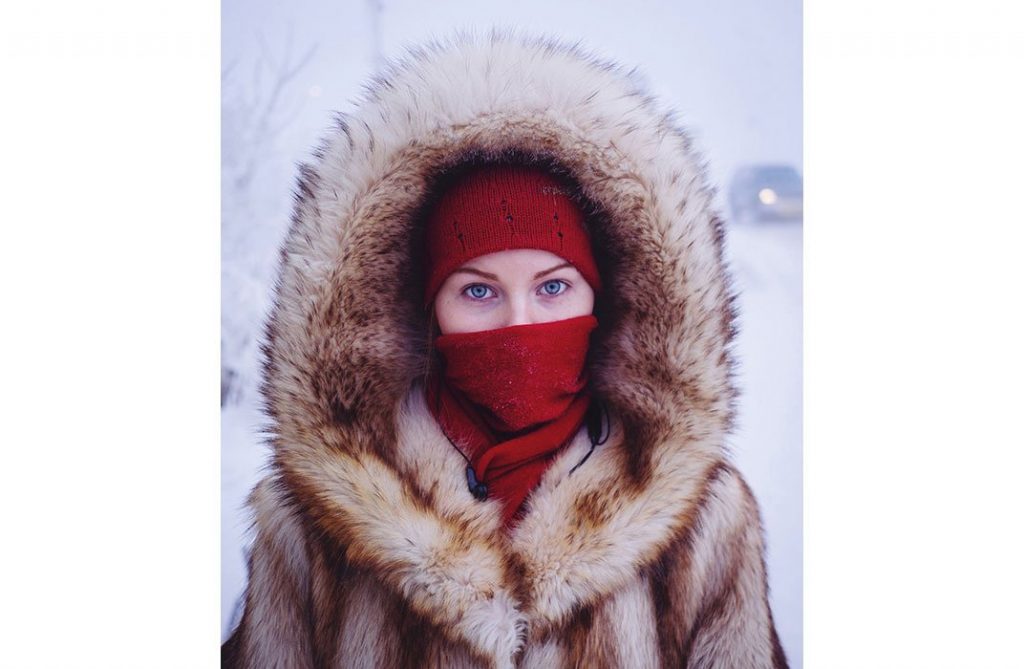 7: Summer shoes waiting out the winter in a shed in the suburbs of Yakutsk. 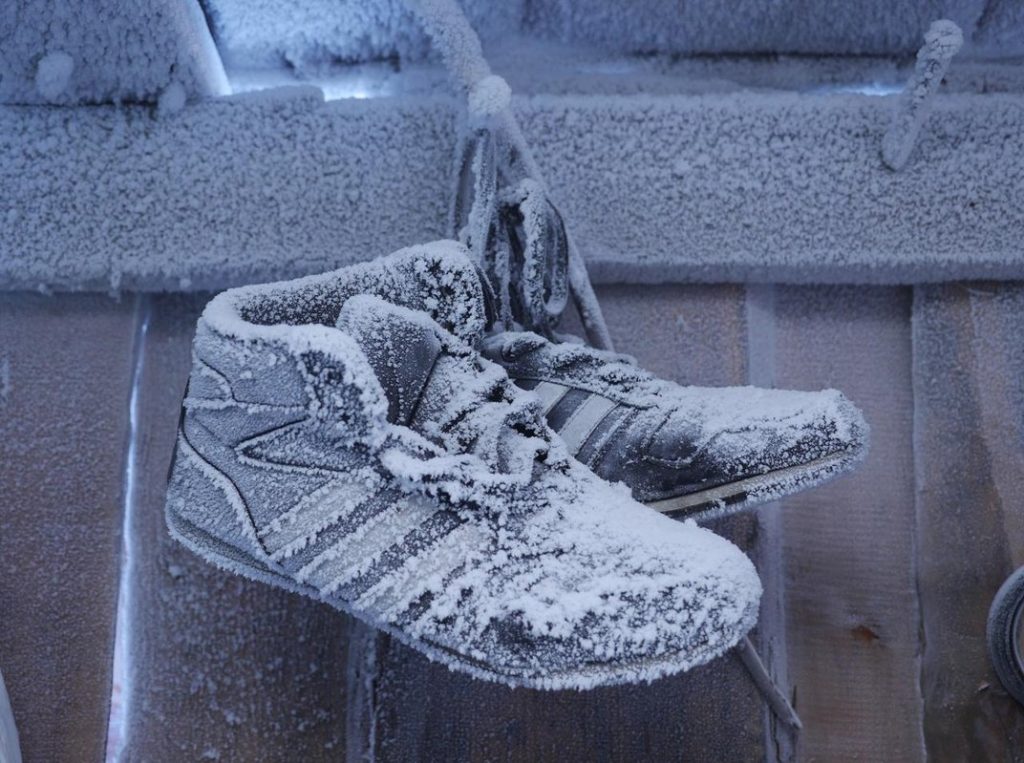 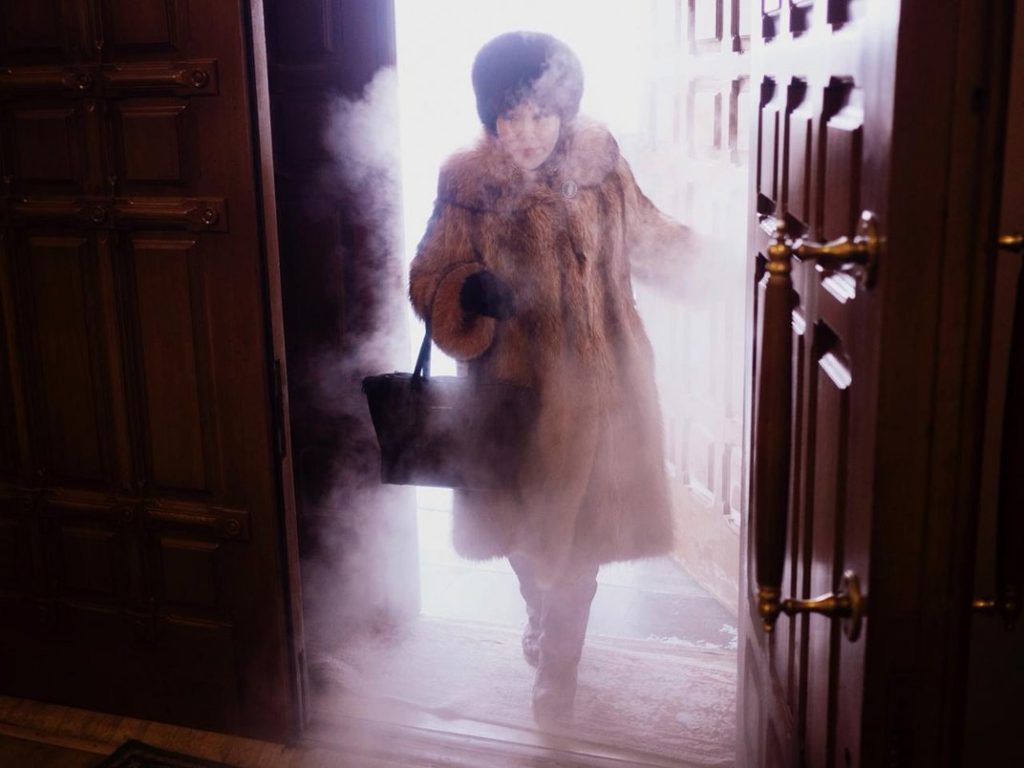 9: A woman clamps a mitten to her face to protect it from the cold on a minus 63 degrees Fahrenheit day in Yakutsk. In the background, a statue of Lenin presides over the central square of the city. 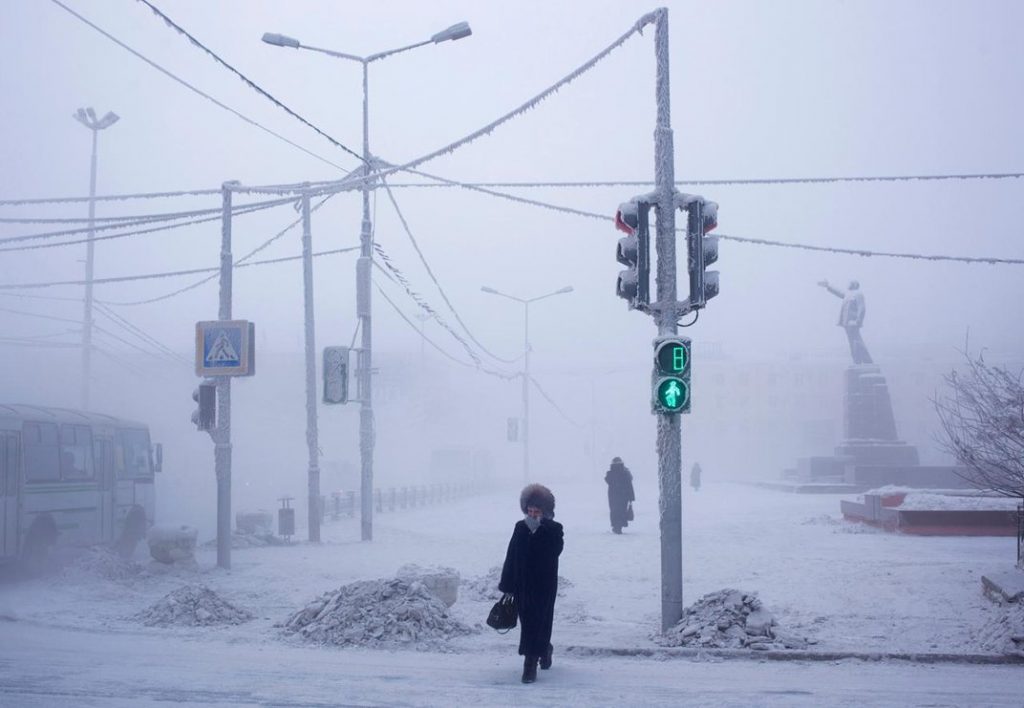 10: A frost-encrusted house in the centre of Yakutsk

11: A woman selling an Arctic hare, along with her usual fare of frozen fish, in the central market of Yakutsk. 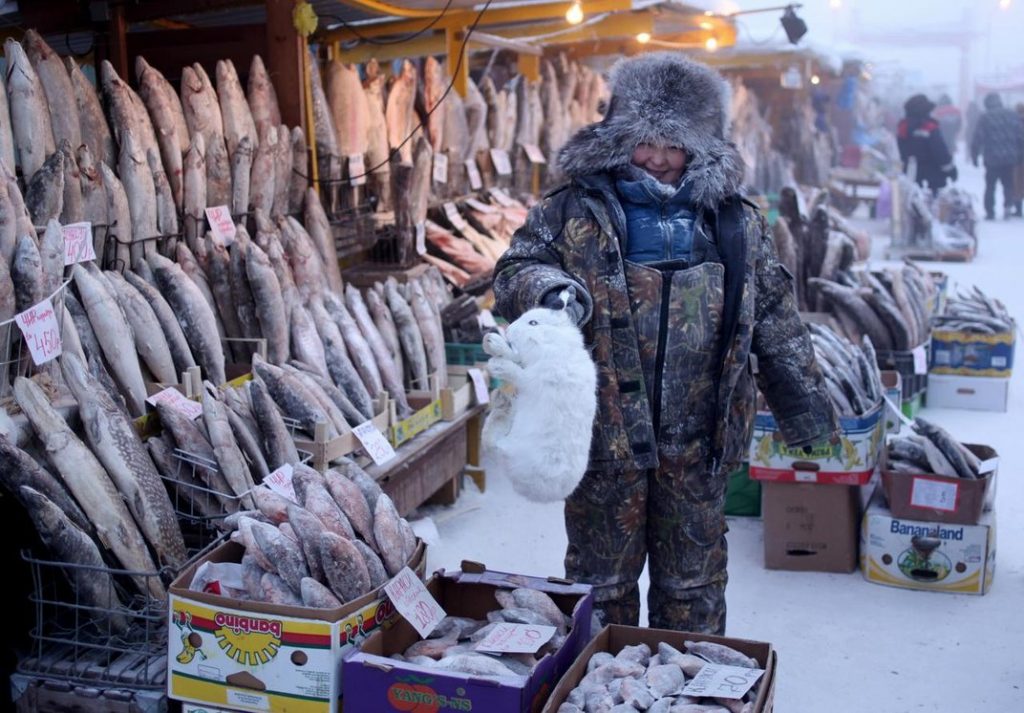 12: The road to Oymyakon on a minus 63 degrees Fahrenheit evening. Gasoline turns solid if cars are switched off. On long night drives, the drivers stop in the middle of the road, tip back the seats and sleep with the lights on and the engine running. 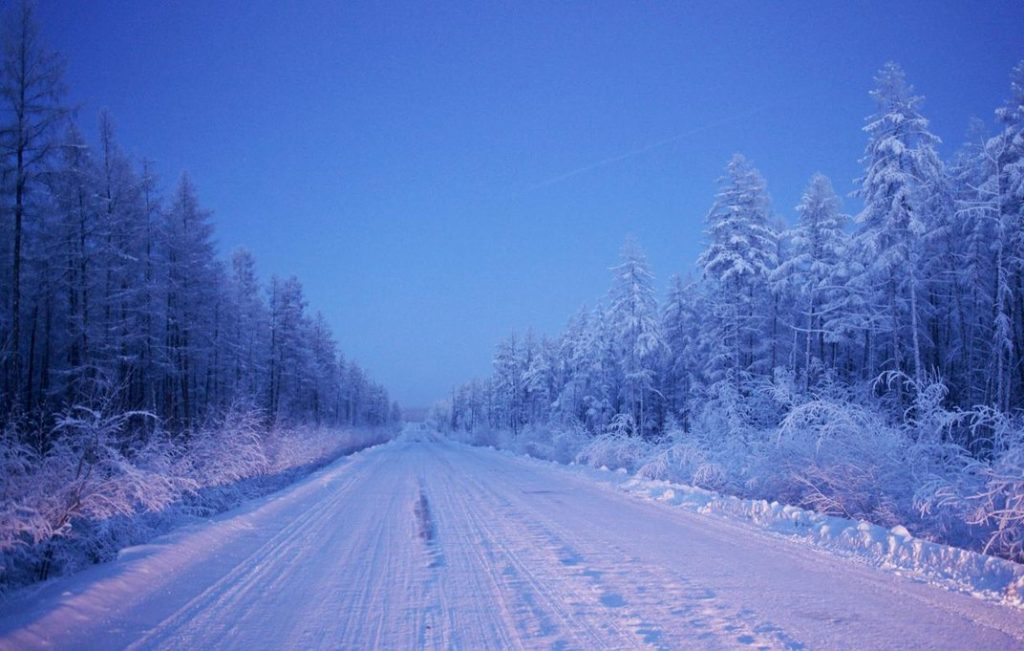 13: A gas station and Christmas tree on the road to Oymyakon. Cars must be run continuously when making the journey to Oymyakon, and so 24-hour gas stations are essential to winter transportation. Workers in the regions isolated gas stations work two weeks on, two weeks off. 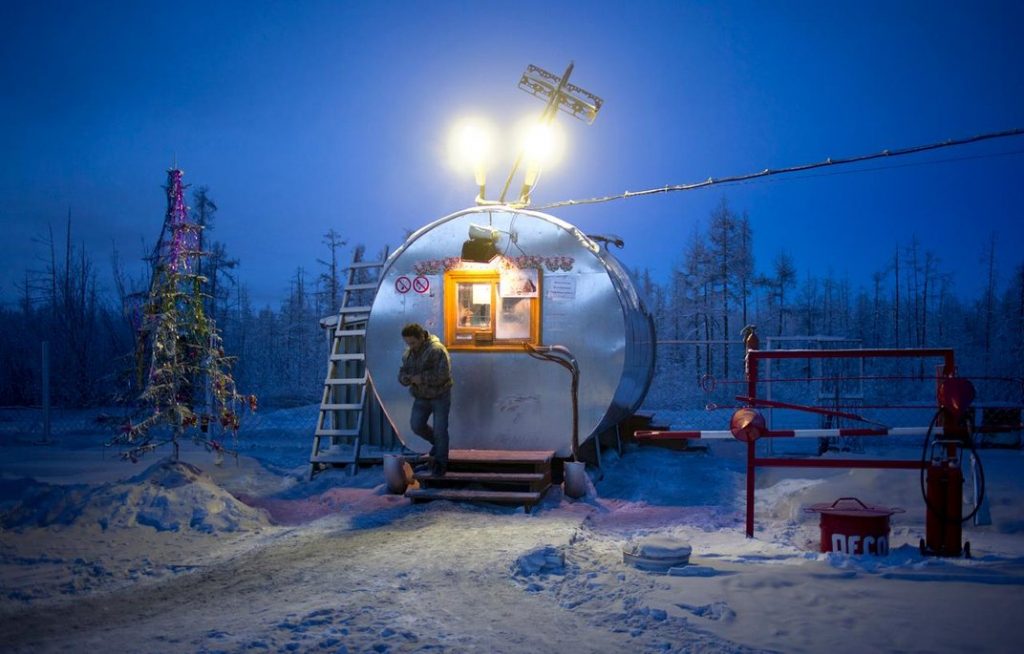 14: Café Cuba, a teahouse serving reindeer soup and hot tea in the wasteland between Yakutsk and Oymyakon. 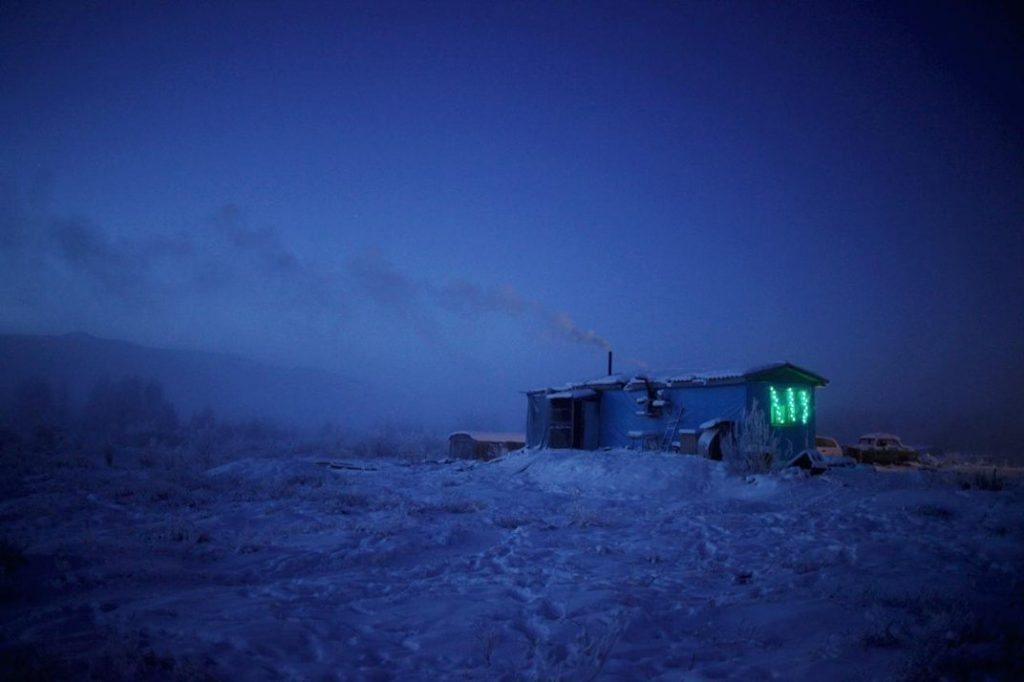 15: A toilet on the tundra at a gasoline stop on the road to Oymyakon. A sharp spire of frozen poop rose almost to the ground level from the pit beneath. 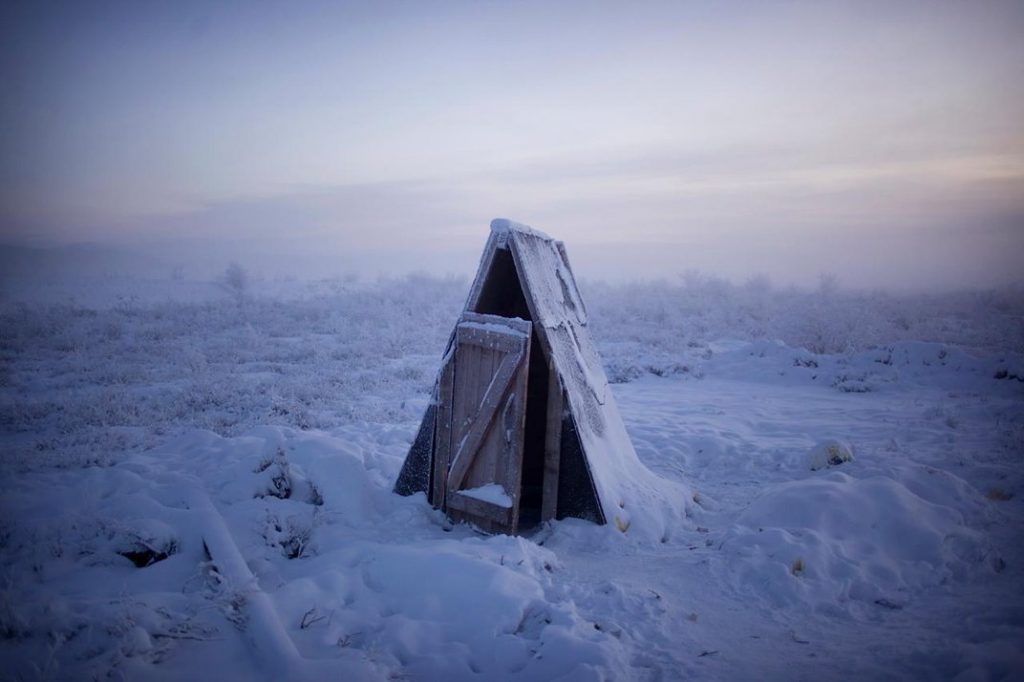 16: Oymyakon villiage at dawn; the heating plant and its constant plume of coal smoke are at left. 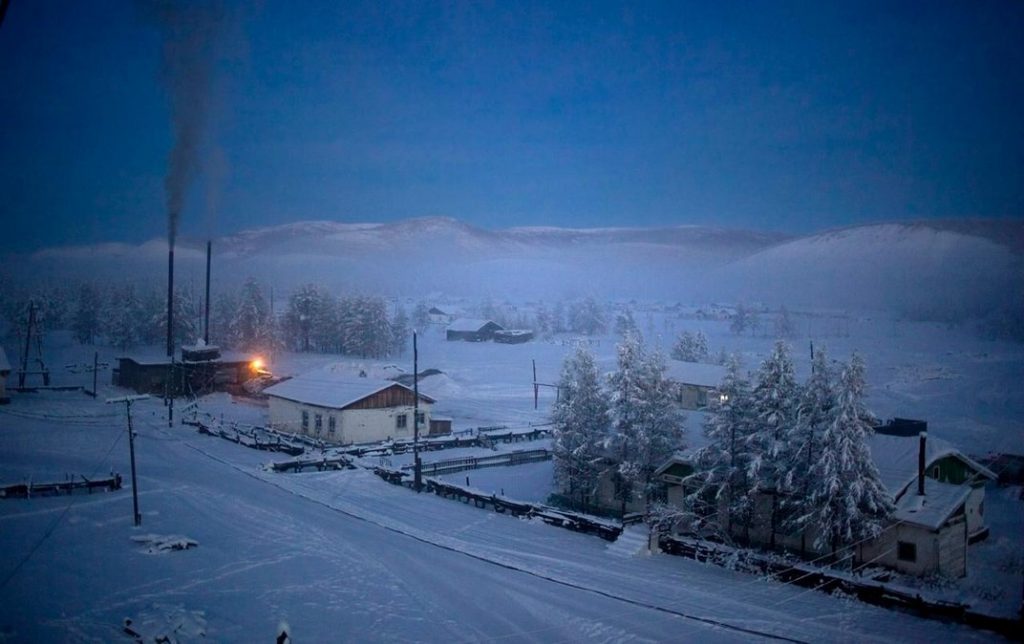 17: The Communist-era monument marking the record-breaking temperature of minus 71.2 celsius (minus 96.16 Fahrenheit) recorded in Oymyakon in 1924, The sign reads “Oymyakon, the Pole of Cold.” 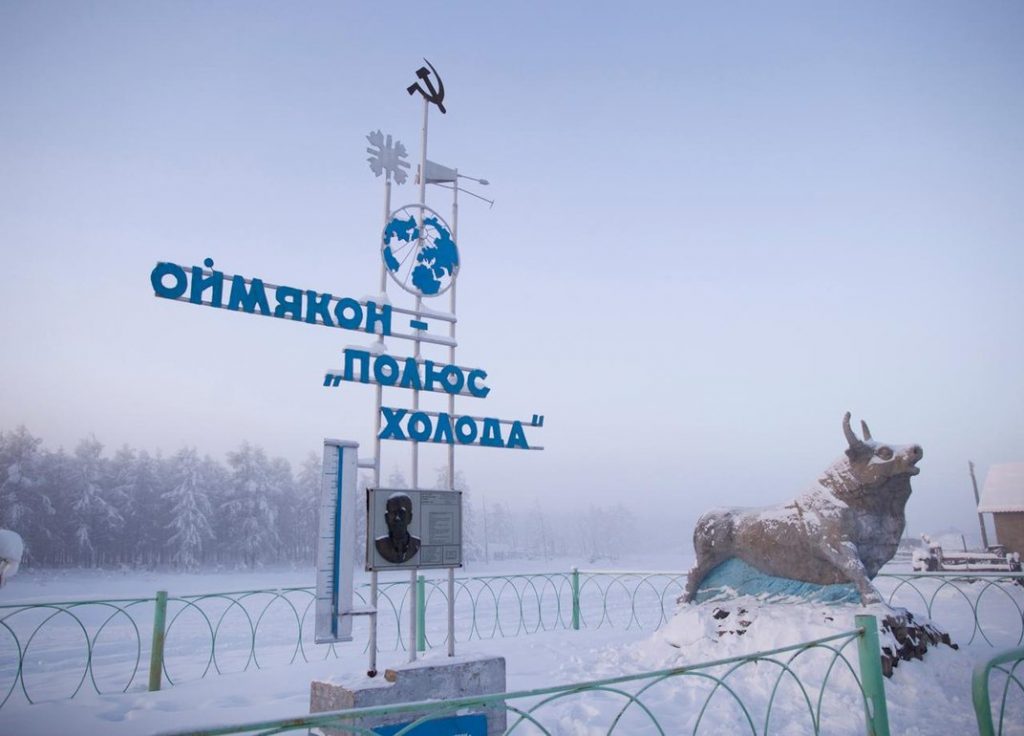 18: Heat for Oymyakon is provided by a coal-fired water heating plant. 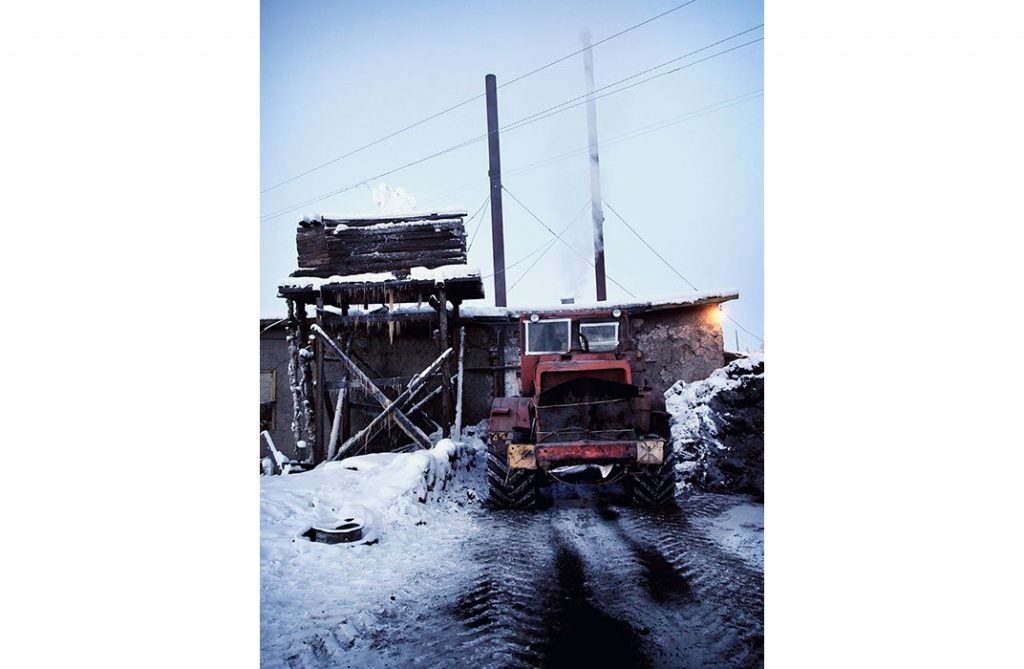 19: Every morning this digger delivers fresh coal to the plant and carries away the burnt cinder. 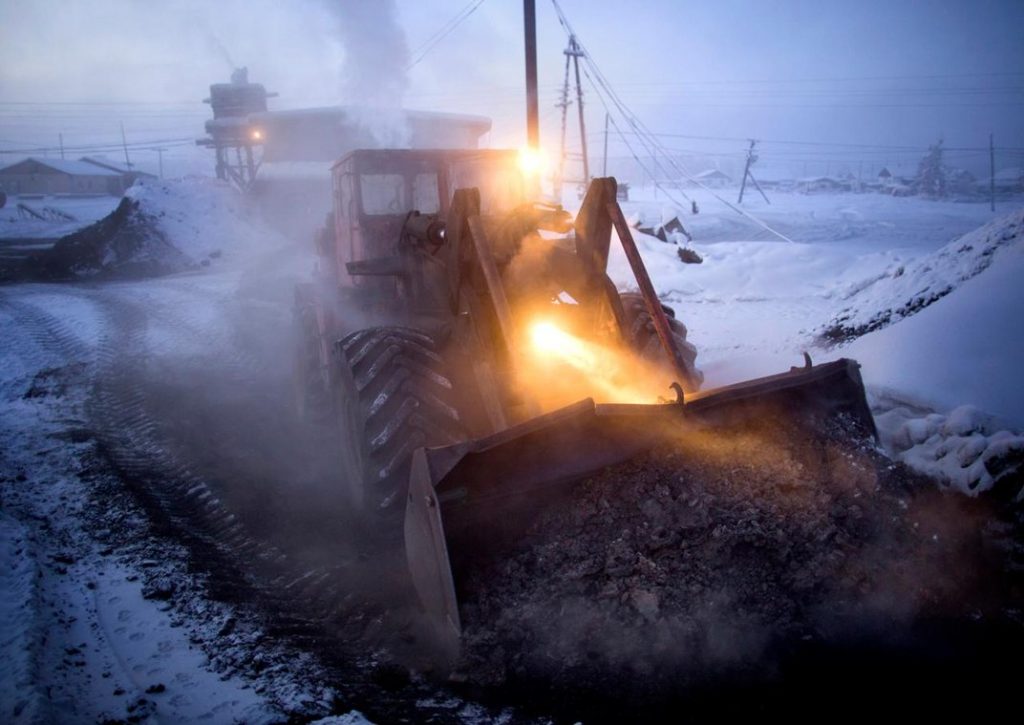 20. Oymyakon’s only shop, providing supplies for the isolated community.

21. Farmer Nikolai Petrovich closes the door to his cows’ heavily insulated stable after putting the flock to bed for the night. 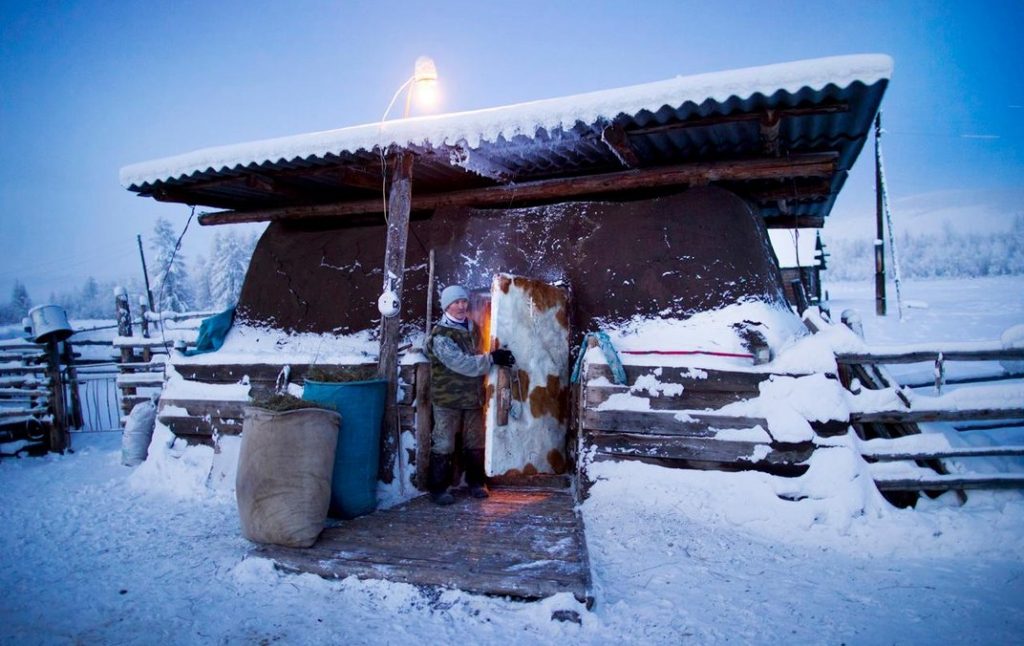 22. A retired teacher, dressed for a quick dash to the toilet. Most toilets in Oymyakon are long drops out on the street, due to the difficulty of digging through permanently frozen soil. 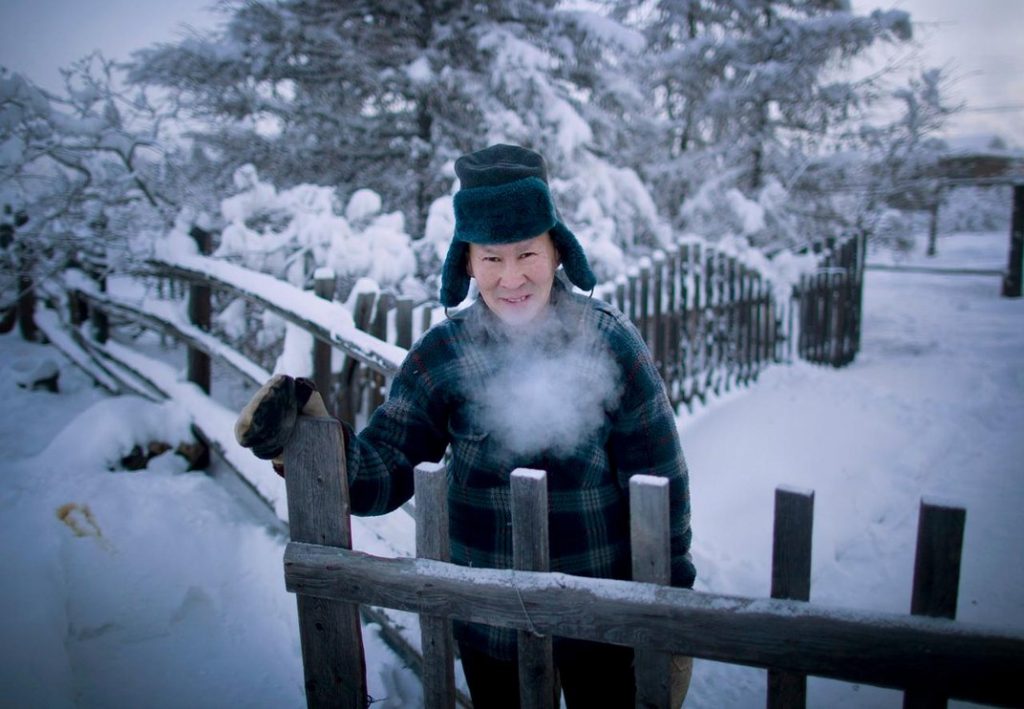 23. A truck diver uses a small flamethrower to the drive shaft of his truck. 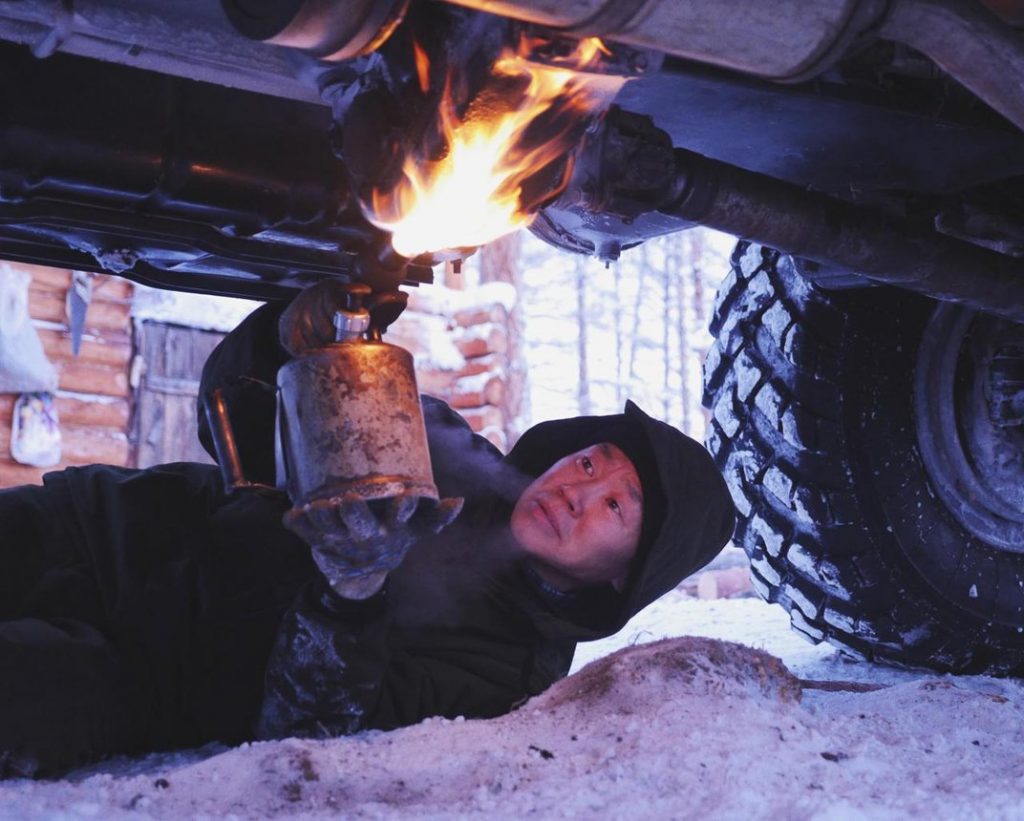 24. A young drunk in Oymyakon. A moment earlier he warned the photographer to stay off the streets after dark, saying “in the nighttime these streets belong to me.” 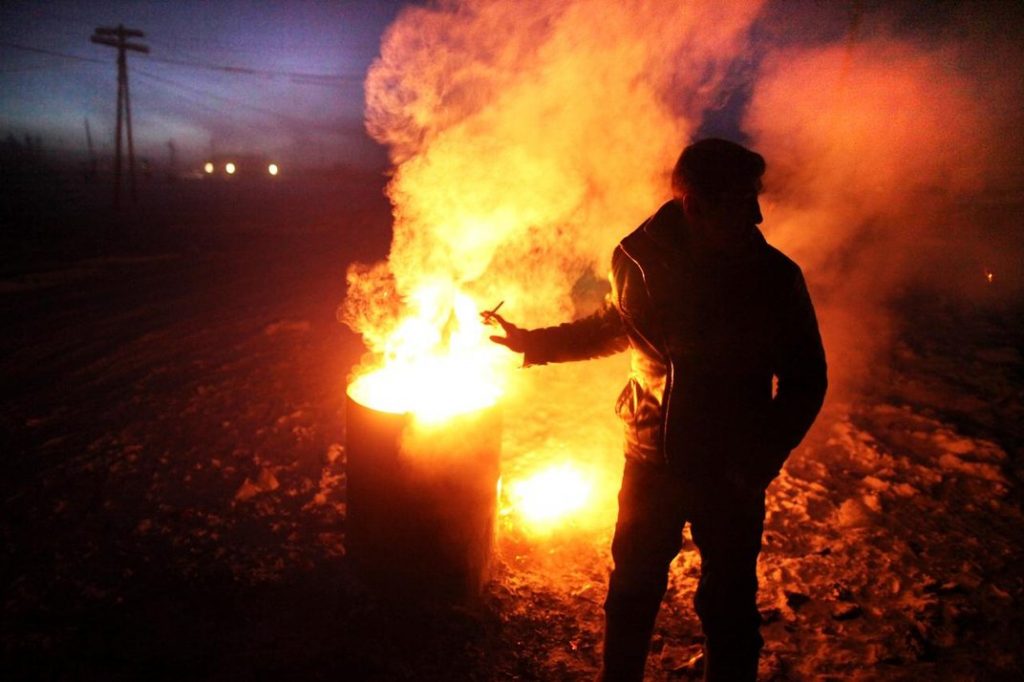