Written and imaged by: Annie Sakkab

Gender role is subconsciously defined by our society and cultural background. Wolfgang Skinner, nicknamed Wolfie, is a gender independent six-year-old boy. He is fortunate to have three parents and three siblings who are supportive in every way. But that doesn’t mean it’s an easy path for him. The simplest things like going to the bathroom or joining a sports team can be traumatizing. And the result is bullying that leads to feelings of social exclusion. At age six, Wolfie is an outspoken advocate, a word kids of his age don’t even know.

Wolfie had just turned five when I first met him last May. It was during a shoot at the Miss All Canadian Pageants event held at the Hampton Inn & Suites in Barrie. It wasn’t until the end of the event that I’d noticed a little child with a beautiful sparkly tiara. She had the biggest smile. Blue eyes wondering and looking at all the other girls putting on their makeup, trying out their pink outfits, wishing she could do the same.

“What a beautiful girl she is,” I said.

“He’s not a girl, he’s a boy,” his mother Jessica Skinner replied.“He loves the colour pink, and he loves to dress up in pink dresses.”

It was an event for girls between the ages of four and six. Jessica figured maybe if Wolfie were able to participate he would feel a sense of belonging. But he wasn’t allowed to participate as a boy. He was pondering anxiously all day waiting to see if he could just put on his dress.

“He’s been feeling very depressed at school and doesn’t have many friends. He has already had his serious bullying like sexual assault, and that stuff you have to fight against.”

I can see it wasn’t easy for Jessica to talk about. She wasn’t even sure that she was doing the right thing being at a pageant event. But she was sure of one thing. She was determined to make it better for Wolfie.

Jessica, along with her partners Jrd Skinner and Alex Martin, are a growing number of parents who refuse to accept the mental health model of the past that diagnosed gender non-conforming children with Gender Identity Disorder. Gender freedom and expression, especially for children and teens, is not always accepted, and the result can be devastating.

The suicide of Cincinnati transgender teen Leelah Alcorn on Sunday Jan. 4th, 2014, sent a shock through the LGBTQ community when she was struck and killed by a tractor-trailer. This is something Wolfie’s family will never take lightly. To be a caring and accepting family is the most important thing they can provide Wolfie.

A few months later, I met Wolfie’s family at their home in downtown Acton. As soon as I arrived, Wolfie came running through the front door to give me a hug and a kiss. His pink tutu skirt whirled around him as he jumped towards me. He was wearing black tights and black running shoes with pink rims. He seemed happier and more confident.

He was finally allowed to wear what he wanted to school. Pink dresses and outfits, sparkly shoes, pink hair clips, coloured nails and makeup.

“I always let him have a little sparkle, a little pink, a little this or that, but never all together, totally just feminine all out going for it. And when we did, just the way that he carried himself was so different. It was like meeting him for the first time. That was the first time that I really got a taste of it.”

When I asked Skinner what about his father, she told me he was a little hesitant at first. It was mostly centred on his fears of bullying, but his support has always been the same.

“He would call him a boy, a girl, an astronaut or a fairy, it doesn’t matter. He is who he is. He’s a comet, and you just got to chase him as fast as you can. Because he is going to be who he is. You can’t push a child in that direction,” his father Jrd explains.

The day that Wolfie had the courage to ask his mom to take his dress to school, his teacher Sarah Randal did everything she could to support him. She talked to his classmates and encouraged Wolfie to wear the dress he had carried. Jessica knows at any point Wolfie feels threatened or bullied, she can immediately talk to his teacher and his principal to make it better, and confront the individuals who were responsible.

Later that day, I met Wolfie’s biological mother Alex and his father Jrd, as well as his brothers Gray and Darwin, and his sister Emily. They are certainly not what we consider a traditional family. Jessica and Jrd had their own child who was five-years-old when they met Alex. It took a little bit of time to get the families together before Alex and Jessica had their own children together with Jrd. They are a family of seven, and the children consider themselves lucky to have so many parents. They understand completely this isn’t the norm for a lot of people.

“We find it works well for us having three parental figures around. Our younger children call us mommy and mamma. We get judged by people sometimes but we don’t let it interfere with us,” Alex explains. 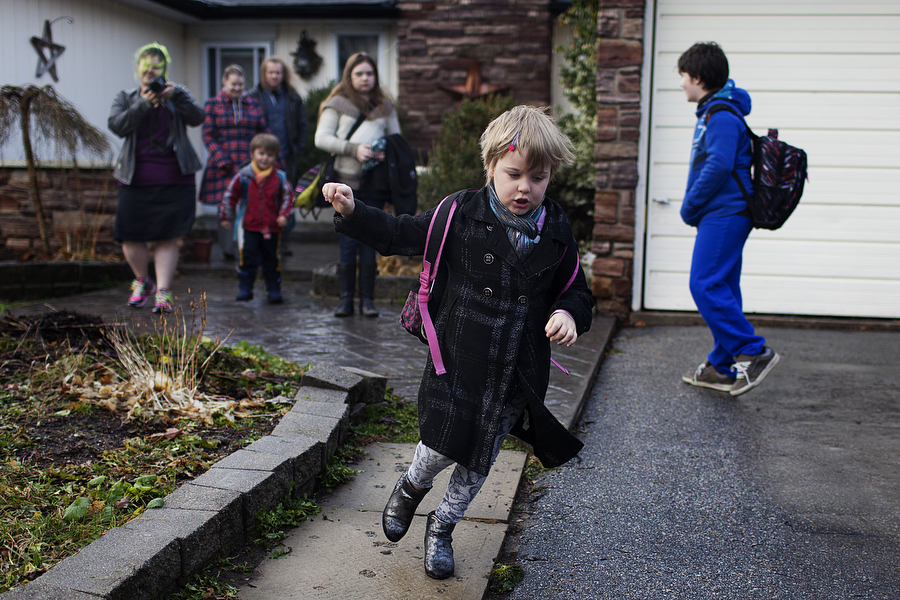 It was almost six and time for dinner. Wolfie had his blue Elsa dress on. He sat next to me and whispered in his momma’s ears

“Can Annie stay with us tonight momma?”

His smile grew bigger when she said

“Yes my darling, of course she can stay with us.”

Skinner later explained to me why Wolfie asked her that question. I knew in my heart that we’ve connected. But it was more than that for him. He internalizes his feelings and always seeks out female adults because he feels safer that way. He avoids children he doesn’t know, that he’s afraid will turn him down for a play date outside of school. Watching him in the evening, I can see he’s got all his confidence. But I’m sure it can kick him back at school. It certainly is a roller coaster, but he tries to deal with it as much as he can.

The incredible and unconditional support and acceptance from his family and school help him to succeed and achieve good grades, and ensure that he maintains good mental and physical health. But the future of Wolfie is no doubt a stress that they always think about, Jessica confesses.

For Jrd, bullying is what worries him the most.

“I have this vision in my head of him being 16 and still wanting to be who he wants to be, and somebody beating him up. I just want him to have the smoothest happiest life he can possibly have without encountering that kind of adversity.”

Wolfie is a happy child who is brave.

“Do you feel different?” I asked.

“I don’t really feel different. Because I’m not really different from all the other kids.”

That night he said the most beautiful thing. I felt humbled that a six-year-old child would say something so sincere as he was brushing his mommy’s hair.

“It’s called respect when you care about someone and you’re helping them and you’re doing stuff for them.”

Toronto based photojournalist Annie Sakkab, has traveled the world documenting socio-cultural issues and questions of identity.  Through her photography, she raises awareness on social exclusion and uprooting.

Her story, To Be a Boy, is a documentary project focusing on a young boy named Wolfgang Skinner and his gender role.