What hiking to Abbot Pass Hut taught me about perseverance

We were about half way up the scramble of the gully when hail started to bounce off our helmets. We stayed close to the side of a towering bolder while people added layers and adjusted their buffs. Then we trudged on. It’s hard to keep time when you’re hiking. When you’re watching your steps, so as to not kick rocks behind at your friends, and slowing climbing upwards, its all a mental game and the experience takes over. But it seemed that we weren’t in the bad weather for too long when, on our left hand side, Abbot Pass Hut presented itself to us as a safe haven.

I don’t remember when I decided to spend my summer in the Canadian Rockies, but it was probably one of the best decisions I’ve ever made. After graduating from University and living in downtown Toronto, escaping to the mountains sounded like just what I needed to do.

I knew that Lake Louise had good hiking, but I didn’t realize the level of difficulty that would soon become my normal routine. Walking to work with a co-worker on one of my first days I asked what kind of trails we could do before our evening shifts. She pointed to a set of mountain peaks claiming that those were definitely doable. I felt way in over my head. The first summit I did a couple of days later nearly killed me, but over the course of the last four months, to my great surprise, I’ve improved greatly. As a kind of final hurrah before the weather went south, a group of six of us booked a night at Abbot Pass Hut, the second highest standing structure in Canada, and the setting of my favourite Rockies experience.

Wedged in between Mount Victoria and Mount Lefroy, the hut sits at an elevation of 2,926 meters directly on the great divide, meaning you can sleep in Alberta and make breakfast in British Columbia. Built in 1922 from the rocks upon which it stands, the hut now belongs to the Alpine Club of Canada. It was originally erected to commemorate the death of Philip Stanely Abbot, the first Canadian mountaineering fatality. He died being the first to attempt to reach the summit of Mount Lefroy in 1896.

There are three ways to access the hut. The most common is from Lake O’Hara which requires taking a Parks Canada bus up to the lake. Reservations are required in order to limit the amount of visitors in the area to preserve the environment. The second is by taking the Fuhrmann ledges from Lake Louise, it takes about twice as long. The final and aptly named route is called Death Trap. This way takes you straight up the Victoria Glacier and all its crevasses. We took the first one. 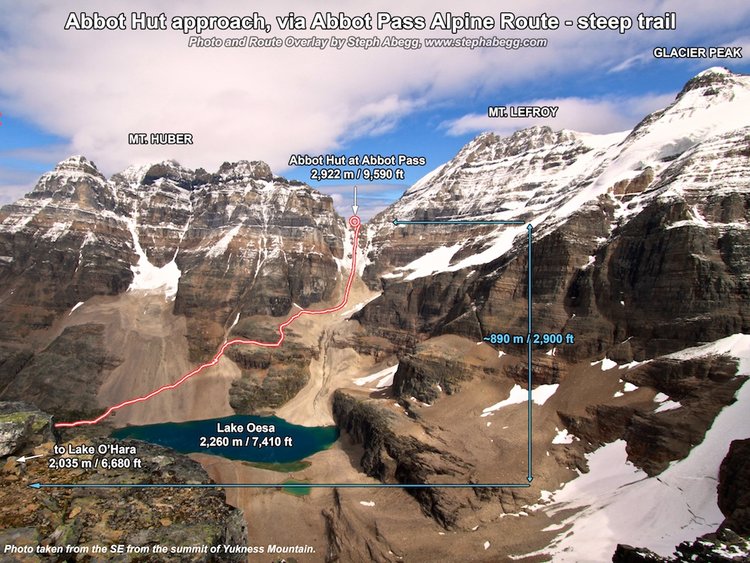 With backpacks full of noodles and energy bars, we headed out from lake O’Hara around 9 am in high spirits. The weather looked optimistic, we thought we might miss the rain. We took our time up to lake Oesa, the dividing point between the gradual uphill trail and the steep scree. Scree (or scramble) refers to a mountain face covered in loose rocks. This is the part where we donned our helmets preparing for the worst case scenario of a rock flying back at us. We began the slow ascend keeping an eye out for blue and yellow markers painted on the boulders. 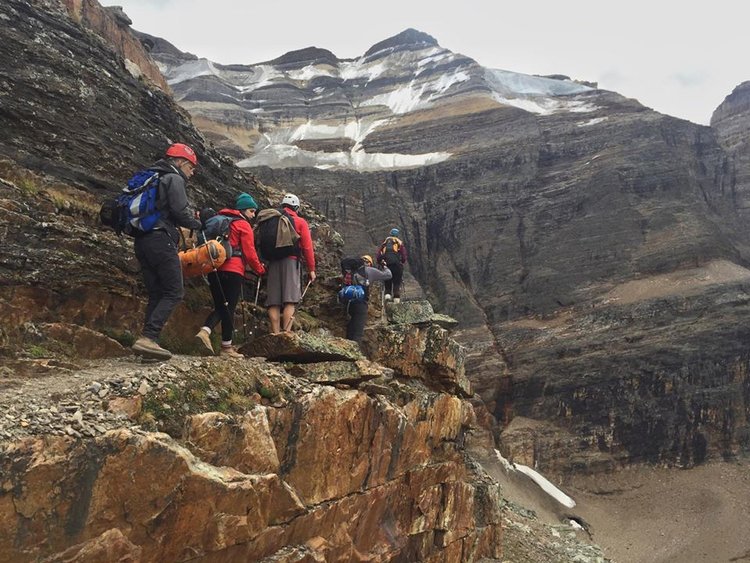 When we arrived at the hut soaking wet we were the first ones there. With the view blocked by the clouds and precipitation (it’s hard to tell whether it was still hailing, snowing or raining – maybe a bit of all three) the boys began to make a fire and we hung our clothes up to dry. The hut was spacious but cozy. The first room had two long tables with benches on either side and a fireplace at the end. The kitchen, just beyond that room, consisted of propane stoves and two sinks that drained into buckets below. Little stones labelled ‘boiled’ or ‘not boiled’ placed on top of pots indicated whether or not the glacier water inside them was safe to consume. Next to the front door there was a ladder that lead upstairs where two long rows of connected mats would be our beds for the night.

It was early afternoon and as the realization that we had nothing to do until our descend the next day hit us we settled in for a cozy evening. The following hours transpired with card games, a bottle of wine and plenty of rekindling the fireplace. More people showed up throughout the day, having faced way worse weather conditions than ourselves. There ended up being 14 of us in the hut that night, although it could fit up to 24. When the weather finally cleared we went outside to get some photos. The views from that high up were incredible, but nothing compared to what awaited us the next morning.

I woke up around 6:30 the next morning, put on a headlamp and went out to the outhouse. There was snow everywhere and it was still coming down. Back in the hut I began to worry about how we were going to get down the mountain. Unable to sleep I read under the propane lamp. By the time one of our group members came down it had become light outside. I looked out the window but we were enveloped in a cloud and I couldn’t see anything. Then he exclaimed how beautiful it was and I shot up from the bench. All the cold, the snow, the triple layered socks was beyond worth it for what stood before me.

I woke up the rest of my group insisting that they had to see the snow dusted mountains before a cloud rose and hid it all again. It didn’t even feel cold outside that morning, though it had to be a couple degrees below freezing. The view was truly breathtaking and I’m beyond thankful to have had the opportunity to experience it first hand.

As we packed and readied ourselves to leave, the clouds overtook the route down and the task before us looked daunting. But as we started to descend I realized it wasn’t going to be so bad, and a sense of pride came over me for being able to complete our little journey. The reward of being at that hut made me realize how far I’ve come from a fairly inactive person to someone who could hold their own on a hike, something I never thought I could do.

Living in the Rockies has been an adventure, a thrill at times, and as much as I’ll miss it it’s only gotten me excited for all the other things I want to complete. Other adventures, other thrills, that thanks to this place I have the confidence to do.