Just a few metres from the airport in Maputo, Mozambique’s capital city, is the Huléne dump. Here, several hundred people frantically search through mounds of garbage for forgotten treasures, for something of utility, or for something they can trade for bread or milk. Men chase after a garbage truck that eventually dumps heaps of candy wrappers, socks, and dead animals. A child smiles innocently among the rubble. Two women eat a dog’s raw, decomposing head.

This place is home to many faces and many stories—but only one common situation. But it would be a mistake to think that there is no room for embarrassment among those forced to survive off other people’s waste; many of them only ended up here due to the economic slump.

José Ferreira’s Trashland necessitates self-reflection for first-world viewers. In our circumstances’ easy guarantees, we often take our luxuries for granted. Despite the conditions in which they live, many show kindness in their eyes—a human quality sometimes absent in the jaded smiles of the developed world. Ferreira’s photos do not pass judgment on those who scavenge the Huléne dump. Rather, they invite us to judge ourselves. 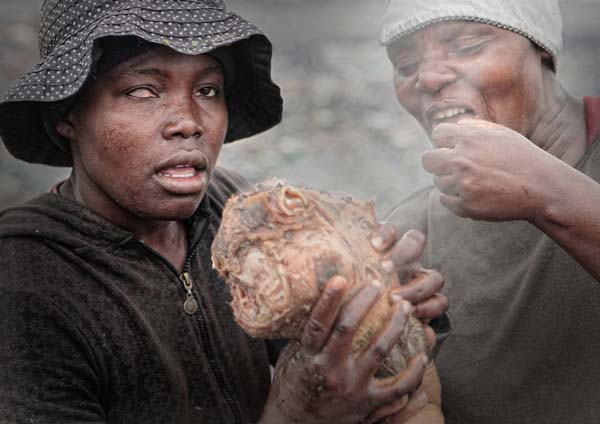