Longing For Love, is the story of a war veteran orphaned by history. The Korean War is also known as the “Forgotten War”. Korea had been controlled by the Japanese Empire, up until 1945 when they surrendered to the Allies following the atomic bombing of Hiroshima and Nagasaki. There had been growing tension, as the country was split into North and South, the North controlled by the Soviets under the Stalin-Communist model, led by former communist soldier Kim Il Sung. In the South, Americans assumed control with a democratic government in Western-fashion, headed by President Syngman Rhee.

On June 25th 1950, Kim Il-Sung ordered an invasion force of 90,000 men to storm across the 38th parallel, backed by the 150 Soviet supplied T34 tanks to overrun the Southern capital city of Seoul. President Harry Truman responded by sending American forces for support to end the North Korean assault. This ignited a three-year intra-state war that resulted in millions of casualties. President Syngman Rhee ordered the Bodo League Massacre on June 28th, in which, according to Prof. Kim Dong-Choon, Commissioner of the Truth and Reconciliation Commission, at least 100,000 people were executed for being suspected left-wing sympathizers.

According to Professor R. J. Rummel, the Northern Korean Army was responsible for at least 500,000 civilian deaths.

North Korean P.O.W. camps were extremely unsanitary during the war and U.N. prisoners suffered horrific treatment and malnutrition. Out of 7,000 U.S. prisoners, 40 percent died in captivity, many more less than a year after the war’s official end. On September 17th 1996, The New York Times, citing declassified Air Force documents, suggested, “more than 900 Americans were alive at the end of the war, but were never released by the North Koreans.”

David Lundark’s photo essay shows the physical and emotional scars that consume the life of a veteran following the sufferings of warfare. Bathed in harsh white light, it is almost as if the veteran stands on the borderline of life and death, having witnessed the transition among friends and strangers so many times over.

Largely overshadowed by the tragedies of WW2 in the historical memory, the 26,000 Canadians and 5,720,000 Americans who participated in the war have eyelids stained by an experience that refuses to be forgotten. 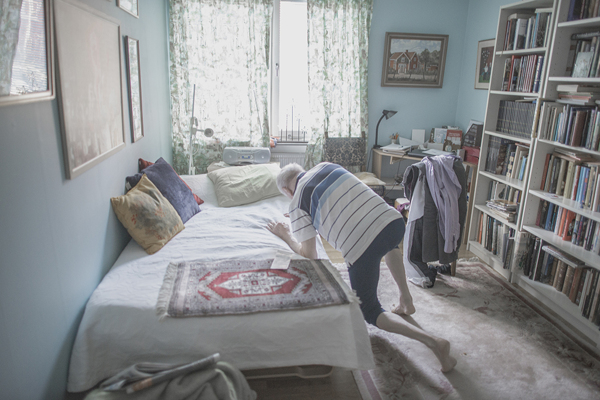