Berlin-based conceptual and multimedia artist Aram Bartholl started his project, Dead Drops, in 2010 during his time as an artist in residence at EYEBEAM, an art and technology centre in NYC.

Dead Drops is essentially an offline peer-to-peer network in which participants are encouraged to upload and download files from strangers in an open network. A USB drive is cemented into some public space—the side of a building, a street corner, the underside of a park bench—and people are free to utilize it however they’d like. Everyone is welcome to take part, either by installing their own Dead Drop or by uploading/downloading shareable content. A comprehensive list of Dead Drop spaces can be found here, as well as a handy video guide Aram created to guide novice Dead Droppers into creating their first peer-to-peer network drive.

As a unique take on the discussion about file sharing and the controversy around copyrighted downloads, Aram’s project grabbed me immediately after reading about it. There’s also something about the idea of sharing personal files with strangers that resonates with the intimacy of human connection, and the way digital media can either make those connections easier or more troublesome. 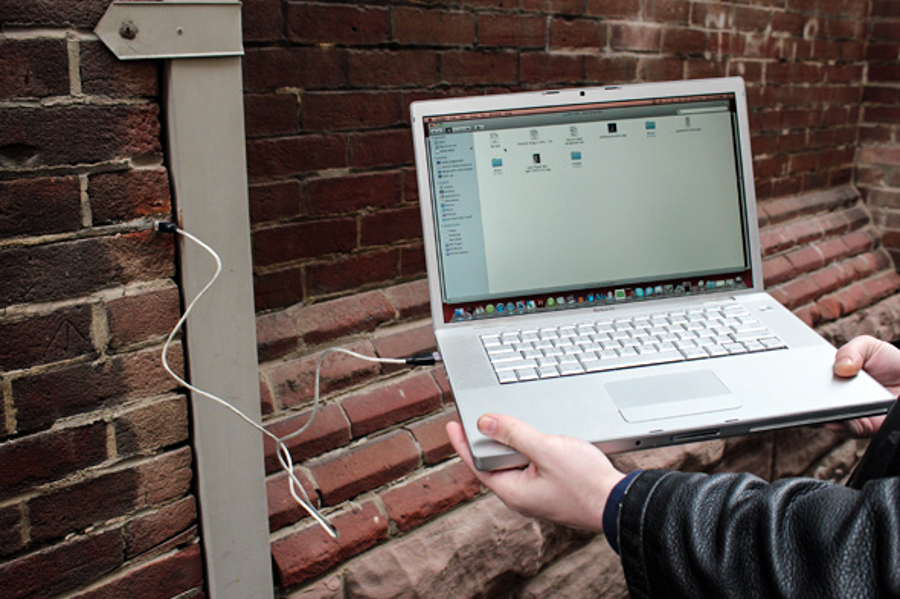 Aram is well-known for his artistic interest in examining the relationship between the digital and physical world, taking elements from one and outputting them into the other.

I spoke with Aram about Dead Drops, asking a few questions regarding what he feels is most important about his project and the subject of criminalization when it comes to free downloads. He replied via recorded video, something which I found extremely fitting in relation to his project and the type of multimedia expressions he seems to enjoy putting out into the world.

How did the idea of an offline, peer-to-peer, open network come to you?

Aram: I started this in 2010 when I was an artist in a residence at EYEBEAM in NYC. I’d done a lot of projects about offline file sharing and also about public space. I like to work in public space interventions and to take things from the online to the offline, so there’s a body of work that kind of fits into this project.

Seeing as you started this project a few years ago, how has it changed and developed over time?

There are always waves when this project is popular again. It was very popular in the beginning, in 2010 and 2011, and then slowed down and came up again. It was also popular after the Snowden revelations because it gained a different meaning. Right now it’s also very popular…I don’t know for what reason, haha. It just came up on some big blogs.

People have been making more than 1,400 Dead Drops over the past few years, and they use them for all kinds of different things, so it’s interesting to see how this project goes on. 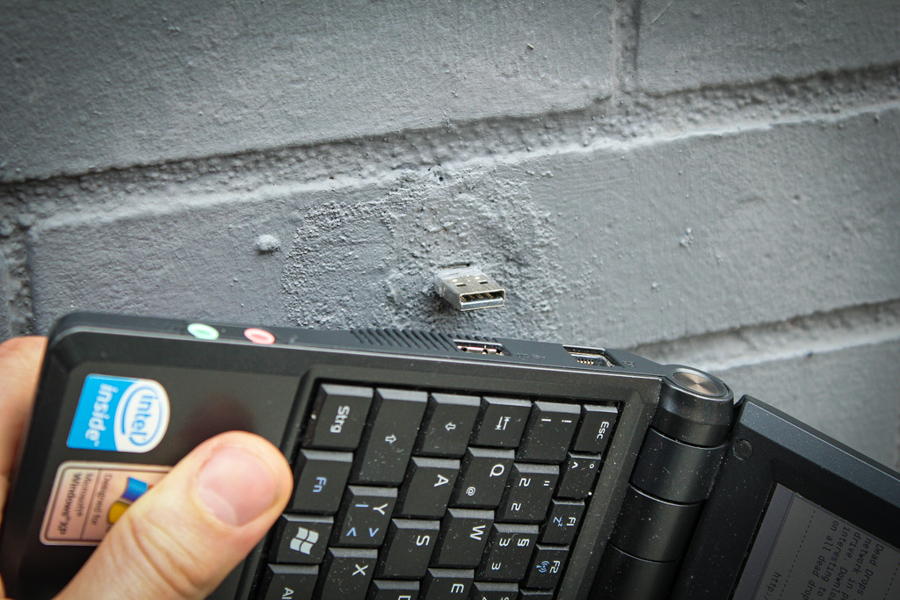 The whole idea relies heavily on the honesty of participants—really awful things can be uploaded so easily. How did you work around that? Is it a fear that has entered your mind as the project continues growing?

Of course you can upload a virus onto a Dead Drop. The thing is, we have very different expectations. When you go on the Internet, there are viruses. When I send you an email, there can be a virus in there as well. We’re supposed to have our computers protected.

Because Dead Drops are USB drives out in the city, we expect them to have dangerous things because they’re public just like we expect the Internet to have dangerous things because it’s public as well. There’s this idea of the city and evil things happening within it, and in fact those things happen all the time on the Internet—I can send evil files over the Internet and not be tracked. So its more about the awareness than the expectations we have.

What’s the weirdest thing you’ve ever seen uploaded onto a Dead Drop?

There have been many cool files of course. There was one of a couple searching down a hill in Switzerland for like fifteen minutes and they were going down a mountain, and this was very funny to see filmed from their perspective. Sometimes it’s just the context of the files and which files are grouped together. I often ask people to put their own art on there and images they like.

Have you noticed an influx of interest in the way people treat the idea of Dead Drops? What societal impact have you seen it take?

As mentioned in the beginning, lots of people have done all kinds of spin-offs and have used [Dead Drops] for their own projects like releasing music, doing a poetry festival, doing an exhibition. People have used it in many different ways, which is very pleasing to see; it’s a very open project and everybody is invited to make a Dead Drop. It’s also very easy to make—you only need to get a USB drive for six euros and then cement it into a wall. It’s something that is very simple to do.

I think it has raised awareness for people, and after the Snowden revelations it gained a new meaning. People are more aware about surveillance now, about how data is collected and about anonymity on the Internet. 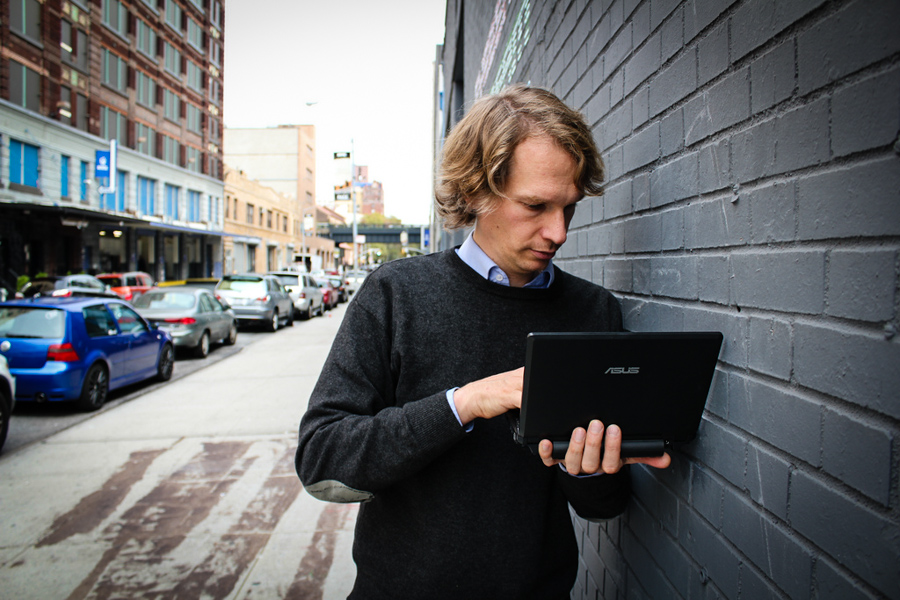 There’s definitely a very liberating, “free information” feeling about the whole project. Do you find the idea of having free files available for whoever is interested—whether they be music, movies, or documents—important to the development of our society in the age of information?

I think it’s very important to remember and to think about what it means to have this digital world and to have Internet and computers. I can send you this video I’m recording and now you have it and I have it too, but when I have this pen, *holds up pen*, and give it to you, then you have it and I don’t have it anymore. It’s a very practical thing that we can just copy files, but of course this isn’t useful for businesses. It’s a major paradigm shift that’s happening with culture, with books and music and movies. The next thing will be 3D files. All of this happening—it is an advantage, but not everybody likes it. And obviously they’ve been making so much money, they want to keep it that way. 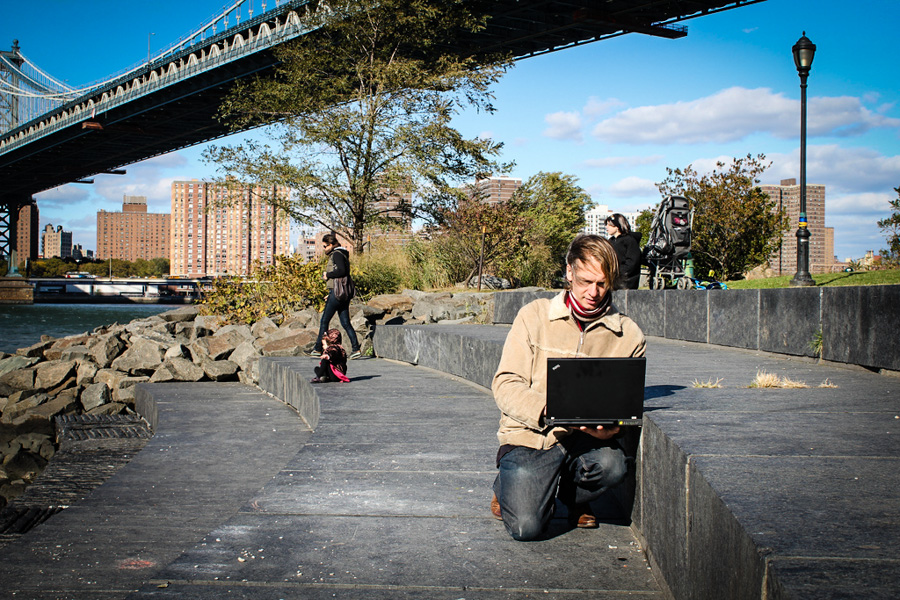 What do you think makes your project an artistic alternative to other peer-to-peer file sharing sites like Pirate Bay? How do you feel about the constant pressure to criminalize free file downloading?

Copyright is a big discussion, but it’s also just the beginning. We should also talk about copyright of medicine and vaccinations to prevent diseases, and how big pharmaceutical companies are sitting on copyrighted recipes when people in other parts of the world are dying because medicine is too expensive. The pressure is becoming bigger and bigger.

But also, people are getting more used to torrenting files. For me, Dead Drops is of course about file sharing and peer-to-peer and being untraceable. Dead Drops is the place where one spy leaves information and another spy picks up that information. But in fact, it’s also this gesture of connecting the laptop to the house… the files are cemented into the building, into the wall. The data is literally in here. The whole building becomes some sort of storage drive, and then you take your laptop into the city, and maybe it’s wet or dirty, but it’s the complete opposite of what we’re used to when we use our computers. Also the picture of the USB plug coming out of the brick wall, this sort of clash of stone and mortar combined with technology, is something that puts a spark in people’s heads and makes them think in a different way about these connections.

Pirate Bay itself isn’t so important, I’d say, but just the fact that we can copy files is an important cultural phenomenon. 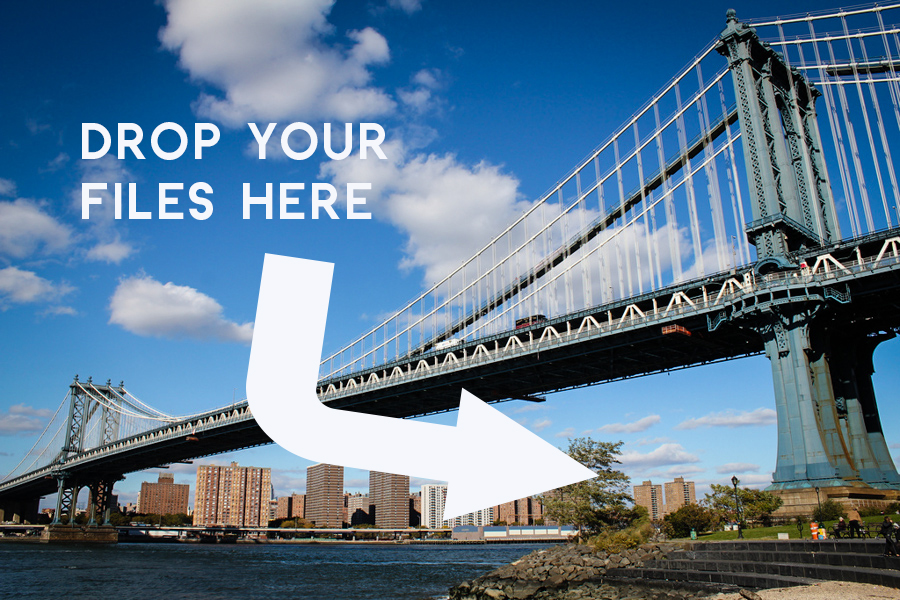 The idea of hunting for a Dead Drop reminds me fondly of geocaching when I was younger. Have you seen people make their own Dead Drop in bizarre and uncommon places? How does that add to the experience?

Yeah, of course! It is close to geocaching. While geocaching is also about finding a treasure, with Dead Drops there’s no secret as to where they are, and when you find them you find a sort of digital cache instead of a box. It certainly has the similarities there.

I think that’s also the fun part: you go outside and have to find a Dead Drop. You don’t know if it’s still there—they disappear, they break after a while, they don’t last forever—it’s a public space. You don’t know whats on there, if it has dangerous files. It has all these implications, which are totally the opposite of what we’re used to hearing. It has an adventurous point.