A new plane could be taking off in the next fifteen years that will hold up to 800 people, use ultra light and noiseless material, and—believe it or not—release no trace of carbon emissions into the atmosphere.

Oscar Vinal, the Industrial and Graphic Designer from Spain, designed this futuristic dream machine called the AWWA-QG Progress Eagle with the hope to revolutionize human flight and develop an eco-friendly alternative to carbon-producing commercial jetliners.

Hybrid, quantum solar cells are positioned on the roof, in a hexagonal pattern.

While Vinal’s earlier designs largely focused on space travel with creations like the XLDron Moon Window and the GIGA Bay & Ceres G, he recently turned to airplanes and made his first design in 2013, known as the Sky Whale.

The Sky Whale includes technology that could potentially be implemented in the next ten years, including hybrid electric engines that will “use both fuel to burn in the engine’s core, and electricity to turn the turbofan when the core is powered down,” according to Vinal’s description of the plane on Behance.

The plane is broken down into three levels, with the maximum capacity of 755 passengers. Vinal’s designs will give passengers on the top floor, equivalent to first class, the chance for full sky views while traveling.

After taking almost a year to perfect his first design of the Sky Whale, Vinal released the new and improved design called the Progress Eagle, which will be the first commercial plane in history with zero carbon emissions.

The Progress Eagle holds similar traits to Vinal’s first design, but with even further technological advances that won’t be put into practice for about 15 years.

The double arrow wings can be folded up to reduce the plane’s width at airports.

The plane will fly with six hydrogen engines, as opposed to the previous four, with an engine in the rear of the plane that will act as a wind turbine to help power the plane.

There are also solar panels coating the roof and the wings of the plane to ensure that the plane is self-sufficient.

Hydrogen fuel energy gets the plane off the ground.

Vinal describes the Progress Eagle as having “Smart and self-repairing wings, composed by carbon nanotube and carbon fibres,” as well as, “hollow endoskeleton in an ultra-lightweight beehive-shape of titanium and graphene.” These technological advances will help to create a plane that runs faster and more efficiently.

The wingspan stretches 96 metres; slightly longer than a football field, with the option to fold parts of the wings to meet airport regulations around the world.

Once in the air, self-generating power systems propel the aircraft. 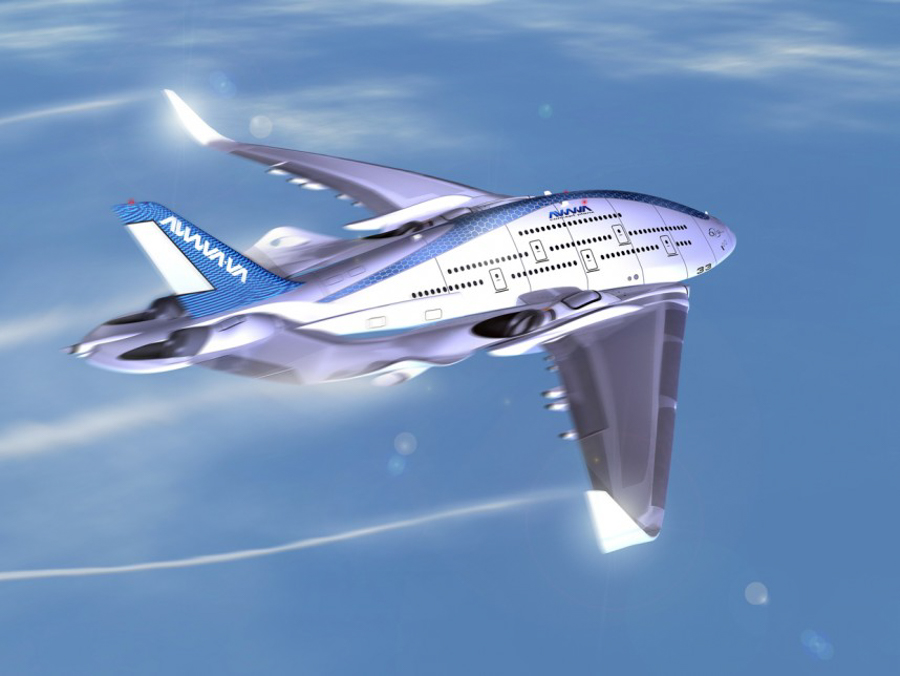 Admittedly, only 40 per cent of the necessary technology is currently available to build the plane, but Vinal still hopes to see the Progress Eagle in the sky by the year 2030.

Inside the plane, Vinal used a three-story design, but created new seating allowing 800 passengers, holding 34 per cent more people than the Sky Whale. There’s also room for the possibility of restaurants and stores to be built on the plane.

Vinal’s design will revolutionize the travel industry by embracing luxury and sustainability, simultaneously giving jet-setters an eco-friendly means to travel the world in style.