In 1988, Greg Taylor was a bike courier pedalling nervously towards the house owned by his girlfriend’s boss, clad in a cheap-checkered-necktie. He had been invited as her “plus one” to The Upper Canada Brewing Company’s employee dinner and as he counted the cracks in the asphalt, he imagined a long ebony banquet table surrounded by black suits and thinning grey hair.  With sweaty palms and a neck like a kinked garden-hose, he stepped on to the porch ready to succumb to an evening of policing his manners and pretending to laugh at middle-aged dry humour. To his surprise, the door was already open.

There were firecrackers being lit out back, cigarettes were being smoked inside and people danced with foaming bottlenecks as someone attempted to sweep  up broken glass. It all seemed very strange— like the employees actually liked one another.

It was there that Greg Taylor first met Frank Heaps, the owner of the house and The Upper Canada Brewing Company, who would give him a piece of drunken insight that would forever change the way he saw business.

“He said that he thought that people should feel included and respected and that they should be excited to come to work,” recalls Taylor. 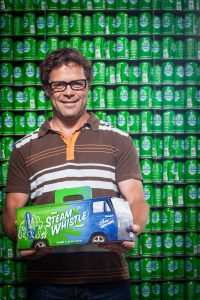 Following the encounter with Heaps, Taylor began working for The Upper Canada Brewing Company until 1998, when a larger beer conglomerate bought out the factory, gutting the production line and laying-off most of its workers.  Taylor was hired on a six-month contract to consolidate the sales force and during that time he witnessed a significant change in the once-vibrant personality of the same brew-house he had worked in for nearly ten years. The environment had been poisoned.

“ In that period of time it just became apparent to me that these guys treated their employees with zero respect. The owner had a separate office in the building and if you wanted to see him, you had to get permission and set up a meeting and of course he is not going to meet you.” Taylor recalls.

“Very quickly things started to go down hill.  I saw a maintenance guy putting a company drill in the back of his trunk. I was seeing a guy who loved working for Upper Canada turn on his own business and start stealing. The moral is that if workers hate where they work, they may be the very ones who are tearing your business apart.” 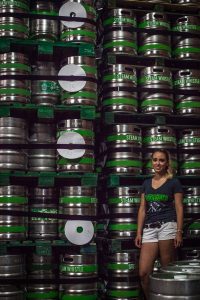 It was not long after, that Taylor too found himself jobless. After a brief stint in the white label ATM industry, Taylor, Cameron Heaps and Greg Cromwell took a much-needed canoe trip to Algonquin Park. It was around a campfire in a rush of beer-induced creativity that the idea for “Three Fired Guys Brewery” was born.

Now the founders of Steam Whistle Brewing, one of Canada’s most successful craft breweries, it’s plain to see that Frank’s wisdom has never been forgotten.

Stepping into their office, I first met Nancy, The Director of First Impressions.  Instead of cubicles and harsh florescent light, the room was open concept with exposed brick and a window framing the Toronto skyline. The only collar in the building was a striped golf shirt and seniority was pretty well camouflaged by casual wear.

“When you go into our office, there is no hierarchy you can see from an optical perspective. Everyone can meet me or our other co-founder, Cam. We’re in the same space as everyone else,” says Taylor.

The walls were a collage of canvases donated by local talent. Actually, the brewery regularly lends its space to local artists for free gallery shows in exchange for art donations to decorate the walls.

The Steam Whistle brewery is located in the shadow of the Rogers Centre in Toronto’s historical Roundhouse. In fact, destiny had sung in the founders’ ears when Taylor and Heaps found an Upper Canada beer bottle inside The Roundhouse when they toured the building for potential lease.

Previously, the building was a station for the Canadian Pacific Railway.

“We just felt that the ideas of equality and the age of innocence were appropriate because the technology in our lives is so prevalent these days and it’s easy to lose yourself in it” says Taylor.

With tradition playing a major part in the way beer drinkers interpret a brand, the vintage bottles and classic cars remind beer lovers that quality will forever trump quantity.

Rather than overwhelm consumers with a platter of mediocrity, Steam Whistle brews only one style of beer, a Bavarian-style pilsner. So goes the Steam Whistle slogan “Do one thing…really, really well.”

Although pilsners account for roughly 60% of all the beer consumed in Canada, not all pilsners are created equal. The brew is 100% GMO free and composed of only four ingredients.  So committed to beer is Marek Mikunda, the Czech Brew Master, that he requested a bed at the Steam Whistle Roundhouse so he could stay over one night a week. His reasoning: “The beer never sleeps”.

Matt Weed, The Steam Whistle Special Events Manager and founder of Fake Arts Records, says there is an intrinsic relationship between the grassroots movements of craft beer and independent music.  He runs a series called Unsigned out of the Steam Whistle Event Space, which provides a platform for up-and-coming talent on the Canadian indie-music scene.

“One thing I’ve always loved about working on the live side of music is that beer and a live show are things that you cannot download.” Says Weed.

The Unsigned concert series has helped kick-start the careers of Canadian indie powerhouses like the The Darcys, Austra, and The Rural Alberta Advantage. 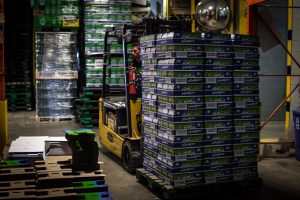 There are few companies today whose passion for people supersedes their passion for profit. This business model incorporates ideas long forgotten in the cravings of capitalism: stewardship, community support and employee appreciation. They are a good example of a company that understands the words consumer and community must be synonymous for responsible business in the 21st century.

But Founder, Greg Taylor says that the key to Steam Whistle’s success was in realizing that the hands of a clock do not turn by a single cog.

“The story I’m telling you today, these ideas are not all mine. I’m not some brilliant dude who said I’ve got all the answers. These ideas came from 25 years of working with people and forging my own image of how it could be done.  It certainly couldn’t have been done without them.”