“For about a month people see some tension. There is a state of unrest. Everyone knows that something is going on.”

In the small village of Vrontados the month of March is no more than a grand preparation for the midnight before Easter Sunday. The Greek town hosts a local traditional event called ‘Rouketopolemos’ aka ‘Rocket-War’. And it’s literally just that—a rocket war.

If you were to be at Vrontados during that night you would see thousands of homemade rockets being shot. But they aren’t just shot across any body of water. They are shot overtop of the village from two opposing sides—better yet—two opposing Orthodox churches. 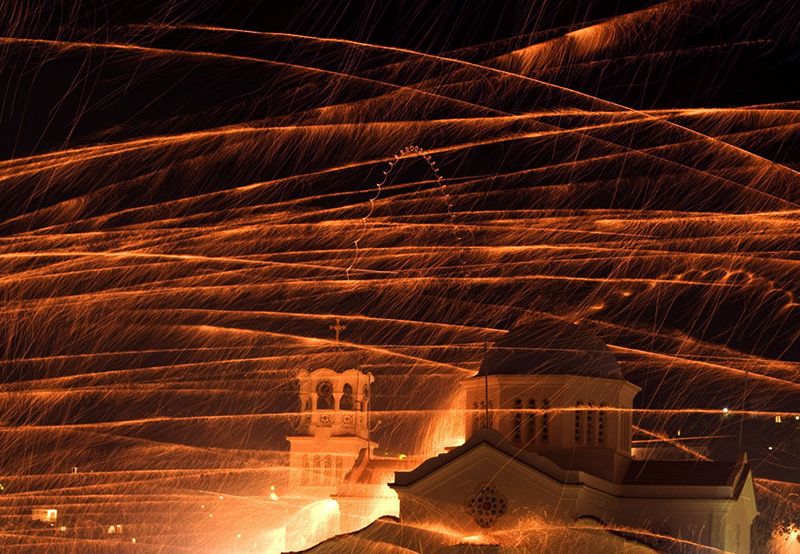 The reason for the battle is to celebrate the resurrection of Christ with a mock war. During the war outside mass is being observed inside. The villagers stop everything they do and participate in either of the two things.

And the participants have loads of fun too. The goal is to see who can hit the opposing churches bell tower the most times. The day after the event people count the amount of hits on the bell tower to determine the winner—but like any other battle each participant claims a win.

No one knows exactly how the tradition began but it has been said that “the tradition started over 200 years ago to keep the Ottomans at bay. The villagers re-enact the ‘War to Keep the Peace’ to this day.”

So to sum up, it looks like one of the coolest events ever.

Watch it all go down here: