Getting on board with the tiny house movement doesn’t mean going off the grid; in fact, Intel just unveiled their latest creation – combining the simplicity of tiny houses with the blossoming technology of today.

The 210-square foot home has a kitchen and living room, along with a bathroom and study area that conceals a bed right underneath.

Intel’s Smart Tiny House is not only stylish and modern, but it’s packed with all of the gizmos and gadgets you could ever dream of. The features include a facial recognition system for opening the door, sensors that detect household problems and alert you, and an app that basically acts as a remote control, allowing you to control the house from anywhere in the world with a swipe of your finger.

According to CNET, all of your home devices can be controlled through one app. This includes lighting, appliances and heating. It also lets you see who is entering the house. The front door has a hidden camera that is programmed to recognize trusted faces and open the door, which means you’ll never have to worry about losing your keys again. The app can also show you the faces of unrecognized visitors. If you are not home, and the camera detects an unfamiliar face, the app will give you a prompt with different options including, calling an emergency number or granting them access to the property. This means you can also grant friends or family access to your home, with the click of a button, if you get held up at work.

Features include a facial recognition system for opening the door, sensors that detect household problems and alert you, and an app that allows you to control the house from anywhere.

If a leak is detected in one of the pipes, the taps will shut off and a different prompt will pop up on the app notifying you of the situation, and providing you with a list of responses, such as calling a plumber.

The house is equipped with a microphone, which lets you control several devices with voice command. You can program the house to respond to certain commands, so that when you say it, it does the correlated action. For example, you can make a command that is said when leaving the house, and all doors will automatically lock and lights will turn off upon hearing it. 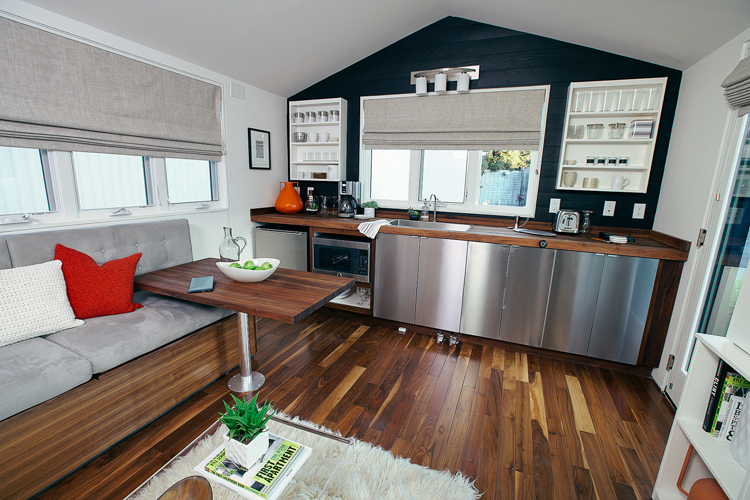 The house is currently located in San Francisco, but will travel around to be used as a testing model over the next 12-18 months.