Who says that humans and animals can’t become family?

Every year, Jinjing the penguin treks thousands of miles to be with the man who saved his life.

It was in 2011 that retired bricklayer João Pereira de Souza first found the bird, soaked in oil, laying by his beach house. After moving Jinjing into the shade and cleaning him up, de Souza force fed him fish and took him to the beach. He expected the animal to swim away, but as he told The Wall Street Journal, Jinjing didn’t want to leave.

“He took a drink of water and then came back onto the beach. So I gave him three more sardines and that was it, he never left me again.” Jinjing’s name is a term of compliment in parts of South America, and de Souza says almost all the inhabitants on the remote fishing island of Provetá in southeast Brazil know the tuxedo-clad bird. “He’s the village mascot,” says Carlos Eduardo Arantes, the community administrator.

Local residents say that Jinjing will spend weeks away from the island, only to show up randomly outside de Souza’s house. When Jinjing returns, he’s elated to see de Souza. “He comes up to my neck and hoots,” de Souza tells The Wall Street Journal. During Jinjing’s visits, the duo goes for long walks on the beach, swim together in the surf and spend nights under the stars, conversing in Penguinese.

When he first returned, de Souza tried to send him back, putting him on a boat headed to another beach. The boat’s captain tossed him overboard miles away, but Jinjing beat the boat back to the island. “I never saw a critter get so attached,” de Souza tells The Wall Street Journal. “You can let him go wherever you want, but he’ll come right back.”

Typically, Jinjing leaves for a longer time during the month of February, something de Souza told The Wall Street Journal he always attributed to a desire to “line up a girlfriend” for Brazilian Carnival. But ironically, researches say there might be a more romantic reason for Jinjing’s loyalty towards de Souza.

Magellanic penguins like Jinjing often migrate thousands of miles between breeding colonies and feeding grounds. They typically mate in September, laying eggs and rearing chicks between December and February.

Dyan deNapoli is a veterinary nurse that used to take care of penguins at Boston’s New England Aquarium. She says that since Jinjing visits de Souza during breeding season, “it’s possible that he has redirected his natural instinct to mate towards [him].” She says Jinjing’s constant nibbling could be “allopreening,” a courtship behaviour among certain birds.

“He’s jealous for me,” de Souza tells The Wall Street Journal, as Jinjing eyes a visiting reporter curiously. “He doesn’t let any dog or cat near me or else he goes after them and pecks.” Later, when a neighbourhood dog approaches, Jinjing lunges towards it ferociously. The dog scatters quickly. Protecting one’s mate is a common trait in Magellanic penguins, deNapoli explains.

De Souza’s daughter, Mery Alves de Souza, tells The Wall Street Journal that her father fusses so much about Jinjing, he often neglects visiting his own children six hours away in Rio De Janeiro. “We call him and tell him to come visit and he says, ‘OK, OK.’ But then he doesn’t.” She says that JingJing is like a son to her father.

Magellanic penguins live roughly 20 years on average, so this unique relationship will likely last a while. 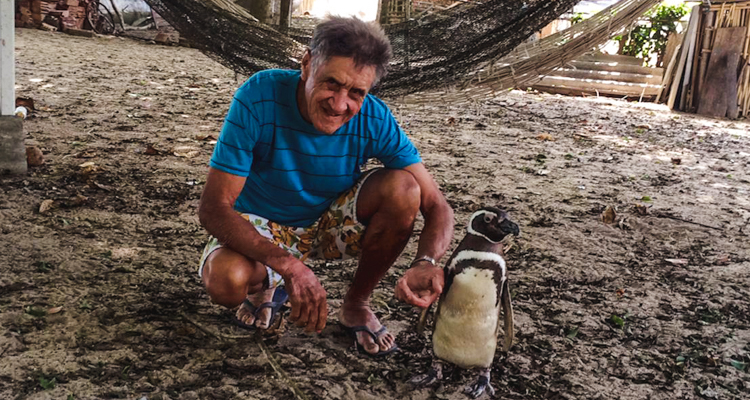