It was quarter to 10 on a Wednesday night when I found myself sitting alone in a booth at the back of a Golden Griddle. The lights were dimmed to a comforting glow and the only other person in the – dare I say fine dining establishment – was the Filipino man who sat me to my table. He was drinking coffee and eating a waffle loaded with whipped cream and maple syrup. He was staring at me. Perhaps he was wondering what the hell another person would be doing at the Golden Griddle on College Street at this time of night. But more than likely he was curious by the fact that I kept repeating “Testing, testing. I am testing my microphone. Microphono, microphini, la, la, la. I am testing, testing…”

I have worked in the service industry for over two years. Since working in restaurants I have found that the service industry is an entire culture in itself. A world most of the general public doesn’t seem to be aware of at all. The work is hard, the hours are long, and the bullshit you have to deal with reaches an all time high. During one of my usual dinner shifts when the restaurant was at full capacity and the dirty dishes were piling up in the back, I heard the chef of my kitchen say something quite interesting.

While angrily garnishing a rainbow trout that was sent back from a table the chef confessed to me that he wished “people knew what happens in restaurants. They would gain a new respect for the staff and realize all the crap we have to deal with. They would have a completely different attitude when eating out at an establishment.” He laughed to himself, “Although half of me just wishes they knew the crazy stories that happen, you know? Like, the first time I ever tried cocaine was during a shift in the back of a kitchen. I’ll tell you man, I have never worked so fast during a shift in my entire life!”

He was right. From finding bottles hidden in staff washrooms filled with spiced rum to catching people leaving hostess closets with messy hair and untucked shirts, I have run into quite a few stories myself. I have witnessed some terrifying guests, but no one that could match the terror of Gordon Ramsay. I have witnessed coworker relationships, however none that melted my heart like Julia Child’s. The only Oscar-winning worthy story I had heard of was the tale of The Blue Man, and I hadn’t even heard the story.

Since the chef of the restaurant I worked at was unwilling to spill the beans for fear of putting his current job in jeopardy, I had to find someone else. Someone who was willing to take off the apron and dive into the juicy steak of what we know to be the secret life of the service industry.

I have a friend who had been working in the service industry for fifteen years. They have worked every position from washing dishes, prepping salads, and serving tables. Currently, they hold the role of assistant general manager at a restaurant in downtown Toronto. This service professional has worked in some very prestigious restaurants, some of the most notable being The Ritz-Carlton, as well as working for Mark McEwan in Yorkville. Cooking in high-end establishments for high profile clients, this professional was not about to meet me in any restaurant where they could be easily recognized. And this my friends is how I found myself in the back of a twenty-four hour Golden Griddle, ordering two Caesars from a Filipino man, and greeting an old friend. We sat down, took a sip of our vodka and Clamato juice, and began our interview.

It didn’t take long for them to recall memories of guests being difficult. “I have had people send their eggs back to the kitchen because they didn’t like the way they were shaped. The way they were shaped!” I wondered how an egg is supposed to be shaped. Round? I wasn’t sure. “Not to name any names but Nicholas Cage clearly has a very specific idea of what his eggs are supposed to be shaped like. He sent his back seven times. The bastard.”

After what seemed to be a cathartic release of unenjoyable memories with guests, I asked how this plays into the culture of the serving industry.

“You’ll find a certain camaraderie that comes when working in a restaurant. You feel as though you are apart of a big family. After a busy night with ridiculous guests the staff tends to bond together, and that can lead to some very hard partying. You have to be self-aware and have a pretty good head on your shoulders to survive in this industry. I remember once, when I started out working as a busser, seeing a server crush oxycontin and snort it off the dining room table after the restaurant had closed. I guess it was a really tough shift. There is a level of responsibility and maturity you need to have to work in this industry, otherwise it can consume you. One thing that the general public doesn’t really understand is how much servers can actually make. If you look at a casual-fine dining restaurant that is in a busy location, for example Jack Astor’s, a server in six months can make upwards of $80,000 in cash. In the year I was serving tables I made $87,000. And what do I have to show for it? Absolutely nothing because I put it up my nose. That’s not to say we don’t work for it though. You ask for the ridiculous stories that happen in the service industry, but what you don’t realize is that most of the craziness comes from the guests.”

There is a level of responsibility and maturity you need to have to work in this industry, otherwise it can consume you.

I remember always hearing about the blue man story. It was one of those famous tales that everyone knew of, but nobody had actually heard it themselves, and I was about to hear it straight from the lion’s mouth. “You want to hear the blue man story don’t you?” I smiled.

“Alright. It was only two weeks after we had opened the restaurant and there was a man that had come in with a wheelchair covered in bags. He said he was waiting for two other people and that he needed a table for three upstairs. When I offered to put his wheelchair in coat check he refused and insisted that he needed his chair with all his bags beside him. I mean you try to give people the benefit of the doubt and make up some logical reason why this man would possibly need this fucking chair. I couldn’t think of one, yet I still got another manager to carry that contraption all the way up the stairs. I then left the man to his server and went back to my duties.

After another fifteen minutes had passed, his two other guests had yet to arrive. I went upstairs a third time to see if he had heard anything from his friends but he was gone. I couldn’t find him anywhere. Without thinking to check the bathroom I began to tell a staff member about the situation only to turn around and see a guest walking down the stairs. At my initial look, the guest appeared to be a black gentleman wearing a Maple Leafs jersey. I thought to myself that I didn’t remember seeing anyone wearing a Maple Leafs jersey in the restaurant, only to then have him walk closer so I could get a better look. This man wasn’t black – he was blue. The man had literally painted himself blue from head to toe. The entire dining room had a perfect view of him and all of the guests eating had a “what the fuck is happening?” facial expression. Obviously this was the last straw and we kicked him out. The servers had a laugh and the guests had a show, the fun was over.

I went upstairs to reset the table and to restock the bathrooms. When I entered the bathrooms everything was covered. Everything. He had apparently used blue hair dye to cover his skin. He had it smeared all over the cement floors, across the mirrors, on all the urinals, everywhere. It took us forever to clean that mess up. That damn blue man. We still don’t know how he managed to pull that off. I’m telling you the paint was everywhere. And that is the famous blue man story. You finally heard it. Just a week after that guy, a lady shit herself at table twenty-four. This industry never gets boring.”

“Is it worth it? Working in this industry?”

“Absolutely, especially if you love what you do. Although no one knows about how difficult it can be to work in the service industry, there is something to be said about having a guest come into your restaurant after a terrible day only to leave smiling because your service was so great. Being able to have that kind of an impact on people outweighs having eggs sent back to the kitchen a million times, outweighs any stresses of drug abuse, and it especially outweighs any crazy blue man.”

If people knew what happens in restaurants they would gain a new respect for the staff and have a completely different attitude when eating out at an establishment. 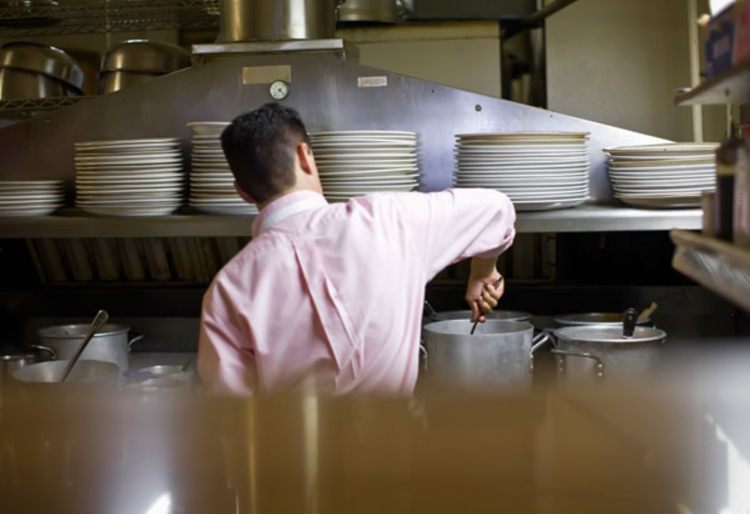