Within the commotion of a fast-paced everyday life, taxi rides feel like a small blimp on the radar. They are simply a means of functionality to get from one place to another. But what if they could be something more?

The innovative project, called Taxi Fabric is trying to do just that. They are taking young designers and giving them a space to show off their talent through the medium of taxi interiors. In the process they are changing the landscape of taxicabs and the future of design in India.

So far the project has surpassed its Kickstarter goal of £8,000, finishing with £11,089. With that money they have launched 11 completed taxis and plan to have another eight done by the end of the year.

The 11 finished designs range in variety from a Sistine Chapel that reflects the nation’s fight for independence, to a jungle book design that shows interactions between the cities iconic landmarks, like the Gateway of India and the Arabian Sea. All of the designs are a reflection of the colourful culture of Mumbai and the drivers’ personalities. 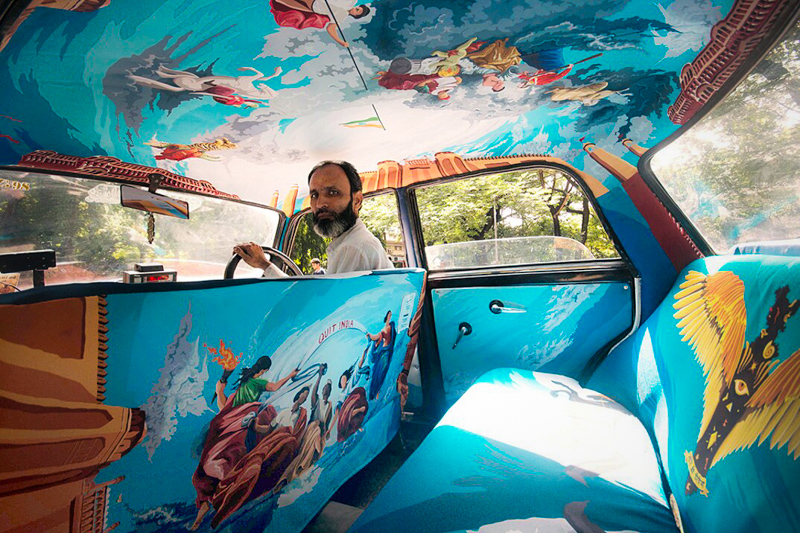 Taxis themselves have become an iconic piece of the city’s culture with about 55,000 of them on the road, making it the most convenient form of transportation to a population of 21 million people.

That’s a lot of taxis for a lot of people. According to the project’s campaign video, drivers across the city compete for customers by decorating the outside of their cabs with flashy lights and hand-painted designs.

One of the drivers interviewed said, “It is like how a man decorates his home, in every way, so that it looks good.”

While they put all of this effort into decorating the exterior of their taxis they choose to buy the cheapest interior fabric because for them it only performs one function.

There is a common misconception, amongst the older generation of Indian people, that design, or graphic design isn’t a proper profession. Parents often worry when their children choose to pursue a career path in the arts because it is not largely understood. Due to a lack of understanding, designers often struggle to find a place to show off their skill and challenge the misconception.

Taxi Fabric is proving that design plays an important role in the world at large and especially in the world of business and science.

Since launching, the taxi drivers have reported that their customers are engaging with them more and they are receiving more fares because their taxis stand out in a way that others don’t.

The drivers aren’t the only ones reaping the rewards of the design project – some of the designers have been contacted by people who have seen their work, and want to work with them further.