Among the thick of a forest lies a clearing, on the Fringe of Lakewood, New Jersey, over a hundred people have decided to step outside the confines of social norms and build makeshift homes in what they call “Tent City”. It was formed several years ago and its controversy has split the town in two ever since.

“It was a difficult situation, many local residents wished to see the compound closed and the occupants relocated. Yet this is a large part of the problem, many of them have already been kicked out of public housing due to their continued use of drugs and untreated mental illnesses. On the other side, the people holding protest signs on the main road, advocating letting them stay, were blind to the fact that these people needed genuine psychological help. They would assert of the government’s “War On The Poor”, but never step inside the tents themselves. If they had they would have known that people were smoking crack and shooting heroin right behind them” says photojournalist Chris Occhicone.

For six months he shadowed the group of addicts who obtain food and clothing through donations, freeing up the cash they obtain through sympathetic relatives, social security checks, and disability payments to fund their drug and alcohol needs.

It is easy to judge, but much harder to understand the struggle for escape or relief. Addiction has both biological and psychological roots. The more fortunate person’s addiction to coffee or cigarettes differs only by the degree in which it consumes the addict’s life, but in the end, nearly everyone is addicted to something, seeking gratification from the outside in.

4 April 2014 – One of several fires in the past week has destroyed a tent. Some camp residents have died in fires over the past few years.

4 April  2014 – Various monthly government subsidies have come through for many in the camp, and the group has purchased several hundred dollars of crack. Dawn smokes while John and Bear wait their turn.

8 March 2014 – Inside Tent City’s chapel, “Uncle Mike” dances salsa with Eve. Uncle Mike says he lives in Tent City by choice. He says he is a reformed gang member who found God. He says he may be a prophet.

16 March 2014 –  Samantha is upset after Andrew became jealous and aggressive with her for talking about her ex-husband and her five children, who had been taken away by social services. 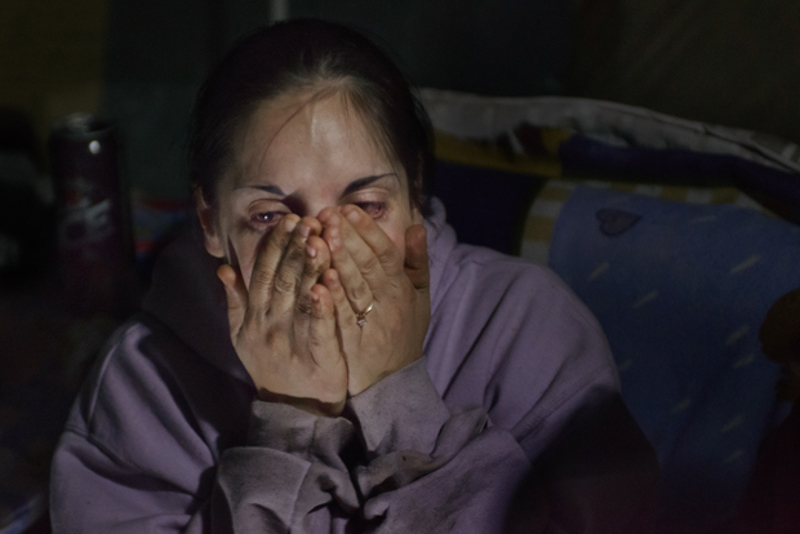 16 March 2014 – Andrew, diagnosed as paranoid and schizophrenic, and his pregnant fiancée Samantha in bed in their tent after an argument.

22 March 2014 – Eve and her husband Chris argue. She accuses him of having sexual relations with a male friend. He denies it. He eventually would run off with the friend in question, leaving a pregnant Eve behind.

29 March 2014 – Andrew, who is diagnosed with paranoia and schizophrenia and his pregnant fiancée Samantha, who is an alcoholic, use their smart phone to look up the effects their condition may have on their unborn child.

4 April 2014 – Chris earned $100 the previous day. To celebrate, Eve will buy some good booze. Chris cannot purchase it himself as he is not yet 21.