“Before you talk to me,” he says. “Forget everything you know.”

I’m not sure how to do that.

An empty mind is conducive to awareness of infinite wisdom. I was standing at Wellesley and Church getting a spirituality lesson from a 62-year-old hotdog vendor/soul healer who calls himself a wizard and claims access another dimension, where love, compassion and humility are the components of reality. He can tap into an eternal reservoir of power and overcome all weakness and any problem, according to his business card.

Standing over six feet with a hefty build and a thick Balkan accent, Veselin Valchev, who goes by Errosoph, stations his hotdog cart on the southwest corner of this busy downtown intersection – the flow of humanity in all directions, without pause. 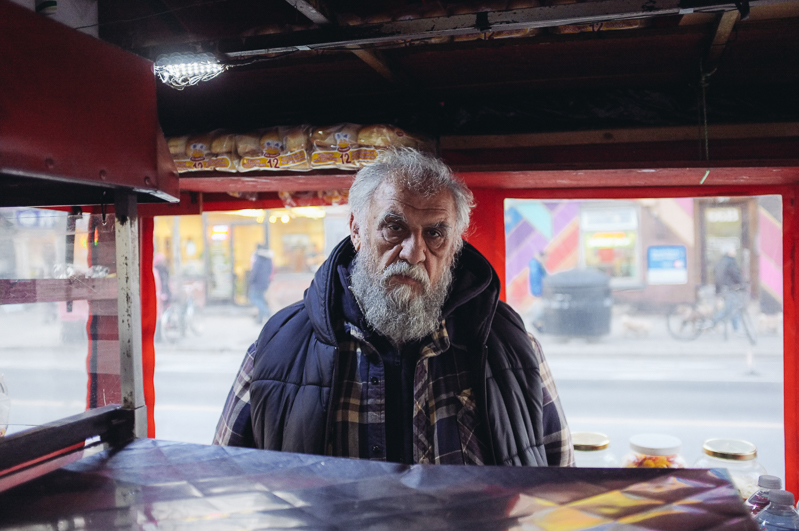 This is my version of reality; people, jobs, social life, public transportation, pizza, LCBO bags, homelessness, bicycles, cellphones, fashion, the Leafs, advertisements, falafel and the most important thread through it all; money.

Erossoph’s story begins in Bulgaria. Born to parents who wanted to see him go to school, succeed and earn an easier life, he had trouble doing what he was supposed to do. He wasn’t insolent. He was confused.

“I did not understand this world.” he says.

He couldn’t fit in at school and rejected his education. He received regular beatings from teachers and abuse from peers. He found solace in nature, spending time in parks and the woods with the birds and flowers.

Erossoph managed to graduate school and from there, he worked odd jobs, driving taxi, and working as a goldsmith. He was never happy or fulfilled and never felt as if he was meant for life in this world.

He turned to alcohol, sex and partying to escape reality. He got married when he was 32 and later had a daughter. He always had people around but loneliness never left him.

In 1990, the communist government of Bulgaria fell and the borders opened. Convinced it was his people that didn’t know how to live, he immigrated to Canada. But his life carried on as usual, until a failed business venture precipitated a personal revolution. In 2005, he took a loan and opened a restaurant called Victoriana. He had to shut down within the year.

His depression and loneliness merged with the grief and worry of a financial disaster. His depression worsened and he became suicidal. In his misery and desperation, he had an epiphany.

“Suffering is the root of knowledge,” he says.

This suffering awakened him to a new philosophy that set him on a spiritual path.

I am writing about Erossoph, because his van caught my attention one morning as I biked past. This is what it said:

First, I was dying to finish my high school and start college

And then I was dying to finish college and start working

Then I was dying to marry and have children

And then I was dying for my children

So I could go back to work

But then I was dying to retire

And now I am dying…

And suddenly I realized

I forgot to live

This familiar tale of deathbed regret gripped me because this is a wisdom that stands in stark contrast to the fast-paced competitive lifestyle of young adulthood. We know that to have a successful career, we can seldom be idle. Our eyes tend to be fixed forward and life moves fast. No time for the present.

We all want to be somebody, someday. But is it rational to focus all our energy on future goals when life is so short? We’re taught that persistent hard work is the most virtuous trait we can embody, but the words on that van made me wonder if it was worth it and if career success and life success were fundamentally opposed.

According to Errosoph this mindset occurs because our brains lie to us, filling us with visions of the past and future. It obscures our sight of the present, of who and what we are.

So, how to be and just be? That is the question.

Errosoph’s focus on the here and now, allowed him to finally see clearly. He had to take another mortgage on the house not to lose it. But he thought about how he had food in the fridge, a family and many don’t have either. As unfortunate a circumstance he found himself in, he suddenly felt a desire to do something for someone less fortunate.

He spent $50, made 100 ham and mayo sandwiches and went to the Sherbourne and Queen Salvation Army to hand them out.

“At that moment, I start to feel some aliveness in me. I’m happy,” he says. “After this depression, after this financial loss, happiness, I am alive. I started to smile.”

He repeated this action again and again. He says even now, if someone comes to his hotdog cart and doesn’t have money, he’ll give them a hotdog. Only by feeding others can he be full.

He found others on a similar path and followed their lead. He felt himself become a part of an infinite consciousness, coming to believe that animals, plants, and people, all life, are connected. Our apparent separateness is an illusion. Allowing our perspective to breach that gap is why we are here, the meaning of life. Giving to others when he had nothing was the key.

His problems were rooted in a lack of money. But money exists in the physical realm, an illusory projection of our consciousness according to Erossoph. The love, empathy and humility he used to reach out to another human being, was real. By his standards, he was not poor.

His beliefs sound like Buddhism, but he says he’s not a Buddhist. He finds inspiration in all prophets and religions.

“People think I’m crazy, then they see that my life is in order and they [are] confused.” he says, laughing.

It’s true. He has a house in Scarborough with a well-groomed back yard and striking, colourful garden. He’s still married and his daughter is now 14. He’s been running the hotdog stand in the same spot for 20 years.

The transformation of human consciousness is no longer a luxury, so to speak, available to only a few isolated individuals, but a necessity if human kind is not to destroy itself. – Eckhart Tolle (posted on the side of the hotdog stand)

Enlightenment to the interconnectedness of life is crucial now more than ever says Errosoph. People need to wake up. We’re close to collective suicide.

“We have to live naturally, not to try to control nature, to live under its control because, nature is not created by man. And now his influence has started to change nature. Which means we have to stop that. Every day it’s increasing.” he says.

It could be argued that our hesitancy to act on climate change is rooted in the fact that to stop burning fossil fuels we’ll have to quit the hyper consumption that is fueling it and is our way of life. But would we pollute the earth and build highly sophisticated weapons systems to kill each other, if we truly believed we were one?

Errosoph is aware that he sounds crazy. He says so constantly. He said to be enlightened you first have to lose your mind.

Is Erossop’s way of life inferior? We are constantly fixated on the greener grass. Sex, money, less debt, grades, scholarships, internships, more sex – whatever we have, we want more. Wherever we’re at, we’re preoccupied with the next step. But if we are always reaching for the next rung, what are we missing in-between?

Get a job, money, get married, have kids, get more money, stress, watch kids fuck up like you did, more stress, more debt, retirement, now chill out, you get to die soon.

Maybe it’s just young adulthood with its uncertainty, self-focus and obsession with goals. We lack the maturity to form a proper identity and maybe that’s why it’s hard to feel a true purpose. I doubt I’ll ever attain access to infinite knowledge, but maybe the knowledge to make choices that will prevent me from being wrinkled and grey, kicking myself for not appreciating my time is all I really need.