The frost on the windshield had finally cleared when the car ahead stopped at an overpass on the edge of Greektown. A hand reached out through the driver’s window and offered a coat to the young man who stood on the side of the road with a soggy cardboard sign. As I wiped away at the fog I could see a sticker on the frozen bumper that read: “CARSON 2016”.

Despite his hometown advantage Ben Carson chose to skip the evening’s debate just a few blocks away at Detroit’s Fox Theatre.  Whether he had finally woken up from an elaborate fit of sleepwalking or realized that his chances of making it to finale night on Donald Trump’s latest reality show had been bleak from the start, the next day Ben was out of the race for good. And just in time to dodge some major bullets.

Everything was up for debate in Detroit. From a real issue or two, to the size of Trump’s junk and that booger Ted Cruz might have eaten mid speech…

Woodward Ave. had been hidden away beneath the snow and left to police cruisers and pedestrians. Vacant streets are not an unfamiliar sight in Detroit, but a fully lit marquee at the Fox sparkling in red white and blue against the snow covered streets was something new. It promised the, “finest entertainment” and that’s exactly what it delivered behind closed doors.

On the morning of the debate the Detroit Free Press reported in outrage at the severely restricted access to the event. The Michigan Republican Party received over 20,000 requests for the 400 tickets it had available, but reserved only 50 for the public. The rest were handed to elected officials and other big names in the party.

Hundreds of people had gathered outside the Fox shouting, “let us in or shut it down!” They carried signs in opposition to Trump, in support of Bernie Sanders, demanding higher wages, an end to police brutality, and to drilling for oil in a local church yard. 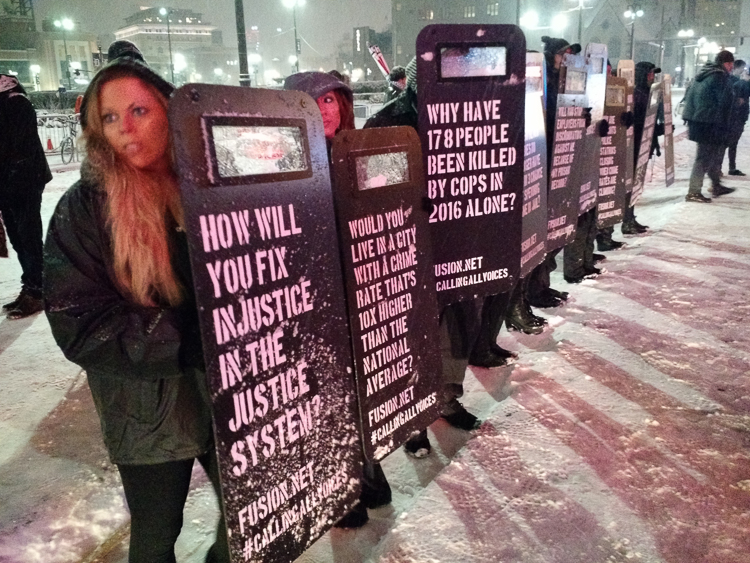 But the strongest voices among them were the ones who called for the arrest of the Governor carrying wanted posters with his image and projecting the words, “arrest [Rick] Snyder” against the side of the theatre. 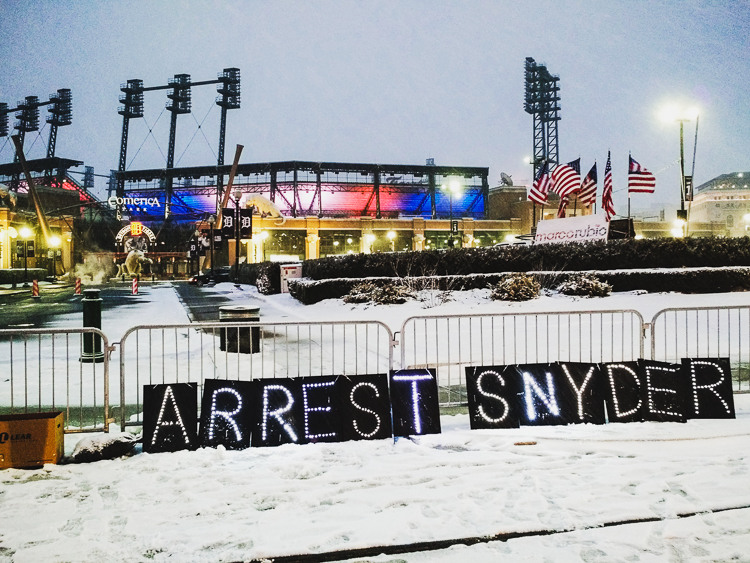 An old woman who was eating snow as she passed out fliers with information on how to obtain clean drinking water said that she was there because, “I saw how [the lead in the water] affected my neighbour’s little girl…praying about it wasn’t going to be enough.”

The Flint water crisis has left up to 12,000 children with lead poisoning, causing permanent damage to their growth and mental health. 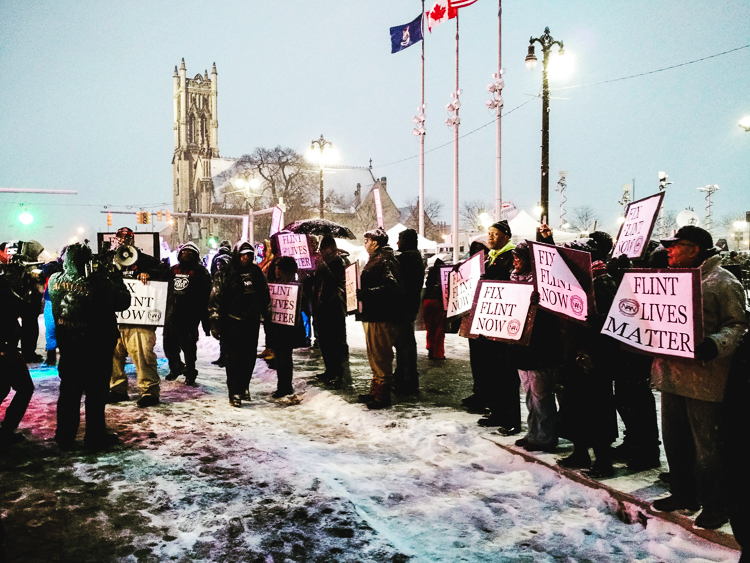 “When you’re scared to drink the water, a little snow ain’t gonna stop you.” One Flint resident said about the crowd who stood in the cold for hours to protest.

Flint had been connected to Detroit’s water system for 50 years until the city’s emergency manager switched its water source to the Flint River in 2014 in an attempt to save the city money. For two years since the change the water, which contained corrosive chemicals, ate away at the city’s lead pipes and poisoned its residents.

In January 2016, nearly four months after the water’s contamination had been uncovered, Governor Rick Snyder declared a state of emergency and has since signed a $30 million relief bill. But e-mails from Snyder’s environmental policy advisor Valerie Brader show that she suggested to her colleagues that the city reconnect to the Detroit system as early as October 2015. Brader expressed concern about the water’s quality after chemicals that were used to treat it against bacteria caused GM to stop using the Flint River as a source because it was wearing away at their machinery.

The federal government has also attempted to step in, but Mike Lee, a Republican Senator from Utah continues to block the $250 million in aid the city is supposed to receive. According to the Daily Beast, the Senator was revealed to be the last man standing in a group who were blocking the bill using a maneuver called a “hold”, which is meant to keep the identities of the lawmakers involved a secret.

Until recently Ted Cruz was a part of the group blocking aid to Flint on the grounds that it was a local issue and being moved through Congress too quickly. But Ted has backtracked in the past week, either because he realized that the federal government is meant to step in when something this catastrophic goes ignored by local officials, or that it just might be a bad idea to run for President while actively refusing to help Americans who have been poisoned by their tap water.

The water crisis affects nearly every other issue the candidates have been discussing in between insults. From the economic crisis which caused the city to change its water supply, to illegal immigration.

Even if the aid does get through to Flint, its undocumented population — required to provide a social security number when receiving drinkable water — is trapped in the shadows and left with no choice but to turn themselves in or allow their children to drink poisoned water.

As the people of Flint stood in front of the Fox demanding answers, the State’s elected officials cheered on their private parade of clowns who spent half the debate throwing verbal pies at each other and only devoted 60 seconds to Flint – in one question answered by Marco Rubio. But under the slimy surface of showmanship that took over Detroit’s debate are real people who will have to live in real communities that might be best served when the GOP seriously reflects on what it’s become.

Donald Trump’s candidacy has cursed the entire process with a lack of dignity and blessed the rest of us with the most entertaining thing to happen to presidential politics in recent, and maybe even distant, memory. The presidency is something that all Americans are meant to aspire to, so we have to believe that the parties would only put forward their best to choose from. And if this is truly the best they’ve got, if everyone on offer has joined in on the act who are we to try and put a stop to it?

Instead, let’s gorge. Let’s binge watch this freak show with the same lack of restraint we usually reserve for times when no one is around to judge and feed this beast all the way to November when the party is forced to consider how it allowed its leaders to become a sideshow.

If you want to learn about how you can help the people of Flint visit helpforflint.com.