His hands are speckled with colour from the spray of the can he’s been using for the past two days. What isn’t on his hands has made it onto the massive four-square-metre sheet of plywood held up by wooden supports in the courtyard. His jeans and sweatshirt bear similar sprays of colour, but his face holds the easy going smile of a person who is content. His grin is slightly lopsided, and his eyes crinkle at the edges like they’re in on the joke. He’s a graffiti artist from Copenhagen, and he’s obviously found his calling.

Standing on the concrete steps outside behind Godsbanen, a cultural centre in the middle of Denmark’s second biggest city, we overlooked an impromptu wall of plywood erected for the occasion. There are numerous other plywood monoliths surrounding us, all of them marked and coloured by layers and layers of paint, sprayed on meticulously over the last two days. But it’s the four-metre-high wooden canvas directly in front of us that we’re focusing on now. The snarling purple ape is somehow not as intimidating as you would think—it’s not a conventionally artistic image, but the artistry is undeniable.

Rasmus Balstroem got his start in graffiti the same way most people do—tagging public property and vandalizing the walls of side streets and alleyways with his friend Jacob Larsen, who stands off to the side in a grey paint-streaked hoodie and sweatpants.

“I would say that the general perception is that graffiti is something that young boys with masks and shit do for crime,” Balstroem says. “But I would say that it’s growing a lot in Denmark. I teach at universities and work with troubled kids in rural areas and teach them graffiti and get paid by the government to do that, so I would say that they are loosening up quite a bit.”

This is the Aarhus Art Convention, still new in its second year, held in the centre of Denmark. Consisting mostly of graffiti and tattoo artists, the convention also hosts traditional art forms such as canvas paintings, a series of lectures by well-known artists and even a professional barber who appears to be in high demand. In one of the most progressive countries in the world, attitudes towards “underground” art aren’t so underground anymore.

The difference in the name is telling—in North America, this would be a tattoo and graffiti convention. In Denmark, art is a far more fluid concept, or is at least on its way to becoming one, says Frederik Christian Rasbech, one of the event’s organizers. Tattoos fall somewhere between what is art and what is not, he says.

“In Denmark, we’re very liberal, we always have been. So people started getting tattoos really in 2001 and 2002, it became really really popular and that’s fifteen years ago now,” he says. “So people are quite open-minded and they don’t consider it as art but they don’t reject it as a rebel thing anymore either.”

The crowd is varied—it’s not all millennials in band t-shirts and ripped jeans. An older couple walks by hand in hand, dressed unassumingly. A woman in her mid-twenties has a tattoo snaking its way around the right side of her neck. A man buys hot chocolate for his small son, who is scooting around the convention on a toy bike, helmet firmly strapped to his head.

Public visibility is an important draw for artists attending the convention, Jacob Larsen says—the spray can Balstroem has in his hand rattles behind us as he jumps down from the scaffolding.

“At an event like this, you can see all the painters, you can see their faces, they have their names here,” Larsen says, gesturing back to Balstroem. “Vandalism is something you do when nobody is looking. I don’t see any similarities except that you have a spray can in your hand.”

Both tattoo and graffiti artists are here for another important reason, says Rasbech—networking. Instead of putting visiting artists in hotel rooms for the weekend, the organizers of the convention have converted a 13,000-square-foot gallery space in the centre of Aarhus into a makeshift barracks for convention artists. They eat together, they sleep together and they party together, says Rasbech.

“All the painters are staying down there together and they’re not really used to that. They go to [conventions in] Vienna, they go to Berlin, they get a hotel room and they will be alone,” he says. “Here, they’ll be together—I think it’s more of a family thing and I think they appreciate it. They get to make new friends and they get to expand their network.”

While the graffiti artists are mostly Danish, the group of tattoo artists that have taken up residence in the long hall in Godsbanen for the weekend come from all over the world. Two aisles of tattoo booths have been set up in the gigantic space—artists from Spain are next to a group from Berlin. Danish artists are present too, but for many, this is a chance to get the word out about their particular talents when it comes to putting ink under skin. 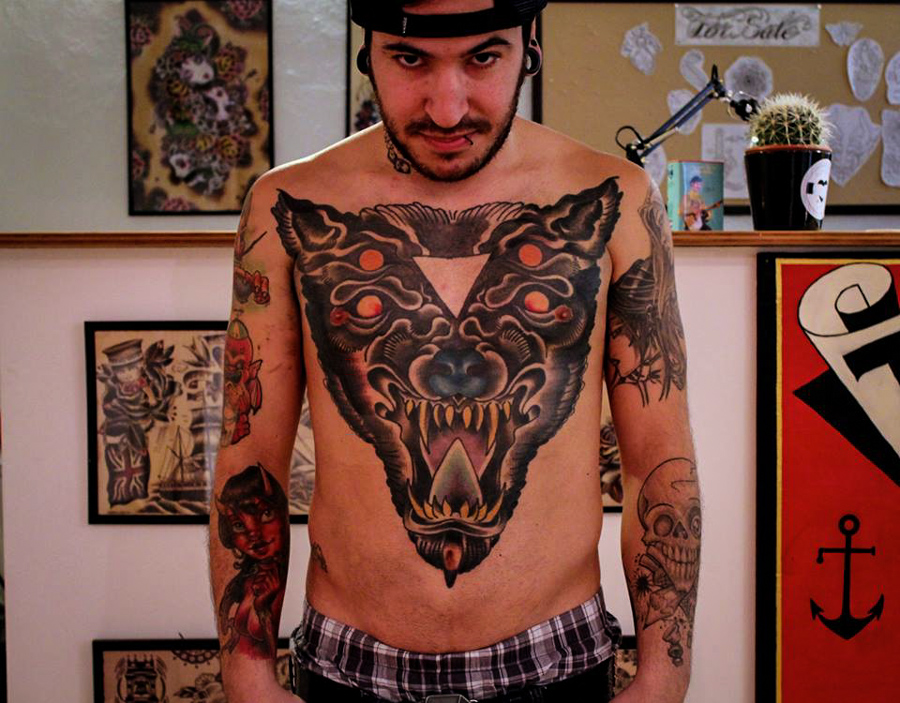 The weekend of the Aarhus Art Convention is a weekend of layers—paint on plywood, ink under skin. What was once a group of coloured lines and random streaks of spray paint on plywood is now a snarling purple ape, astonishing in its detail—it’s late afternoon on Sunday and Larsen and Balstroem’s work is done.

“The primary reason for this event is not to bring a focus to graffiti in particular,” Larsen says. “It’s just having a cultural meeting where a lot of styles go together and people can experience what spray-can art can be instead of just seeing a tag and thinking that everybody who has a can in their hand is doing something illegal.”