December’s blockbuster Rogue One featured the construction of the infamous Death Star –the giant planet-killing superweapon the size of a small moon. Updated from its humble 1977 model, the looming skeletal superweapon made a fantastic set piece as our heroes sought to foil its development. Is it possible that real-world space construction will ever rival the spectacular star cruisers and space stations we see in sci-fi?

Building in space presents a set of alternative challenges that differ from those of conventional Earthbound architecture. On the positive side, space architects no longer have to worry about the surly bonds of gravity weighing down their endeavors. Modern space stations can sprawl in many strange directions that would be otherwise impossible on Earth. Modular construction methods mean that engineers can shunt new buildings and rooms into position without much hassle.

That said, space has problems of its own. Ultimately, most space travel problems boil down to a question of weight. Fuel is expensive and the massive fuel tanks required to lift payloads off earth are even more costly. Every ounce of material must be calculated, organized, and trimmed in order to keep space missions from going over budget. Steel girders? Concrete blocks? Forget it. Everything that goes into orbit must stay light and durable.

One way scientists hope to circumvent the fuel problem is by constructing a “space elevator.” It’s exactly what it sounds like: a gigantic, multi-mile elevator that would stretch up beyond Earth’s atmosphere. Travelling to outer space would become as mundane as stepping on a platform, pushing a button, and then enduring twelve hours of The Girl from Ipanema. This project would quickly break every record as the largest piece of human engineering in history, and pave the way for even bigger space engineering projects. We have the science backing us up and the engineering apropos to pull it off – but the biggest problem between us and an elevator ride to space remains the materials. What materials are light enough to reach orbit and stay in one piece? 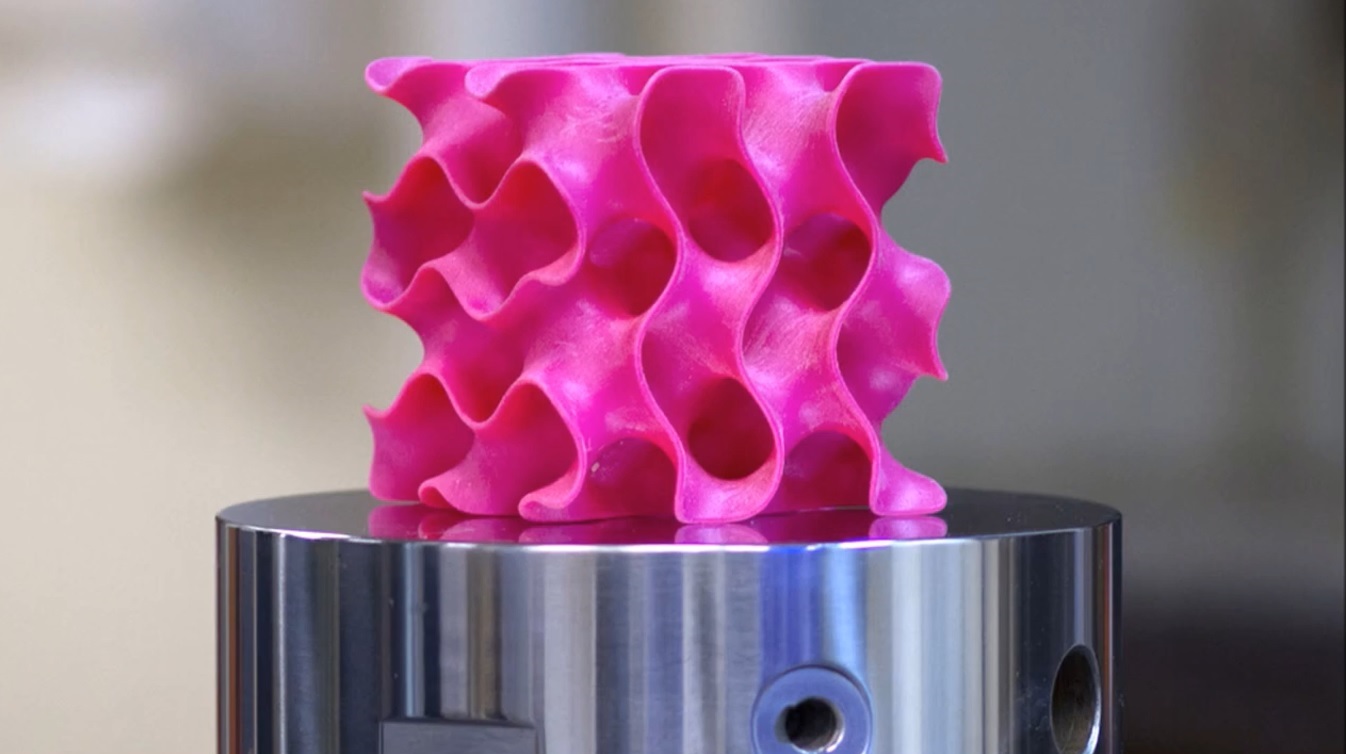 In January 2017, a team of Massachusetts Institute of Technology (MIT) scientists have designed one of the strongest and lightest materials ever constructed. At first glance, the porous pink chunk looks like a teething ring for a giant baby. It’s actually a form of graphene, a two-dimensional variety of carbon and also one of the strongest materials on Earth. But because graphene in its natural state is so rare and so thin – it naturally coagulates into constructions only an atom thick – it was long dismissed as impractical for any real heavy-duty building.

MIT managed to circumvent the problem of thickness through a combination of heat and extreme pressure. By scanning computational models of the form they wanted to create – a light, porous assembly that would be able to withstand pressure and disperse tension – they were able to mass produce natural graphene into the shape they desired. Samples of the porous material they created were ten times stronger than the toughest steel alloys, and weighed only 5 per cent of an equivalent mass of steel. A graphene tower could easily stretch into space for a fraction of the cost and effort an equivalent tower of steel would require. The porous shapes don’t require graphene to function, either: equivalent shapes can be constructed out of handy organic materials like cellulose and silk for some truly green architecture.

While we might not ever get to build a Death Star or Enterprise in our lifetime, MIT and other technological institutions are laboring to bring a little bit of sci-fi into our lives every day.