Desert temperatures that exceed 104 degrees Fahrenheit have left the surface inhospitable—which is why over half of the town’s 2,000 citizens live underground.

Coober Pedy, a small town in South Australia, sits upon the edge of a scarp on beds of sand that are topped with stony desert. With its treeless surface and rocky terrain, the town would appear completely deserted if it weren’t for a few houses, restaurants, a police station and a hospital sparsely scattered throughout. Desert temperatures that exceed 104 degrees Fahrenheit in the summer and a lack of rainfall have left this town nearly inhospitable on the surface. Which is why over half of the town’s 2,000 citizens live underground.

In February of 1915 opal was discovered in Coober Pedy by a 14-year-old boy who was camping with his father’s gold mining troupe. News of the discovery spread and within a few years, prospectors began digging up the city.

Because of the harsh environment, miners got the idea to build their homes underground as a solution to the problem – plus it allowed them to dig for opal in the comfort of their living room. According to the Huffington Post, they would use old opal mines or dig out new structures for housing. Called ‘dugouts’ they resemble caves and often burrow into the sides of hills. Tubes protrude from the hillside and provide ventilation.

The homes maintain a comfortable temperature – they require no air-conditioning or heating, which in turn greatly reduces the town’s carbon footprint.

While older homes were dug by hand, the new homes are dug out with machinery. The sandstone walls are then sealed with a clear coat to prevent them from becoming dusty.

The homes maintain a comfortable temperature – they require no air-conditioning or heating, which in turn greatly reduces the town’s carbon footprint.

If you’re looking to visit Coober Pedy you have the option of staying in an underground motel or hostel. Besides being one of the biggest opal providers in the world, the biggest form of entertainment in the town is golf. Because of the heat, many residents play after dark with glow in the dark golf balls. Since the course is mainly grass-free, players carry their own patches of turf with them at all times.

Despite being underground, Coober Pedy has got all the trappings of any other small town – a bookstore, church, art gallery, shops and hotels. Whether you’ve made this a stop on your destination bucket list, or you’re just passing through – make sure you keep an eye out for the giant holes in the ground. 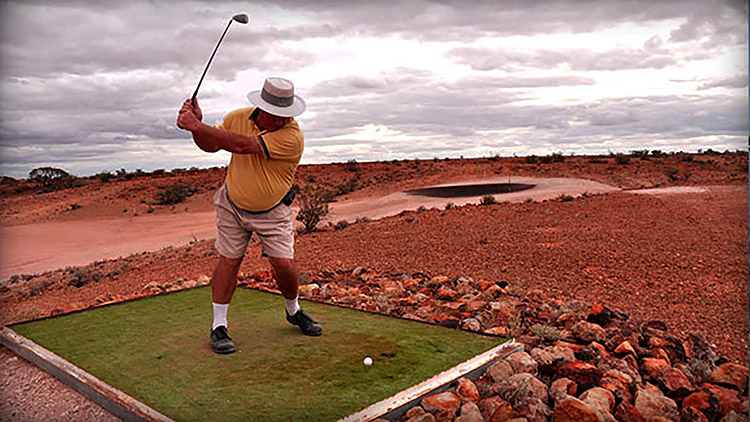