Raëlians believe that alien scientists designed humans. I went to one of their meetings.

Home » Raëlians believe that alien scientists designed humans. I went to one of their meetings.

I’m 15 minutes early for the November Raëlian meditation gathering. I have no idea what to expect. Aside from a few visits to church as a kid, I’ve never attended a spiritual meeting, let alone one for a group that Wikipedia describes as a “UFO religion.”

The Raëlian movement is far from conventional. It was founded by a man named Claude Vorilhon who once ran a successful car racing magazine in France called Autopop.

That changed in December 1973, when Vorilhon says he had an encounter with an extraterrestrial named Yahweh who explained the true origins of life on Earth, and tasked him with spreading those teachings.

Within a year, Vorilhon had given up his magazine, published a book about what he learned from Yahweh, and changed his name to Raël. He started making appearances on French radio and TV, and soon gained a following.

Claude Vorilhon is the Leader of the Raëlian movement 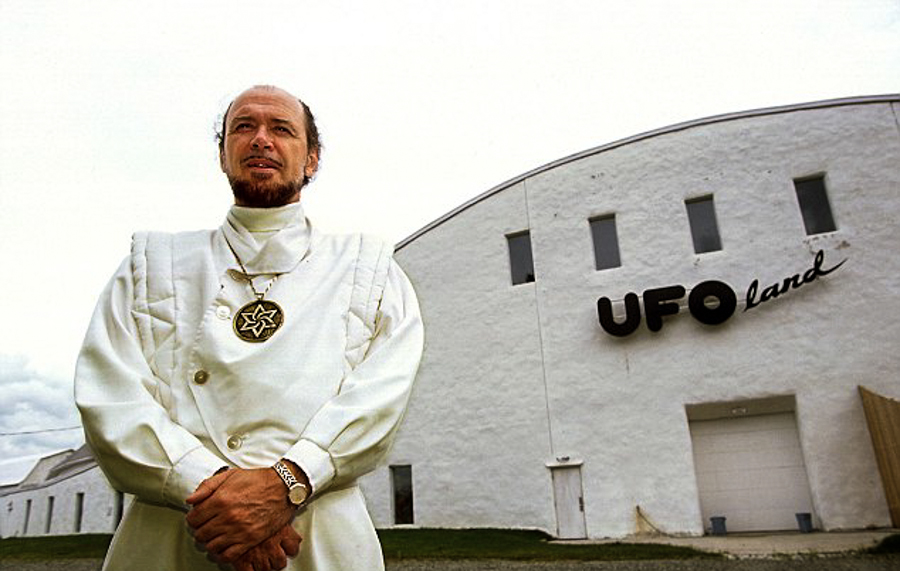 Raël writes in one of his books, Intelligent Design, that all living things on Earth were designed thousands of years ago by the scientists of an advanced civilization on another planet. They’re called the Elohim, a phrase that Raël says meant “those who came from the sky” in Ancient Hebrew.

According to Intelligent Design, many deities and prophets from various cultures were really Elohim messengers. Each one told the human race what was appropriate for that stage in our species’ development. Now that we’ve developed enough, Raël says the Elohim would like to meet us and have us know the truth.

Raëlians believe the Elohim will only come to Earth if humans show that we want them to. To do this, we must build an embassy. That’s the mission of the Raëlian movement. Believers have sent requests to governments all over the world for the land and rights needed to build the embassy.

A paper published by Washington and Lee University estimates that there are currently around 60,000 Raëlians in over 100 countries.

Canada has an active Raëlian community. It made headlines in Montreal this August for its annual Go Topless Day celebration, which is part of a larger Raëlian belief in women’s rights and social justice.

Today’s gathering is in a classroom at the University of Toronto. It’s so close to the subway that I can hear trains going by. When I enter, I’m greeted by Patrick Rhein and Gisele Gagne, who are preparing the space before everyone else arrives.

Chairs are arranged in a semicircle. Rhein cheerfully jokes that he could be a DJ as he sets up a projector and speakers. A blue, shiny cloth is laid out on the ground. On it, Gagne is carefully arranging bundles of artificial flowers, butterflies, and iridescent white stars.

Raëlians believe the Elohim will only come to Earth if humans build an embassy. This is the Design:

A table across the room is decorated with a Buddha statue. Propped up on the ledge under the chalkboard is a portrait of Raël. A smaller photo of him and an angel statuette garnish another table nearby.

Raël strikes me as an interesting dude. The pictures show he’s been rocking the man-bun for decades. Some quick Googling tells me that the guy competed in some professional sports car races in the ‘90s at the request of his followers. He doesn’t seem like your archetypal prophet.

More Raëlians are starting to arrive, all of them older than thirty. They clearly know each other well, and many are wearing the Raëlian symbol—a swastika inside a Star of David—around their necks. I’m struck by how pleasant and stylish they are. They’re also all happy, constantly smiling and laughing. The atmosphere in the room is contagious. 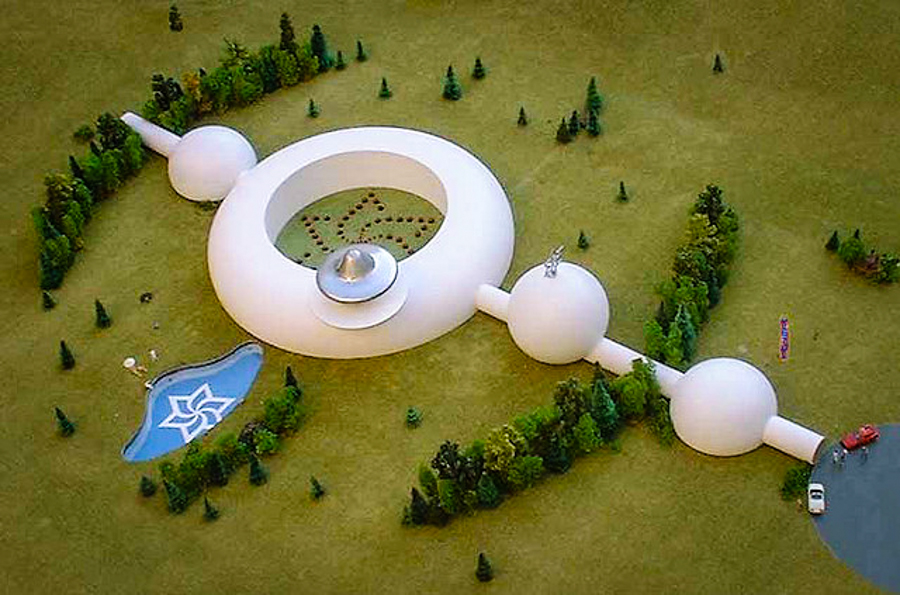 It’s clear that they’re all educated. One man is a gynecologist who has done charity work in Africa, and many others say they have scientific backgrounds.

Behind me, next to the apple juice and sparkling water, there’s a display of the various books written by Raël. I flip through them briefly. They cover topics ranging from cloning and meditation to politics and the Internet.

As we wait for the meeting to start, I mingle with a few attendees. One man tells me about how he first dismissed the Raëlian movement as a bunch of crazies, but gradually began to believe in it.

“The more I read, the more it really started to make sense,” he says.

A woman tells me it’s nice for her to see someone younger there. Her children, she says, became interested and went to Raëlian events with her in their teens. They’re now adults, and still involved in the movement.

“They’re so lucky to know what they know at such a young age,” she says. 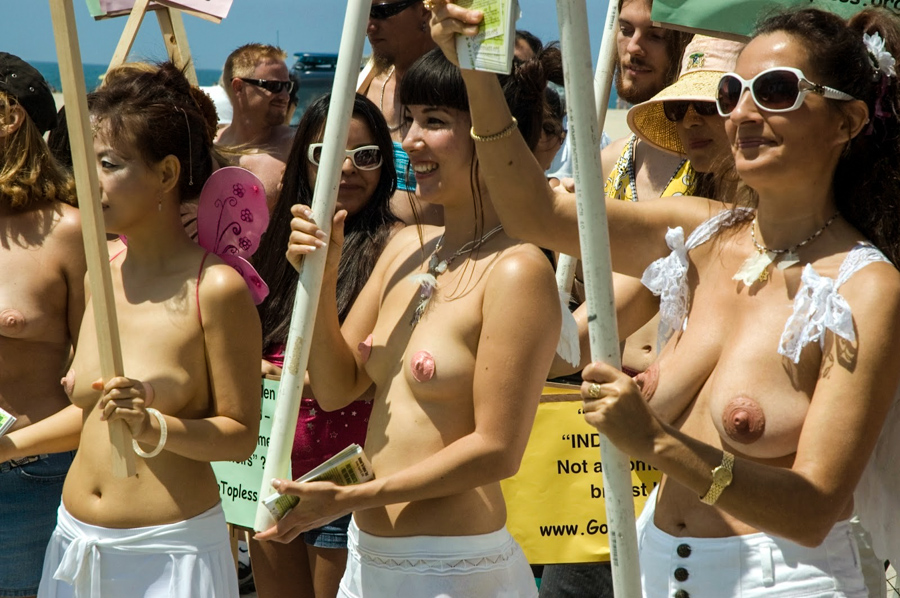 The meeting begins, and we learn that the theme for November is sharing. We watch a video portraying a chain of acts of kindness, scored to Matisyahu’s “One Day.” Then, we move into the meditation.

Diane Brisebois, the Raëlian spiritual guide for Ontario, is leading the meditation today. She joined the religion at age 17.

“Since I’ve been meditating I’m more grounded. I’m more able to focus, and therefore I’m able to make better decisions. I’m not as emotional, I’m more constant and I modulate more,” Brisebois said. “When I was a teenager I was experimenting with pot and recreational drugs, and after I discovered the message, I became much more respectful of my body. After that I never got drunk, I never used drugs, because I realized that if you respect what you’re given, then you would treat it as a temple.”

The Raëlian teachings include a desire to live as long as possible. Raël teaches courses in healthy living, and Raëlians generally abstain from using drugs and alcohol.

“It’s changed my life in many ways, all of them positive,” Brisebois said.

Brisebois was trained in public speaking by Raël himself. She is currently in charge of the effort to build the Raëlian embassy in North America, and sent requests to the Canadian government this past spring.

Brisebois says that several countries have already agreed to host the embassy, though the information is confidential right now.

“The only challenge that we have is in having the extra territoriality. Because there’s going to be UFOs landing at the embassy, we also need the airspace,” she says. “That doesn’t exist right now, so that’s where legislation would have to be put in place.”

A Raëlian meditation takes place in 1984: 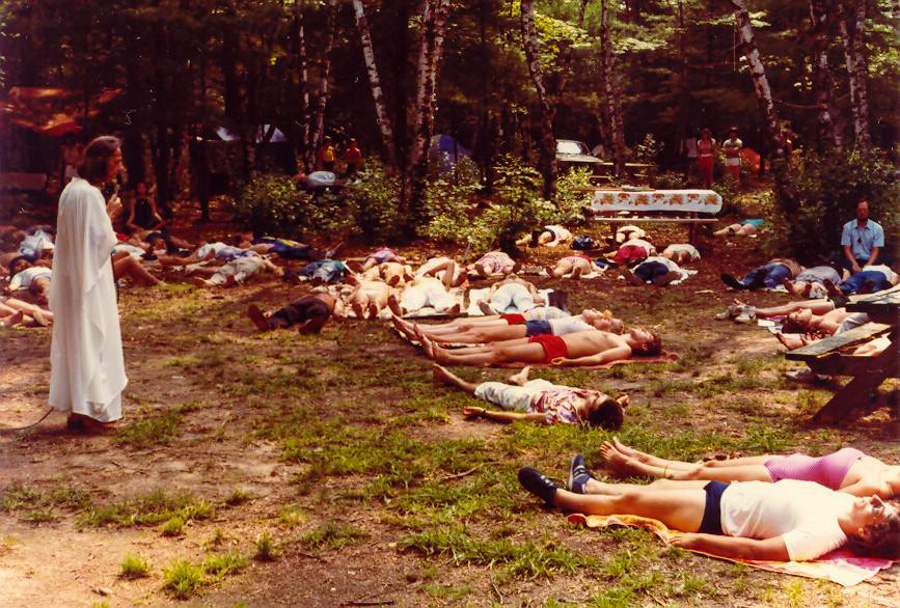 Once the airspace and land are figured out, Brisebois says it would likely take a year or so to build the embassy.

“It’s a pretty simple project,” she says. “You just want rooms where there would be conferences, rooms where [the Elohim] would be sleeping, and a swimming pool where they could bathe. And there’s a landing pad. For us it’s very exciting… now it’s the actual welcoming. And this is going to happen before 2035 at the most. So this is very close now. It’s going to happen during the time Raël is alive.”

The meditation starts with deep breathing. Then, we embark on a journey from our own bodies on a cellular level to a view of the universe on a grand scale. We even stop by the planet of the Elohim, described as a lush place where large strawberries grow. “[The people] are four feet tall,” Brisebois tells us sothingly, soft music swelling in the background. “They look like children. They laugh like children.”

My phone tells me the meditation lasted nearly half an hour. I could’ve sworn it had been five minutes. I’m filled with a sense of inner peace, and my body is incredibly relaxed. I open my eyes a little before everyone else. Everyone’s faces show the same beatific expression.

Next is an activity where we hug and/or compliment every person in the room to practice kindness.

Raëlians do this sort of thing on a larger scale as well. Rhein tells me that in the past, groups of them have gone out and given free hugs and free compliments on the street. He says the reactions they get are mixed, but emphasizes that aggressiveness should be fought with more kindness.

“The only thing that matters is love,” he says. “This is how we can change the world, one person at a time.”

I feel a little awkward at first, but everyone is exceedingly nice, open, and friendly. I get and give numerous compliments, some which are so kind that I don’t even know how to respond. I start feeling more at ease.

Most attendees go in for a hug. These are not the loose hugs of strangers, either. They remind me more of hugs from friends you haven’t seen in a while.

One older man leaves early, and gives me a copy of one of the books as he goes. He says it’s a thank-you gift for being interested.

As the meeting comes to an end, they express hope that I’ll want to return. They don’t push the issue, though. They don’t even ask.

As Rhein and Gagne pack up, a familiar piece of classical music comes on over the speakers. The mood in the room is so upbeat that a pair begins dancing to it. Another pair joins in. It only lasts a minute, but everyone there is practically beaming. I’ve never experienced an environment so positive. I walk to the subway. A friend texts me, wanting to know how the gathering went and how I feel. I think about that for a second. Words fail me.