Step into dead silence; the quietest room in the world, where you can hear things that you’ve probably never heard before, like the blood flowing through your body.

The record time for staying in this room is just 45 minutes before people start panicking, get nauseous and have to escape.

Located in Minnesota in a lab, the room has an intriguing and unique design that makes it the quietest chamber in the world. The walls are doubled with fibreglass wedges to make the sound frequency bounce into and stay in the wall. Below the floor are more of these fibreglass wedges. The floor itself is mesh, similar to the material found on a trampoline. This strategic design allows the room to remain 100 per cent effectively sound-proof.

In a YouTube video by Veritasium, the host is shown to stay in the room—otherwise called an anechoic chamber—and record his personal experience. He said that he was very calm, however he could hear every little thing. His microphone even picked up his heart beat. The host ended up beating the 45 minute record by about 12 minutes. Although, he did start to panic towards the end because when he wanted to leave the room, the people working there weren’t responsive and he had to figure the way out by himself.

The lights were also shut off in the video. For some, this could be the reason why they panic, as darkness and silence go hand in hand in making things seem a lot scarier than they are.

“It felt like there was a lot of pressure on my head,” Robert Willes, a cellist said in the video. “It’s very claustrophobic.” 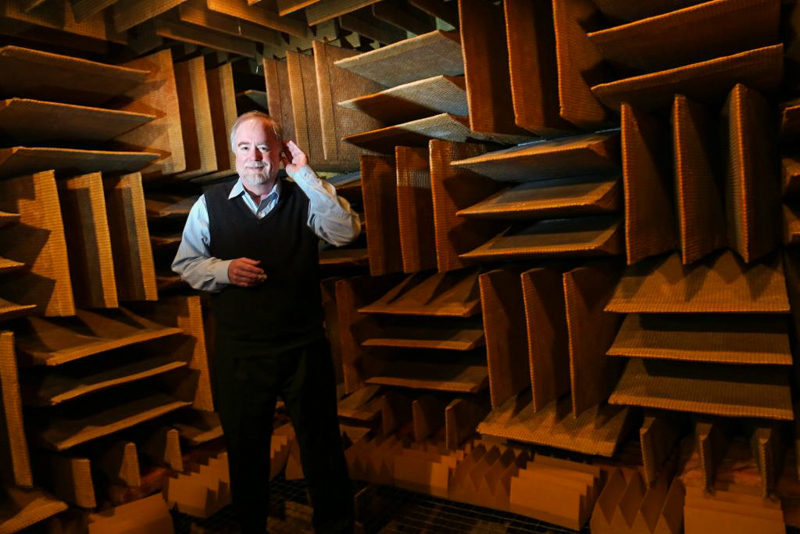 During the video, which has over four million views, A BYU Acoustics spokesperson (who works there) said that a musician once came to play his violin and had a panic attack within seconds. They encourage people to tell them that they want to leave “before [they] make a mess in our expensive facilities.”

Although the Guinness Book of World Records has recognized Minnesota’s to be the quietest room in the world, the University of Salford’s in England allegedly is more silent, as it has lower decibels, which is a unit that measures the intensity of sound.

To some, the room is their biggest fear, but to others, it’s just a room. You never know, you might even like the silence.