There is something deeply disturbing about seeing the soiled innocence of a child. Its power lies in its familiarity. In children we see two visions of the world— visions of our own distorted past and visions of the child’s divined future. Photos of suffering children become powerful in ways that photos capturing the grief of hundreds never could.

But this is not the first time that the image of a child has shaken the history.

The Napalm Girl By Nick Ut

In 1972, AP photographer Nick Ut watched a South Vietnamese soldier with a guide bomb, yellow smoke billowing into the air. An hour later, an A-1 Sky Raider cut through the sky pouring napalm onto the villagers below. A woman came running holding her grandson screaming “Help me, help me, help my grandson.” The boy’s flesh was badly charred and he died in her arms. While most photographers shot their entire rolls of film on the grandmother, out of the corner of his viewfinder Nick Ut, just 19-years old at the time, saw a naked girl running arms out stretched like a crucifix. Phan Thị Kim Phú was 9-years old and ran naked towards the camera among a group of screaming children. After taking the photo, Nick Ut borrowed a raincoat to cover her, put the children in his car and drove them to the hospital. The skin was peeling off Kim’s back like wallpaper. The entire ride she kept telling her brother that she was dying. When the editors at AP Saigon saw the photo, they discussed whether they could print it, due to the victim’s nakedness, something unprecedented at the time. Ultimately it was decided that the photo’s power trumped its controversy and the photo was released to publishers in New York. The photo not only vaulted Nick Ut’s career, but sparked global anti-war action. The next day anti-war protests sprung up in Paris, London, Japan and Washington D.C. outside the White House. Nick Ut saved Kim Phú’s life. They maintain a close relationship to this day and she calls him “Uncle”. The image is widely-known as one of the most memorable photographs of the 20th century.

In Bhopal, India on December 2nd 1984 methyl isocyanate gas leaked from the Union Carbide Corporation’s pesticide factory immediately killing roughly 2,259 people. 30 metric tons of MIC leaked into the atmosphere in 45 minutes. Eight thousand more would die in the coming days and hundreds of thousands of injuries due to exposure. The Bhopal Gas Tragedy is considered the worst industrial disaster in history resulting in a death toll so high it caused a shortage of grave sites. Pablo Bartholomew was there and captured the image of a young girl who was fatally poisoned and buried in a mass grave. The gas caused stampedes and many mothers were separated from their young ones. Bartholomew’s photo brought the Bhopal Disaster into the living rooms of millions putting pressure on the District Court of Bhopal India to prosecute the UCC’s ownership structure for negligence. UCC paid out $470 million and in 2010 seven ex-employees were sentenced to  two years in prison, the minimum punishment by Indian law.

In 1992, South African freelance photographer Kevin Carter captured a photo that would ignite a global dialogue on hunger. The photo was taken when a United Nations food distribution plane landed in Sudan. As one child collapsed crying onto the scorched earth, a vulture landed behind her. The photo caused a tidal wave of public discourse, not only about child hunger, but also about the line of responsibility journalists walk when covering human tragedy. Are journalists expected to help by interfering? Or by drawing awareness through their work? Carter received backlash upon publishing the photo and was deeply disturbed by the human atrocity he witnessed. Carter later committed suicide.

This iconic photo framed the spirit of a tragedy that gripped a nation. April 19th, 1995 Timothy McVeigh and Terry Nichols carried out an attack on the Alfred P. Murrah Federal Building in Oklahoma City. The Oklahoma City bombing killed 168 people including 15 children. An additional 324 buildings were damaged and 680 people were injured. Photographer, Charles H. Porter IV captured firefighter Chris Fields cradling the limp body of a bloody child in pink socks. Her name was Baylee Almon. She was one year and one day old. The photo captured the frailty of innocence and the desperate emergency response of beginning a national discussion about domestic terrorism.

After The Storm by Patrick Farrell

2008 was the cruelest hurricane season Haiti has ever experienced, the island barraged by storms Fay, Gustav, Hanna, and Ike. On his fourth dispatch, Miami Herald photographer Patrick Farrell watched as Hurricane Ike drowned the countryside swallowing homes and Haitian lives. In some places the water reached 4 metres deep. One million were rendered homeless and over 800 people died. Farrell won a Pulitzer Prize for his photography of the 2008 Haitian hurricane season, specifically this image of a naked boy reclaiming a waterlogged and grimy baby stroller that had been lost in the wreckage. The image of a naked boy wading through ankle-high water pushing an empty baby stroller raises an uncomfortable question, of how much had Nature stripped him?

On October 18th 2003 Saleh Khalaf and his brother Dia were walking home from their first day back in class when they came upon an American cluster bomb that failed to detonate in the March invasion, seven months prior. The bombs were frequently mistaken for toys by Iraqi children. By the time Saleh’s father, Raheem reached his two sons he thought Saleh was dead and immediately went to help Dia. Saleh’s intestines were in a small pile outside of his body and the only remainder of his right hand was a protruding piece of bone. He left him there on the sidewalk only to return home once Dia had been pronounced dead at the hospital to find Saleh was still alive. Most Iraqi clinics were rendered dilapidated by the ongoing conflict, but Raheem wasn’t going to lose two sons in one day. He did the unthinkable. Raheem drove to the U.S. checkpoint of Tallil Air Base and desperately tried to explain his situation. Col. Jay Johannigman, M.D. knew he was only supposed to treat American soldiers, but made a split second decision to save the boy. Over the next 24-hours Johannigman would perform 10-surgeries, using an IV bag as a temporary skin graft to hold in Saleh’s vital organs. It was this creativity that saved Saleh’s life. Once Saleh was stable, Johannigman arranged for him to be airlifted to Children’s Hospital Oakland who offered to rehabilitate the boy for free. Saleh’s resilience earned him the nickname “Lion Heart”. Dianne Fitzmaurice and writer Meredith May documented the mercy mission that changed public perception of Operation Iraqi Freedom. It exposed the brutal reality of American invasion while simultaneously exposing the empathy of individual American soldiers. According to SF Gate, “In Saleh, Johannigman had found a piece of war-torn Iraq that he could save”. 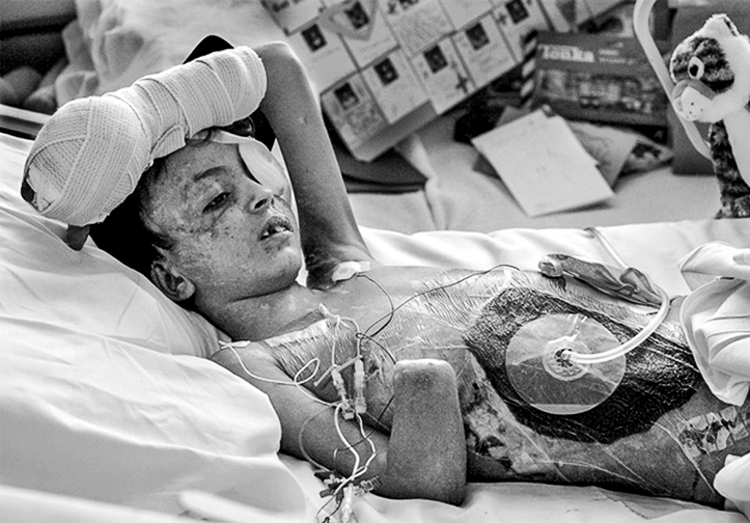