In 1998 I sat cross-legged in my grade one classroom in Alberta during my first ever lesson about sex. Our teacher was teaching us proper body part names. She sat at the top of the classroom having us repeat after her: “penis” “buttocks” “vagina” “breasts”. At the ages of six and seven, most of us already knew these words; she was getting us used to actually using them. Then, she moved on to the lesson: a series of hypothetical stories of child molestation. It sounds bad, but it wasn’t. She read from a book, treating this lesson just like our usual story time. “This is Susie,” she would say, holding up the picture of Susie. “Susie is ten and every night, her grandpa touches her breasts. He tells her not to tell anyone. Should Susie listen to her grandpa or should she tell a parent or trusted grownup?”

“Tell a grownup” we would all yell and we would move on to the next story. To finish the lesson, we sang a song. “Trust your feelings; your body belongs to you.” That line of the song resonated with me at the time. It was one of my first ever lessons in sex, put so simply. It’s also a message I’ve come back to many times.

That same year is the last time Ontario’s sex education curriculum was updated. The following year, I moved from Alberta to Ontario. Attending school in that part of Canada between 1999 and 2009, I became a product of Ontario’s curriculum. Just this week, the birds and the bees spiel given in Ontario schools has been updated—for the first time since the late 1990s. It now includes topics such as sexting, factors that influence sexual decision-making, gender expression and forming healthy relationships.

How could it have taken so long?

How education providers managed to neglect updating such a major area of learning for 17 years is beyond me. For reasons unknown to me, sex ed in North America can be a taboo topic. Sweeping it under the rug has become easier than the progressive approach. Think of what other school subjects would look like had we still been teaching knowledge from 1998: geography classes wouldn’t mention major natural disasters like the 2010 Haiti earthquake or the 2011 Japan tsunami; lockdown drills wouldn’t have been redesigned after the Columbine shootings; politics lessons wouldn’t talk about the first black president in America; history books would be void of the events of 9/11; sociology teachers wouldn’t yet discuss Islamophobia or legalized gay marriage; your tech and computer classes would be using programs and machinery we now don’t even recognize and science class would be behind on stem cell research advancements and 3-D printing.

Topics like sexting, cyberbullying, and gender identity must also be covered.

All of these have dramatically changed. So has the culture of sex. So why are educators bullied into talking about sex the same way we did in the 1990s? One could even argue that your attitudes and values about sex affect day-to-day life more than many of these other subjects we learn about in school. I say that not to downgrade school lessons, I say that to put weight on the value of gathering knowledge and forming personal values around our sexualities early on.

I was disappointed in my sex education at the time and at 23, I’m still sour towards the program. I commend those who approved the Alberta lessons. Part of what made those grade one classes so valuable was that those in charge of our education were being honest. They were matter-of-fact lessons with simple solutions that could easily be applied through to adulthood.

But as I went through with sex ed classes in Ontario, I sat in classrooms where teachers glossed over key issues—too squeamish to touch on topics that would have the overly-cautious school-dance-chaperoning types of parents kicking up a fuss. I remember talking about proper names of genitals in grade five. Talking about the word “vagina” is useless when many girls are expecting their periods within the next year or so. Talking to kids about pubic hair isn’t informative when they already have it and acting skittish about the technicalities of sex is cowardly when they already have boyfriends and rape stories are on after-school news programs.

Many prudes gathered in front of Queen’s park in Toronto on Feb 24 to protest against Ontario’s new sex education curriculum. But Education Minister Liz Sandals says the government won’t back down. 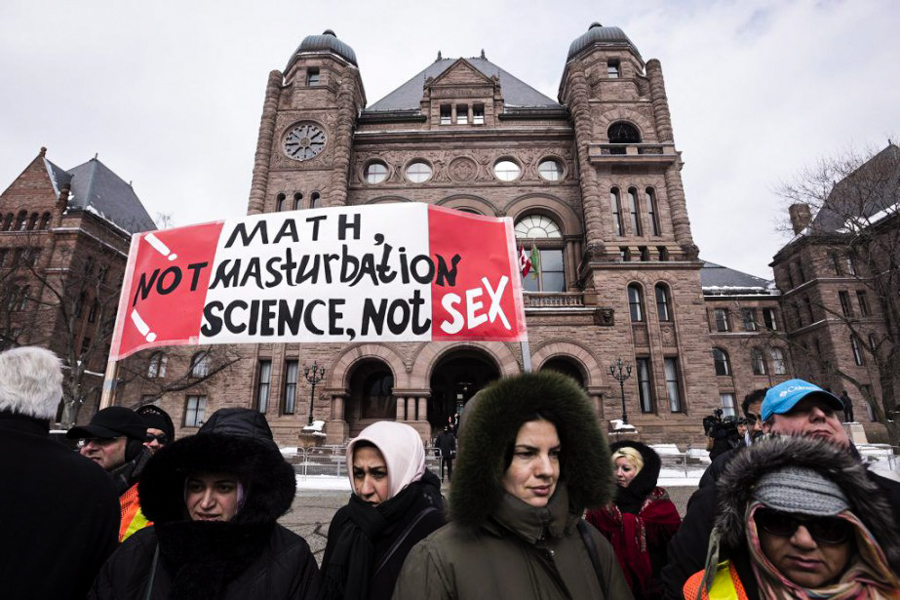 For the past while, Ontario students got the watered down version. At worst, they got a heavy dosage of the Catholic Church’s agenda to go with it. Gone were the days where I learned “Trust your feelings; your body belongs to you.” Instead I learned “Abstinence is key,” and “The safest sex is no sex.”

What purpose did they think that would serve? I have often wondered this. How are young people supposed to figure out what constitutes a healthy sexual relationship when all they learn is avoidance?

Now, “no means no,” and “yes means yes,” are the phrases that emphasize consent and echo the one that I learned: “Your body belongs to you.” I hope these statements find a prominent place in classrooms so that both boys and girls can start their understanding of sex off on the right foot: with an understanding of mutual respect.

Some will say that this information is coming too early though. Parents are concerned that their kids are too young or that learning about sex will encourage them to do it sooner. To put it bluntly, each of these students is going to have sex at some point. The concern shouldn’t be so much about when that happens. The span of a few years is of minimal concern when there are more important issues, like whether a person’s decision to be sexually active is because of pressure versus desire or whether a student’s sex life (or lack thereof) is having negative impacts on self-esteem.

The repercussions of keeping sex ed taboo are obvious:

Those opposed to in-depth, honest sex ed curriculums need to also keep in mind that there is no re-education. To those who are part of the backlash, I’d like to ask: When is it appropriate for a person to learn about these things? Are you personally going to be there to give these students a re-education when you’ve decided they are “old enough” to become sexual people? Avoiding shedding light on these topics during one’s early teen years doesn’t set them up to approach that part of their life with ease in their mid-to-late teens or early adulthood.

I sat in the plastic chairs of my Ontario Catholic high school learning the last of my formal sexual education lessons. Those classes were heavy on the fear mongering and light on the point blank honesty I appreciated as a six-year-old. (The Catholic Church deserves just as much scrutiny as the province’s shoddy curriculum in my case.) Like many, I just turned to other resources. My personal sex education started with reversing much of what had already been spoon-fed to me by people who had no business forcing their personal agenda on my sex life. So I unlearned all of that.

What a waste of time.

“no means no,” and “yes means yes,” are the phrases that must be emphasized in our classrooms.