When I think of prison, I think of orange jumpers, hands and ankles shackled together with the chains scraping against the concrete floor and the terrible sound of rattling jail cells as batons graze against the metal bars—but maybe that’s because I’ve watched too much Orange is the New Black.

These traditional jails are often very costly to maintain, there is a high probability to reoffend, and consequently their effectiveness is constantly in question.

Now imagine you are a prisoner convicted of murdering a loved one, you are sentenced and sent to a prison that resides on an island, without being handcuffed, without cameras or weapons, with wooden cottages instead of jail cells, and dinner ranging from chicken to salmon prepared by inmates themselves. At first glance that may seem like a criminal’s distant fantasy, but in Oslo, Bastøy prison—which sits on an island 80 kilometres from Norway—offers a new perspective on how to treat criminals.

Bastøy Prison sits on an Island, a mile off the coast of Norway in a fjord, and is known as one of the most liberal prisons in the world 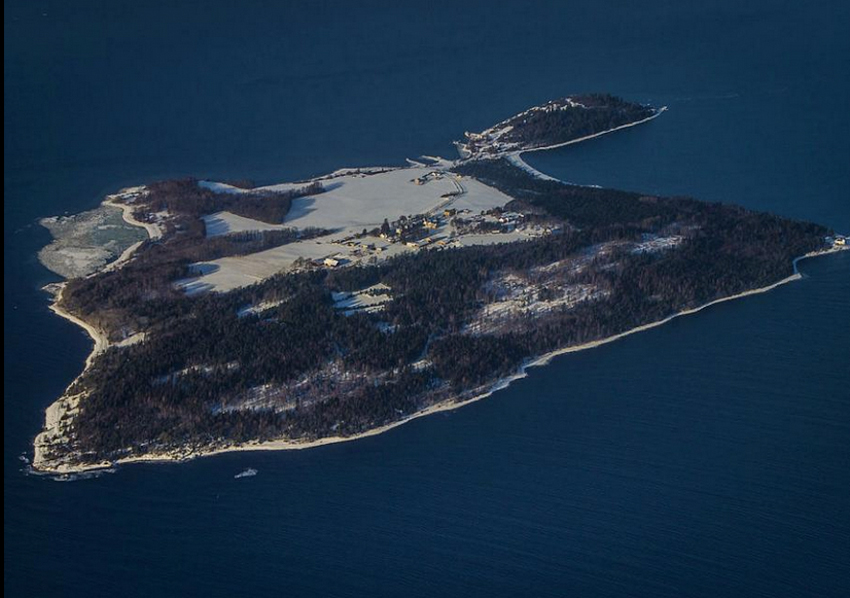 The island inhabits around 100 criminals with crimes ranging from murder, rape, drug trafficking, who are given job opportunities to better their skills for when they are eventually released back into society. Occupations range from farmers to ferry operators.

Officers don’t carry weapons, inmates receive a wage of about $10 a day, and they have an opportunity to pursue higher education if they want to, with a place to learn right on the island.

The purpose of this prison is to turn high profile convicts into functioning members of society. In a CNN article, Arne Kvernvik Nilsen, the prison’s governor said, “We should reduce the risk of reoffending, because if we don’t, what’s the point of punishment, except for leaning toward the primitive side of humanity?”

Here on the island, 115 prisoners live in communal cottages. Each cottage includes a kitchen, living room, and private bedrooms.

Only around 16 per cent reoffend after leaving Bastøy, which is the lowest in Europe, and when compared to the United States, which has around a 70 per cent reoffend rate, Norway may be a clever alternative to traditional prisons. The cost to maintain the facility is much less, since the inmates are practically self-sustaining; they cook their own meals, they maintain their own cottages, and there are no cameras or uniforms. In the U.S., the average cost per inmate ranges from $20,000 to $60,000, and for every 1,000 prisoners released it costs taxpayers from $554,000 to $1,645,950 annually due to the high rate of reoffending. There are much less people committing crimes in Norway as well, with 75 for every 100,000 people compared to 707 for every 100,000 in the U.S.

The basic principles of the prison are mutual respect and trust. Guards do not carry weapons. In American prisons, it is claimed that a culture of hostility between guards and prisoners allows violence to flourish

In Bastøy, inmates know how easy it is to escape since prisoners run the ferry and officers don’t carry weapons, but choose to learn valuable skills. In a Guardian article, Nilsen said, “In the law, being sent to prison is nothing to do with putting you in a terrible prison to make you suffer. The punishment is that you lose your freedom. If we treat people like animals when they are in prison they are likely to behave like animals. Here we pay attention to you as human beings.”

It’s the sense of community and purpose that helps rehabilitate these prisoners, as each prisoner has a specific job. At the end of the day, every prisoner still knows it’s a prison and wants to leave. “It’s still a jail,” said one inmate in a CNN interview. “In your mind, you are still locked [up].”

Believe it or not, inmates even have their own private sunbeds

Bastøy pisoners are encouraged to engage in sports like biking, fishing, running and tennis, horseback riding, and strength training. They even have their own bicycle shop to make repairs.

There are no walls to box them on the island. Yet in 32 years there has been only one escape attempt. Their boat capsized and they were caught. There is a strong incentive not to try this: If you are caught you are sent to a prison much worse than Bastøy.