Learning To Pull The Strings Of A Stranger’s Subconscious: NLP

Home » Learning To Pull The Strings Of A Stranger’s Subconscious: NLP

Neuro-Linguistic Programing (NLP), in short, is the method of performing mild hypnosis through conversation for the purpose of persuasion. By using certain verbal and non-verbal language patterns, an NLP master can trigger specific responses in their subject’s subconscious mind.

Derren Brown—for example—uses these techniques on his British television program to perform feats of supreme persuasion, mind control and mischief. Derren shows us the incredible power of tapping into the subconscious mind.

In the following video, Derren uses NLP, misdirection and hypnosis to pay for a $4,500 ring with blank pieces of paper.

As it happens, Derren isn’t the only one to pull off this kind of stunt. A few years ago an Italian “Hypnotist thief” stole nearly 800 euros from a female bank clerk, simply by asking for it after putting her under a trance. Unfortunately—unlike Derren—the thief didn’t return the money at the end of the trick.

Clearly, the ability to persuade someone from the inside out is a powerful skill. As such, NLP does tend to attract a greasy collective of eager salesmen, womanizers, con artists and crooked leaders. As we speak, I’m sure there are thousands of little Neil Strausses, and Jordan Belforts running around trying to apply the methods of NLP in a quest of hedonistic achievement.

Despite these cases of misuse and debauchery, NLP—founded by Richard Bandler and John Grinder in 1970’s California—wasn’t designed for the purpose of deceit. But where, then, is the line between influence and manipulation?

I met up with Linda Ferguson, Senior Partner of NLP Canada Training and one of Canada‘s leading NLP developers, hoping to gain some clarification.

Sitting in her ultra-hip office in the University of Toronto campus, Linda spoke to me in a soft meandering tone, pausing often and looking dead into my eyes. After about 10 minutes, a tingling sensation made its way down my scalp and through my body, putting me into a state of ultimate relaxation.

Damn it! She’s putting me under her NLP spell! I thought. Which she confirmed to me later when she told me that she knew I had been “going in and out of trance” the entire time.

As it turns out, NLP is grounded in the ability to make strong connections with others. If you make artificial connections, you will gain artificial satisfaction.

“The Game is a pretty accurate representation of what happens to people who try to use these techniques for connecting with people, and yet keep themselves separate. That kind of dissociation and emotional breakdown of relationships [in the book] is what happens when you use NLP in that way. If you distort your brain/body combination’s natural functioning then you pay a price for it. You distort it by trying to connect with people in a fake way. You get the emotional wear and tear.” Says Linda.

What NLP boils down to is effective communication with others and with self. If you practice NLP with a genuine, ethical approach, you may learn how to better solve problems, make connections and speak confidently/persuasively. 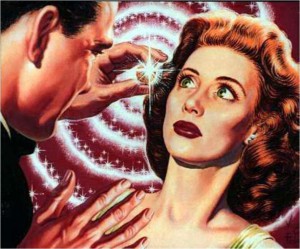 Later that night, I attended one of Linda’s NLP seminars on “How to Grow your Grit.” Half way through the seminar, I had gone into the same serene trance state that I had experienced in her office. At one point, she looked at me and said quietly, “You can come out of trance now,” with a wink, to which I instantly snapped out of my daydream, and looked around hoping no-one had noticed.

Damn it, Linda! Not again!

After the seminar, I asked Linda for a few simple NLP techniques to use in everyday life. I’ll share with you my favourite techniques described in detail in her book, Living your Purpose.

Want to change someone’s mind? Go for a walk with them.

At first I was surprised at the simplicity of this approach. According to Linda, when you’re walking beside somebody, you connect with them differently. The reason being, in order to walk beside somebody you need to be in unified rhythm. When you’re in rhythm, even your breathing begins to synch up.

Linda provides the example, “If you’re in a heated conversation and you want to disagree, you have to stop. There’s no logical reason you couldn’t keep walking and have a disagreement, but people never ever do.”

First, sit in one chair, and think about a problem that you’re struggling with. Immerse all of your senses and emotions into the problem. As you do this, pay close attention to your internal and external focus. What do you notice about the visuals, sounds and smells of the room around you? How has your posture changed, and what does your body feel like? Take a moment to write down your observations.

Next, sit in a different chair, and think about a situation you’ve had which is the exact opposite of this experience. Don’t second guess yourself. Stick with the first thing that comes to your mind. Now, immerse yourself completely in this memory and make the same observations again. Form a vivid re-enaction in your mind and try to understand and identify every aspect of the experience: how you feel, your posture, how you’re acting and the way that your senses interact with the world around you. Make notes if you can. 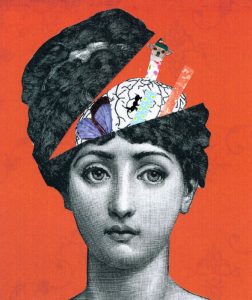 Lastly, move back to the first place you were sitting but this time keep the second experience strong in your mind. Re-read the notes you had made about the more favourable experience. Change the way that you’re sitting so that you fully embody this state of mind.

You may come to an immediate solution to your original problem. If you haven’t, keep switching back and forth between the two chairs until you can effectively apply your second mental state to the situation of your first problem.

Influence perspective by mirroring and matching:

One method of influence is mirroring someone’s verbal and non-verbal behaviour. People are most easily persuaded by someone they can relate to. Match someone’s speaking style, tone of voice and language. If they are relaxed and colloquial, then follow suit. If they speak with formality, do the same thing. If you can, follow their breathing pattern. Look them square in the eyes, and occasionally repeat what they say back to them. This is especially powerful if you can match their body language.

Is an argument moving in circles? Try switching seats.

If you find yourself in an argumentative stalemate, simply switch seats with the other person. By sitting in the other person’s seat, you will find it easier to see from their point of view. The simplicity of this technique makes it sounds slightly preposterous. However, if you give this method a try you may find yourself surprised at the difference that your physical state can have on your mental processes.

Remember, these are simple NLP methods, not the keys to absolute human mind control. However—as I had learned from Linda—if manipulation is your sole intention, maybe NLP is a weapon you should never pick up. The psyche of others is not a playing field.