Master Legend. Mr. Extreme. The Vigilante Spider. These are superhero names that you probably don’t recognize. The reason why you don’t recognize them is because they aren’t adorning the posters for the next hit Marvel film. They aren’t found in the long-boxes of obscure decades-old superhero comic books. Rather, these are the names of only a few of the individuals who identify as self-proclaimed Real Life Superheroes (RLSH)—guys and girls who patrol the streets of major American cities every night in colour-coordinated outfits, homemade masks, and the occasional consumer-grade defensive tool. They look a little bit like cosplay versions of characters that you’ve never heard of. And no, they don’t have any actual superpowers.

What they do have is a ton of heart, a strong desire to do good, and perhaps some stunted development issues. The superheroes they model themselves most after are the vaguely psychopathic protagonists of the movie Kick-Ass—individuals with a background in victimhood who see a gap in modern law enforcement and, being idyllic and impressionable enough to take direct influence from the comic book heroes they grew up with, decide to suit up themselves. This comparison has been made by the RLSH movement themselves; the film is noted as an “RLSH Inspiration” on the wiki that documents the movement, and the Real Life Superhero Project—an online hub that attempts to give the heroes a more legitimate face by presenting high-quality pictures and character biographies—was launched specifically to capitalize on the film’s release.

Knight Warrior is a gardener by day, and a masked crime fighter by night. His main targets are disorderly drunks who wreak havoc once the pubs have all closed. He also hands out food to the homeless people of the Greater Manchester area.

Thankfully, these caped crusaders are decidedly less violent than the ones in the movie, which is good because most of them are ill-equipped for physical activity. While some, like the acrobatic Zimmer and actually-probably-dangerous Z, are a little bit more physically able, most Real Life Superheroes are pudgy, middle-aged guys who have no real combat training. The HBO documentary “Superheroes,” directed by Michael Bennett, has a few scenes dedicated to this fact: Mr. Xtreme getting winded after going to town on a rubber dummy; a goggled individual by the name of The Conundrum boasting about having 6 years of parkour training, then flubbing a front flip; and then there’s Master Legend, a middle-aged, stringy-haired guy who mostly just drinks beer and catcalls attractive women.

The superhero life, then, consists more of reporting crimes to the police and doing community outreach. It is this facet that makes one sympathetic towards the movement, despite its rough edges. The thing that Real Life Superheroes do the most, it seems, is help the homeless, providing them with food and supplies. Perhaps most importantly, they give them hope—they listen to them, talk with them, treat them like humans. A touching scene in the documentary shows Life, a young RLSH clad in fedora and domino mask, being thanked profusely by a homeless man on his beat after providing him with a pair of pants and asking where he was planning to sleep that night. Life asks the man his name—it’s Lewis—and bids him farewell. There’s the Team Justice Christmas Drive, organized by Master Legend, where heroes band together to donate toys to lower-class children. On the Real Life Superhero Project, every single hero’s profile page ends with a link to a charity donation page, which range anywhere from the National Association for the Deaf to LGBTQ+ outreach program OutYouth.

So yes, it’s easy to write off Real Life Superheroes as damaged, or stunted, or clueless, and to an extent you’d be right on all three accounts. But I’m trying to think of the last time I did something nice for somebody I didn’t know, even something as simple as giving socks to the homeless, and I’m coming up short. These people do it every night.

When the sun goes down Mr. Extreme trades his security guard uniform for a cape, taser, handcuffs, army helmet, and three cans of pepper spray to stroll the crime-tormented sidewalks of San Diego. He has initiated several citizen arrests throughout the years.

Captain Australia is a stay-at-home father of two, who thinks that the sheer sight of him is enough to prevent crime. He claims to have stopped a sexual assault by dropping into the scene and terrifying two men who were in the middle of harassing a drunken woman. 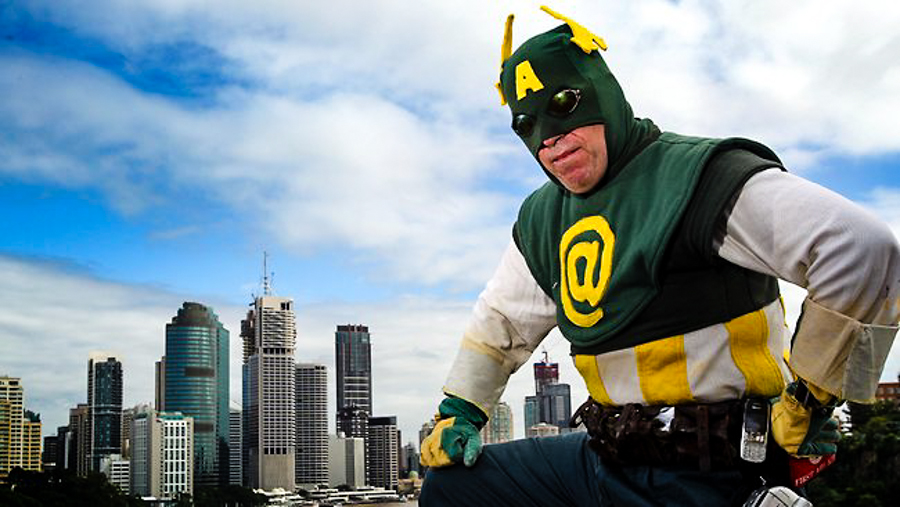 A mysterious vigilante in a batman costume was captured on CCTV dragging a wanted man by his collar into a police station and handed him over to stunned officers.

Menganno wears a suit and protective shield while patrolling the streets on a motorcycle.

Prowler is a real life Catwoman who gives a hand to New York City’s homeless in the early hours of the morning. By day she is a 31-year-old household clutter organizer.

Freedom Fighter focuses on breaking up fights, raising awareness and spreading goodwill in the community.

Phoenix Jones is a Seattle-based vigilante and mixed martial arts fighter who has suffered knife wounds, gunshots, street fights and was even arrested once for pepper spraying two suspects. He was inspired to don a mask after his car was broken into and none of the bystanders stopped it from happening.

There are countless other masked vigilantes who spread good throughout North America. Who knows, one might be protecting your city under the cover of nightfall? 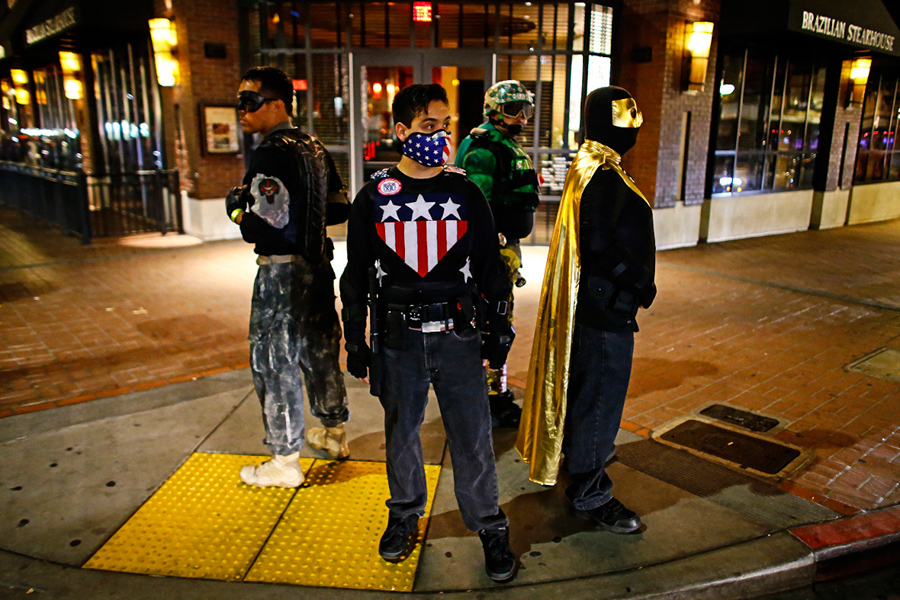